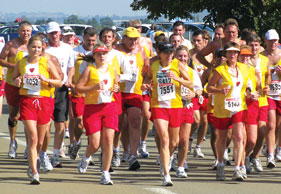 Runners in Gauteng jokingly refer to them as the ‘Cheese and Tomato Athletic Club’ because of their distinctive yellow and red club colours. Athletes from KwaZulu-Natal prefer to call them the ‘Superman Club’, referring to the Superman-like logo on their vests. Call them what you want, one thing is for sure: the members of Benoni Northerns Athletic Club (BNAC) have an unbelievable spirit of camaraderie and are loads of fun on the road.

Running clubs in the East Rand are known for their good relationships and friendly rivalries. Back in their heydays it was no different. In the 80s, clubs such as Springs Striders, Germiston Callies and Boksburg Athletic Club were at the height of their popularity, and the friendly partnerships between them lead to the establishment of Benoni Northerns Athletic Club (BNAC). Because many of the runners who frequented these clubs lived in Benoni, they felt it was time for a club in their ‘hometown’. And so in 1981, Benoni Northerns Athletic Club was born as a sub-division of Benoni Northerns, the local sports club. “It was not a breakaway, just a logical decision to form a club in the area where residents lived. Even today BNAC and Brooks Springs Striders have a very good relationship,” says Paul M’Crystal, chairman of BNAC.

BNAC was a strong club right from the start; between 1981 and 1988 they had about 60 annual Comrades entrants with between 12 to 16 finishing with silver medals. Some of the well-known BNAC runners who excelled at Comrades include:

WHAT’S ON THE MENU
BNAC is still a part of the Benoni Northerns Sports Club, which has different divisions including soccer and hockey. The club is based at the Northern Areas Sports Grounds (Albert Bekker Park) in Northmead and their current athletic membership stands at about 500. Almost 200 members, including about 80 novices, have entered for Comrades 2010. “This is the biggest number of entries we have ever had for Comrades. It is an exciting time for running. The majority of our members concentrate on road running and walking, but we also have interests in triathlons, track and cross-country events. The sections of BNAC are very supportive of each other. They train together and just before Comrades each year, the walkers host a social event for all Comrades runners,” says Paul.

TRAINING ON SCHEDULE
Most members train together six days a week and generally stick to the following schedule:

Tuesday and Friday
Runners and walkers meet at 5:15am at the club for a 10km run. “The faster guys keep on going back to fetch the slower bunch. We don’t want to leave anyone behind. When one starts running, you feel left behind when you are right at the back. If everybody has to wait for you, it feels even worse.
That’s why we implemented this system where the fast runners keep on turning back. It does wonders for club spirit,” says Paul.

Wednesday
Members gather at 17:45pm at the clubhouse for a 12-14km run. As Comrades approaches, mileage increases to about 20km. Often members only finish at about 20:00. There are four schools: a fast group, a Bill Rowan medal school, a medium pace school and a group who prefer not to focus on Comrades or long races. “We all follow the same route. These runs are usually great fun and very festive.”

The club has implemented a new training session on a Wednesday morning in which runners train to walk, and not to run! “Some of our runners read an article saying walking can improve their running. They immediately tried it out. Runners slowly jog to a certain point, walk briskly up and down some hills before slowly jogging back. This has been received well by our members, from the walkers to the Comrades runners who know they walk a lot at Comrades.”

Thursday
Walkers and runners get together on the corner of Langenhoven and Wilge Street for a hill session which consists of 400m hill repeats.

Saturday
Athletes meet every Saturday at 6:00am at the Virgin Active gym in Bedfordview for an 18-36km long run, depending on the time of season. “These are well attended and sometimes we have up to 100 runners,” says Paul.

Sundays
Sundays are reserved for an easy ‘plot trot’ in the East Rand or a race. “Anybody can join in on our training. We encourage participation. Just because you don’t belong to our club does not mean you can’t run with us,” says Paul.

TAKING THEIR TIME
Time trials (4km/8km) are run every Tuesday night at 17:45pm on the corner of Kei and Wilge Road (close to the Homestead Dam) in Farrarmere. It is a fast and flat time trial with no major hills. “Our time trial attracts a lot of members from the East Rand kayaking community. There are also a few school kids from the neighbourhood who have joined in. It is wonderful when the community participates; that is what it is all about.”

On the last Tuesday of every month the time trial venue moves to the nearby Ebotse Golfing Estate to provide members with something different. The route is run through the beautiful and peaceful golfing estate.

THE SOCIAL SCENE
Wednesday evenings are reserved for social nights. After the Wednesday night run, members get together for some refreshments at the clubhouse, and once a month, they fire up the braai. Often experienced runners will use this time to advise on different subjects such as nutrition or training. “We have found these talks not only help novices, but also experienced runners who sometimes need to be reminded of basic principles.”

At most big races members are well looked after and a supply of refreshments is always on hand at the club gazebo. “This is another way we build camaraderie. Novices often feel more comfortable asking more experienced runners for advice in an environment like this. We all have fun. Our gazebo is often the very last one to come down after a race. Races have become like a family event. We encourage family involvement, healthy living and fun,” says Paul.

The club has a traditional Aches and Pains party after Comrades where various prizes are handed out. Before Comrades, runners pay R10 and predict their own, or someone else’s, finishing time. The one closest to their predicted time wins the money! Another fun and encouraging aspect to Comrades is when the runners are divided into different Comrades groups. “If you bail, your group is immediately disqualified. This usually means runners from the same group encourage and motivate each other. At the Aches and Pains party we hand out a prize for the group with the fastest average time.”

RACING BENONI
BNAC hosts the annual Slow-Mag Marathon (5/21.1/42.2km), which will be held on 11 April this year. This race usually attracts close to 3 000 athletes and is often very popular, as many runners see it as one of the last Comrades qualifiers. “We are very lucky to have such a great sponsor as Slow-Mag on board. This year will be the 18th year that they are sponsoring us,” says Paul.

BNAC also hosts the annual Rowlin National Brokers 5/10/15km night race, taking place on 17 November this year. “This race has become synonymous with rain! It rains nearly every year, but a fair amount of runners still support us.”

A HELPING HAND
The camaraderie and friendliness of its members is what makes BNAC stand out, Paul explains. “No matter if you are first or last at a training run or at a race, there will always be someone waiting for you and congratulating you, often with a cold beer in hand!”