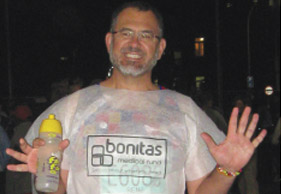 Not having enough time is a symptom of modern living. Between stressful jobs and trying to spend quality time with the family, exercise is often the first thing that falls to the bottom of our list. In a series of features on how to balance a busy career with running, Modern Athlete speaks to various high-powered businesspeople to find out how these great leaders manage to fit sport into their hectic daily lives. In this issue, we chat to Ren? Otto (50), CEO of MiWay, a financial services company offering a full range
of financial products and services direct to the consumer.

What is your background and how did you get involved in the business world?
I have a Masters degree in law from the University of Pretoria. I was a state advocate in the courts of Johannesburg for five years. In 1988, I got a job offer from Auto & General, where I had worked for eight years as a director. I realised I wanted to be in control of my own destiny and I knew I had the ability and drive to run my own business. That’s when I started OUTsurance in 1997. I was MD for five years and left when the business was profitable. I was involved in business consultation for two years,
before I joined Channel Life in 2004 where I became CEO. In March 2007, I started MiWay.

What motivated you to start running?
I wanted to lose weight. My brother, Jacques, was an excellent athlete and kept nagging me to join him at road races. My first race was a 10 miler (16km) at Jeppe Quondam. I couldn’t run with Jacques because he was too fast, but I met up with an old friend, Kobus Van Dyk. We ran together and I was hooked on running. I especially enjoyed the atmosphere after the race. Kobus and I agreed to meet the following weekend at another race. Shortly afterwards, we decided to run Comrades the following year (1984). We attended all the pre-Comrades talks and like two eager students, we followed our training
programmes religiously. Then we got a bit ahead of ourselves and decided we wanted to run silver, maybe too ambitious for first timers. We never got our silver medals that year, but I finished in a respectable time of 7:54.

How do you fit running into your busy life?
Running is such an important link to all other aspects of my life. When I run, I am able to concentrate better at work. It makes me feel good and that has a positive effect on my relationship with my four children and other people. Running has become a priority in my life. I plan where and when I can run. I don’t run in the mornings, but plan on which days I can get home early to run at 5pm. On Thursdays, I make a point of joining Phobians Running Club in Pretoria for their 8km time trial.

How many hours a week do you spend on the road and in the gym?
I run at least three times a week. When training for a race, I run four or five times a week. I also try to go to gym at least twice a week. I have reached a point where I am not a slave to running anymore, but rather try to fit it into my lifestyle.

How many more Comrades have you gone on to run?
I have done 11 Comrades. Kobus and I both ran silver in our second Comrades in 1985. After six consecutive Comrades, I skipped a few years. In 1993, I ran my seventh Comrades, but stopped again for a couple of years because of injuries. Kobus and I also lost contact and it was hard for me to train alone. In 2002, at the age of 43, I went through a difficult time. I got divorced and felt a strong need to rebuild myself; the best way I knew how, was through running. It gives you purpose in life and makes you feel good. Between 2002 and 2005, I completed numbers eight, nine and ten. After that, I had a knee operation and started cycling, but I missed running. On 16 February this year, my old buddy, Kobus, phoned and said, “Partner, we both turn 50 this year. Let’s run Comrades!” And so we did. I asked friends, family, loved ones and business connections to pledge funds to the Starfish Foundation, on condition that I earn a medal. I finished in a time of 11:41:35. The fund is currently sitting at R120 000 and money is still pouring in.

What do you see as the biggest obstacle to your running?
Time is always a challenge, especially when you have a family. Injuries have also hampered my performance in the past. By now I have learned how many kilometres I can do before injury. I have
reached my potential. My silver medals in Comrades and Two Oceans are the best I can achieve, given
my frame and ability.

Has running influenced your career and work ethic?
Definitely! Running has taught me the worth of consistency, focus and having a balance in life. If you want to achieve something, be it in work or running, you have to put the hours and work in. But you have to work and train smartly. Overtraining will lead to injuries and if you try and work 14 hours a day, you will become inefficient in your job. Running has made me realize that you do have limits, but you can also shift the goal posts, often achieving more than what you thought possible. When I ran my second Comrades and got a silver medal, I was just as proud of myself as Bruce Fordyce must have been
winning that year.

What is the best and worst advice you have been given with regards to running?
My brother advised me to never start too fast, not while training and not in races. When I start, I run very slowly for the first 20 minutes. Once, I read an article in which someone said that stretching did not help their running. I strongly disagree. To me stretching is not only therapeutic, but also essential.

What is your proudest moment in running?
The best race of my life was in 1987 when I finished the Two Oceans Ultra Marathon in 3:57. To get a silver medal at Two Oceans is a lot harder than getting a silver medal at Comrades. If you want silver in Two Oceans, you have to run at an average pace of 4:15 and reach the marathon mark in subthree
hours. That’s when the race really starts, because you still have 14km left and you have to run up Constantia Nek at the same consistent pace.

And in your business?
The first time OUTsurance started showing a profit.

Most embarrassing or worst moment in running?
My worst moment was when I heard I had to be operated on for a knee injury and I knew I would be out of running for a long time.

And in business?
I haven’t had bad moments in business. I believe every time a door closes, another one opens, often offering better opportunities.

The thing I love most about running is…
The runners high I get after 40 minutes on the road.

After a run the first thing I like to do is…
Stretch and take a shower.

My greatest ambition is to complete…
The Iron Man as well as a marathon on each continent.

Do you regret anything?
I never got a Bill Rowan medal. In the days when I ran sub-nine hours, there weren’t Bill Rowan medals at Comrades. That’s probably why I still have this thing in the back of my mind to go out there and get my Bill Rowan.

I don’t enjoy being beaten by…
(laughs) Someone that is clearly overweight and has no right to be running faster than me.

I enjoy training most…
On my own.

Who are your running role models?
In earlier days, it was Bruce Fordyce and Bob de la Motte. I also admired my brother. He now lives in England and doesn’t run much, but years ago he ran a sub 2:20 marathon. Not bad for a medical doctor, who had to fit training into his busy life.

What is your favourite meal after a big race?
A juicy steak and a glass of red wine.

I could not go running without my…
Running watch. I am very focused on time.

What would you say to someone who says that they don’t have the time to start running?
You are bluffing yourself. Exercise should be a priority.

What is your life motto?
There are no securities in life, only opportunities. If you accept this, you will take responsibility for your own life and start looking for opportunities.