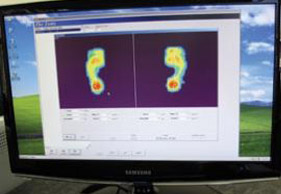 The average runner strikes about 600 times per kilometre. Somebody who weighs about 70kg lands with roughly 120 tons of force per square centimetre per foot strike.

Does this get your attention? Now imagine your foot is not striking correctly; that means your ankle is not working properly, your knees are under strain and a whole lot of muscles are trying to counteract the imbalance. Are you still wondering why you have that niggling injury you just can’t seem to sort out? Maybe it’s time you start paying attention to your biomechanics.

INJURIES
The foot is a complex structure made up of 26 bones, 33 joints, 107 ligaments and 19 muscles and tendons. With all the pressure we put on our feet every day, it’s no wonder that many runners land up with knee, hip, back and even neck problems because their feet and legs are not aligned correctly. Many running injuries are caused by over training, lack of stretching and in fact a large percentage of all lower limb injuries in sport are caused by poor biomechanics, say Franklin Dubowitz, podiatrist from the Centre for Sports Medicine and Orthopaedics in Rosebank, Johannesburg.

Running is a repetitive action and if your biomechanics are not working properly, it is bound to cause problems. “South African runners are out there every single weekend, winter and summer, and many run crazy distances. A lot of athletes don’t take care of themselves and ignore pain or slight niggles. Some leave it so late that they end up with serious injuries,” says Franklin.

Very few people are 100 percent balanced and aligned. Most of us supinate (roll outwards) or pronate (roll inwards) to a certain degree, and it is normal to pronate within certain perimeters, therefore it is not everyone needs intervention. Running shoes play a role in helping with problems such as excessive supination and pronation, but in a lot of cases, shoes are just not specific enough. That’s when you should start considering consulting a podiatrist. “If I measure the way you strike with your feet and one foot has a 15? of pronation while the other foot has a 24? of pronation, how can you expect one set of running shoes to work for both feet?” says Franklin, who has treated sporting stars such as Shaun Pollock, Graeme Smith, Sachin Tendulkar and most other members of the Indian cricket team.

THE OLD AND THE NEW
Most of us know the traditional system of orthotics, where an impression of the foot, called a plaster cast, is taken while the patient is sitting in a non-weight bearing position. Podiatrists use this cast, as well as computer technology, to design a device that balances and corrects problems. This process normally takes anything from a couple of days to sometimes a few weeks, a sometimes frustrating waiting period for someone in a hurry to sort out their injuries. New technology now allows for orthotics to be made instantaneously in as little as an hour including consultation; a first in South Africa, says Franklin.

You can walk out of the consultation room with your new pair of orthotics in your shoes and you can be sure it’s going to be a pair that is flexible, comfortable, functional and transferable. Franklin does not work with rigid orthotics. “One has to remove the abnormal movement of the foot but at the same time still allow for the normal movement. Your foot has to be able to move and absorb shock and that is the reasoning behind more flexible orthotics,” says Franklin.

In Sachin Tendulkar’s case 11 years ago, rigid orthotics were the cause of his stress fracture. “He battled to run in the hard orthotics and eventually flew in from India to see me. We manufactured a special orthotic and within seven days he was up and running. That orthotic is still known today as the Tendulkar orthotic,” says Franklin, who has been treating runners, amongst others, for 27 years.

THE PROCESS
A patient is assessed by a video gait analysis system while running or walking on a treadmill. Four high speed cameras record the foot strike from all angles. This information is recorded instantaneously on a computer. While playing back the recording, one can see how the patient is landing and how the foot moves through the gait. “We can slow down the recording and dissect the leg, ankle and foot from each and every angle and establish whether the patient is supinating or pronating,” says Franklin. He is strongly against methods of assessment where the patient runs up and down an alley in order for a podiatrist to diagnose what the problem is with the naked eye. “Your eyes are simply just not quick enough to see exacts,” says Franklin.

The best method of assessment is a video gait analysis system, used by a many podiatrists these days. Usually, an additional analysis is done where the patient walks across a pressure plate. Information about the stride, pressure points (superficial and deep seated), possible supination or pronation, and a comparison between your left and right foot are recorded on another computer, which shows two and three dimensional images of pressure under your feet. It also shows the exact movement from heel strike to toe-off. In more traditional methods of treatment, this information helps podiatrists with the manufacturing of orthotics in a laboratory.

New technology changes all of this. In many cases, orthotics can now be manufactured instantaneously in the comfort of the consultation room. You can walk out with the orthotics in your shoes, says Franklin. It works like this: first a ready made module which fits into your shoe gets chosen for your specific sport or daily activity. These modules, of which some are made of carbon fibre, are imported. Previous information gathered from your stride, pressure points and possible supination or pronation help Franklin to manually adjust the mould around your feet until it feels comfortable and is customised to your specific problem. The success of the system is that your orthotics are made under weight bearing circumstances, which allow them to feel soft, light and flexible. All adjustments are made while you are standing on the orthotics in the machine. A negative impression is done with the assistance of a sophisticated pressure sensor plate. The selected module is then pre heated and laminated. It is inserted into the digital mould and the patient is then asked to stand on the machine once again to allow the module to set in the required position. The patient steps off and the orthotics are done.

Remember, this machine does not perform magic and all orthotics take time to get used to. One should at first walk with the orthotics before attempting to run. Wearing orthotics also does not mean that you will never get injured again, but, according to Frankin, your chances of injury are greatly reduced.

If you have an injury or a niggle and you are not sure whether you need the help of a physiotherapist, a chiropractor or a podiatrist, consult a sports physician, who can steer you in the right direction.