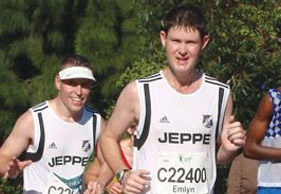 The Jeppe Quondam Club was founded in 1907 as an old boys’ sports club for the famous Johannesburg school. The athletics section was established when the late Theo Jackson, an old Jeppe High School pupil, started morning runs from his house in Edenvale with a few friends in 1976.

Theo did not realise at the time that he was to be the founder of a running club which now boasts over 300 members and is rated as one of the finest clubs in the country. Theo ran for Jeppe for 19 years before passing away suddenly in 1995. He left the club in good hands and today its high spirit and camaraderie pay tribute to Theo Jackson.

Over the years, Jeppe has become a strong social club which caters for all types of runners, from walkers to the elite. If you are a beginner and find the thought of running daunting, then you can start with the walking section and progress through the four schools the club offers as your fitness levels improve. Each school has a captain who follows a set training programme and manages the progress of the runners in their section. The model works exceptionally well as it places no pressure on individuals to keep up with athletes that are in a league above them. Individuals can decide if they are happy to run in the same school at the same pace each morning or if they want to test themselves and move up a school.

The four official running schools are determined as follows:
A SCHOOL (pace between 4 and 4:30 per km)
The A school caters for serious runners who are looking to speed up their times. Captain, Gary Smith, nurtures the natural talent of the club’s PDI group, that is, those who constantly perform well at major races and are regular silver medallists at Comrades. With professional clubs now attracting the most talented athletes and some of the Jeppe legends joining the master ranks, the size of the elite squad at Jeppe has shrunk over the years, but is poised to grow again in the near future. Gary has run 15 Comrades and collected 14 silvers along the way.

MIDDLE SCHOOL (between 5:00 and 5:30 per km)
This is one of the strongest social groups at the club. Middle-of-the-pack runners who have a great deal of fun whilst training, but are still very competitive when the going gets serious, make up the bulk of this school. Captain, Peter McCann, has been with the club for 14 years. Peter has just joined the master’s category and is currently enjoying some of the best times he has run in recent years.

B SCHOOL (pace between 5:45 and 6:15 per km)
The B school is often the transition school of the club and hence a critical wheel in the cog. Beginners spend some time under the watchful guidance of Bev as their running evolves. It is here that they get faster and move on to the middle school. On the other end of the scale, older runners who are losing their speed come back to the B school to focus on enjoying the sport and to stay on the road amongst friends. Make no mistake, this is a very competitive bunch and probably the most consistent in terms of performance. Bev has run approximately 14 marathons, six Two Oceans and one Comrades with personal best times of 1:58 for 21.1km, 4:14 for 42.2km and 10:49 at Comrades.

SUE’S SCHOOL (pace between 6/7 minutes per km)
This it where it all starts and ends for runners at Jeppe. This amazing group of runners comes out every day just because they can and they love running. This sector was previously known as Andy’s school, having been captained by Andy for many years before being passed on to Sue. Between them, they have nurtured the running careers of many of the club’s members. It is not uncommon for a beginner to start in Sue’s school and run their fi rst Comrades the following year. This school is the perfect place to catch up on all the gossip while getting a good morning jog out of the bargain.

LINDY’S WALKING SCHOOL (weekday walks are 6km)
Lindy started the walking section of Jeppe in 2007 and it has grown from strength to strength. Bedfordview is a beautiful suburb to walk in and there is no better way to start the day than with some good friends and some brisk exercise. This is the perfect way to start exercising on a regular basis and to increase fitness levels. There is also encouragement to make a transition from walking to running, as more and more walkers are entering races these days.

Depending on the season, the schools all run between 8km and 14km on a weekday morning with longer runs on Saturdays and Sundays. All runs begin at Jeppe Quondam club and weekday runs start between 5am and 5:15am,with weekend runs from 6am.

Triathlon
The Triathlon Section was formed by default in 1995, when a group of runners (Alfie Pain, Dario and Eddie Oliver, who are all still members of Jeppe) broke out of the Comrades mould to try their hand at multi-sports events. Jeppe runners then started following suit, showing interest in swimming the Midmar Dam, and in doing the Argus and 94.7 cycling events. When Triathlon South Africa became a proper body and started organising SA Champs, Derek Maricisz, who is an ex-South African Marathon Champion and holds the fastest marathon time in Jeppe (2:17), was instrumental in getting the ball rolling and organising proper training for Jeppe’s up and coming triathletes. Nearly 15 years later, the list of achievements is huge. There has been SA representation every year without exception either in the duathlon or triathlon sections. Recent SA representation in duathlons include:

To compete in the World Iron Man, held in Hawaii, athletes have to be invited.
The most recent Jeppe members to be invited in their age groups are: Ken Poole, Rob Coulson and Trevor Wolfson. If there are any athletes out there, looking for an avenue in competitive terms other than running, Jeppe is a great club to consider joining.

Pick n Pay Marathon
The Pick n Pay Marathon was run for the 25th time in 2009. This event is hosted by the Jeppe Quondam Athletics Club and sponsored by Pick n Pay. The race is run through the suburbs of Bedfordview and Edenvale in Johannesburg and has quickly become a very popular event with athletes looking to qualify for the Comrades Marathon and the Two Oceans Marathon each year. This was evident in the record number of runners who attended this year’s event. Jeppe Quondam Athletics and Pick n Pay, hold a very festive and family-orientated event. In addition to the 42km and 21km races, there is a 5km fun run and children’s short events on the playing fields at the venue. The Pick n Pay Marathon has over the past ten years, allowed Jeppe to help fund 15 previously disadvantaged runners as club members.

Great People
As with any organisation, you are only as strong as your people and Jeppe is fortunate to have some great people. Dwight Thompson, Barry and Debbie Holland, Joanne and Declan Kavanagh, Douglas Ramaphosa, Kim Pain, Morag Glunz, Linda Lees, the Valasis brothers, Pat and Andy Michalaro, Gary Smith, Alan Carrington, Derek Maricisz and every member who wears the black and white contribute to making this club special.

Through the contribution of its fine runners and all those who hold posts within the club, Jeppe’s reputation as one of the greats has been created and is being maintained under the watchful eye of Declan Kavanagh. No detail is left unattended, from having tents at the finish lines of all major races for its members to the measuring of routes to seconding vehicles carrying drinks and snacks on weekend training runs. The club has also been at the forefront of the evolution of club running kit in the country. It is hard to miss the white Adidas Jeppe Climacool fabric t-shirts and vests on the road. They certainly set the fashion trend and some of the female members say they’ve moved just because of the great kit.

A CLUB THAT CARES
Jeppe has a tradition of raising funds for charity through two annual events, a golf day and a year-end festive season hat walk/jog. These events are exceptionally well-organised and professionally run, and the results are a testament to this. Jeppe has donated astonishing amounts to charity over the years and has touched the lives of many in need. Over the last ten years, the golf day has been built up so much that it is now accepted as one of the best events of its type in the Johannesburg area. Using both the east and west courses at The Royal Johannesburg and Kensington Golf Club, the event is always a sell out. It offers not only great value for money but also exciting prizes and entertainment. Funds raised through this prestigious golf day go towards the Theo Jackson Bursary Fund, which is aimed at providing bursaries for underprivileged and financially disadvantaged potential pupils who wish to enrol at Jeppe High School for Boys but cannot afford to do so. The second event, the Jeppe Charity Hat Walk/Jog, is an event that is anticipated not only by Jeppe members, but also by members of the surrounding  communities. This event was started in December 2005 as a fun walk and has grown in size every year, with over 600 runners and walkers taking part on the day. In fact, it has now gotten so big that the route had to be altered to accommodate the event logistics. The roads are full of families walking/jogging through the streets, all with funky hats on their heads. This event supports local charities with monetary contributions from the sale of the tickets, as well as non-perishable and perishable groceries which are collected for the charities.

1 928 COMRADES MEDALS
Jeppe is a club with a huge Comrades Marathon history. Over the years, its members have accumulated a total of no less than 1 928 Comrades medals and its annual training programme always comes to a head with this great event as its ultimate goal. Any runner who decides to take on the ultimate human race should consider taking on the experience and knowledge of the members of Jeppe. Jeppe has 76 entrants in this year’s race, many of whom have run ten or more Comrades! In 2008, the club had six silver medallists, with Raymond Phalandi finishing in 62nd position in a very respectable time of 6:31. The training programme builds up from a weekday 8km run to longer runs of 14km as winter sets in.

Jeppe has a committee that has been constructed with the specific intention of looking after all members leading up to the Comrades and on the day. Some of the exclusive advantages afforded to Jeppe members include: long runs with seconding teams during training; a pre-race breakfast the week prior to the race so that runners can preview the course; branded memorabilia for each runner taking on the challenge; branded club watering tables every 15km in the race; and an ‘aches and pains’ post-race  breakfast the morning after.

One couldn’t be blamed for thinking that 136 for 4 is the latest cricket score. In fact, 136 is the number of medals accumulated between four of Jeppe’s members since they began their running careers. The four members currently holding this record are some you might have heard of, namely Barry Holland, Ken Holm, Jeremy Garden and Roger Swanevelder. Barry leads the pack with 36, Ken and Jeremy have 33 each and Roger takes up the rear with 30. What makes this total even more special? This figure is bound to increase, as Barry, Ken and Jeremy have all entered this year’s race. These running legends personify how committed Jeppe is to the Comrades marathon.