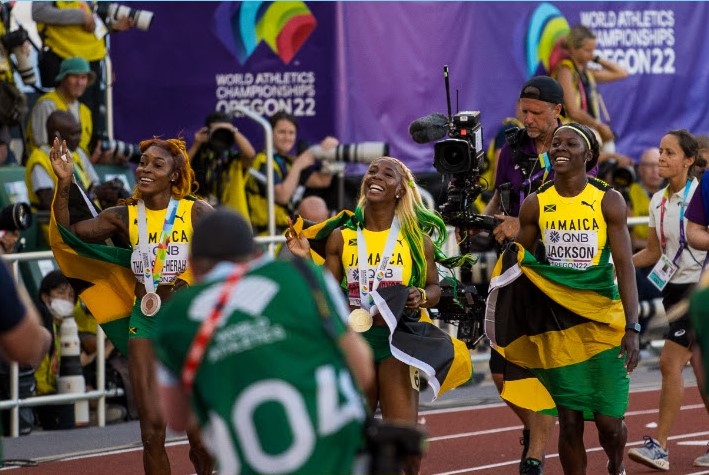 Right, I’m sitting down to write this World Champs blog just after watching two incredible 200m finals, which wrapped up the programme for day seven of the Champs in Eugene, and I’m still buzzing. – BY SEAN FALCONER

The 200m sprint often plays second fiddle to the 100m at the big meets, like Olympics and World Champs, because the shorter sprint is seen by many as the premier event of athletics, the one that gets all the media coverage, and crowns the king of athletics. Ask the average Joe spectator of the big athletics meets who won the 100m and they get the answer right, but the 200m? Chances are they won’t know. It’s not that the 200m is ignored or forgotten, it’s that the 100m just gets more hype and coverage. But there is something really special about the 200m.

Where the 100m is about raw speed and power (on top of the intricacies of starting, maintaining form, not tensing up, etc), the 200m brings in a tricky technical aspect with the running of the curve in the first half of the race, followed by the proverbial million dollar question: Which athletes can maintain top speed most consistently in for the second half. For that reason, watching the heat maps of each athlete in the live coverage was fascinating, seeing which athletes decelerated the least as they hit the last 50 metres. While running is (supposedly) a simple sport – you just one foot in front of the other as quickly as you can – there is also a fascinatingly intricate technical side to every event in the sport, from the 100m to ultra-distance races.

Local Hero Does Us Proud

Before I talk about the winners, I first want to say a few words about our own Luxolo Adams. I was absolutely thrilled to see him lining up for the men’s 200m final in an absolutely stellar line-up. As I wrote in yesterday’s blog, he has had an amazing season, breaking through the 20-second barrier and winning a Diamond League title in Paris, and now he’s appeared in his first global final. Just as is the case with Akani Simbine making 100m finals at this level, it’s a far cry from not so very long ago when we didn’t have any South African sprinters performing at that kind of level. Now to have a finalist in both the 100m and the 200m at this World Champs, added to other success the country has enjoyed in sprints and relays in recent years, really warms this South African heart!

I know some may point to the fact that Luxolo finished eighth out of eight finalists, and that his time of 20:47 was a little disappointing, given that he clocked 20.09 in the semi-final and ran that 19.82 less than a month ago, but one has to factor in that finals are super tense, with athletes making extra sure that they do not false start and get DQed after doing all the hard yards to make the final. Also, the final is usually the third race in jus ta few days for these athletes, so there is also a fatigue factor that can affect times. All that said, I choose to focus on Luxolo making his first global final, and I hope it is just the first of more to come.

Now to the winners. In the women’s race, Jamaican Shericka Jackson proved that her 21.67 in the semi-final was no fluke as she went still faster in the final, clocking 21.45 to not only shatter her 20.55 PB, set in the Jamaican Champs less than a month earlier, but she became the fastest woman alive over 200m by clocking the fastest time since the late Florence ‘Flo Jo’ Griffith Joyner set the World Record of 21.34 way back in 1988. Jackson has often played ‘bridesmaid’ or supporting cast to her Jamaican compatriots, five-time World Champion Shelly-Ann Fraser-Pryce and four-time Olympic champion Elaine Thompson-Herah – she finished third, behind them, in the 100m final at these World Champs – but today she ruled supreme, and her post-race celebrations were a joy to watch.

Then came the men’s 200m final, and the USA’s Noah Lyles successfully defended the title he won at the 2019 World Champs in Doha – and probably also redeemed himself, in his own eyes, for ‘only’ winning bronze at the Olympics last year. Like Jackson, he also looked unbeatable as he led home US compatriots Kenneth Bednarek (19.77) and Erriyon Knighton (19.80) for another American clean-sweep of the podium, as they did in the men’s 100m final. But it was Lyle’s winning time that really stood out. Coming into the final, his personal best was the 19.50 he ran in 2019, and his season best for 2022 thus far was the 19.61 he ran in New York in June, but he blew the final away with a new PB 19.31, which moved him up to third place on the all-time list for the 200m. Only Jamaicans Usain Bolt (19.19 & 19.30) and Yohan Blake (19.26) have ever gone faster.

After he won and realised just how fast he had managed to go, Lyle ripped the top of his running suit as he celebrated. To be honest, I am not always a fan of the way some athletes behave on the track, especially the sprinters, and especially the Americans, but this time I was OK with it. The performance merited going a little crazy.

Now we have three days of competition left, and there is still a lot to look forward to. Last night Prudence Sekgodiso made it into the semi-final round of the women’s 800m, taking place later today, as will be the heats of the men’s 4x100m relay, where we hope our SA men can do make it through to the final, but the big one has to be Wayde van Niekerk in the men’s 400m final. And the mouth-watering women’s 400m hurdles will round out the programme. So that’s where I will be in the early hours of the morning. 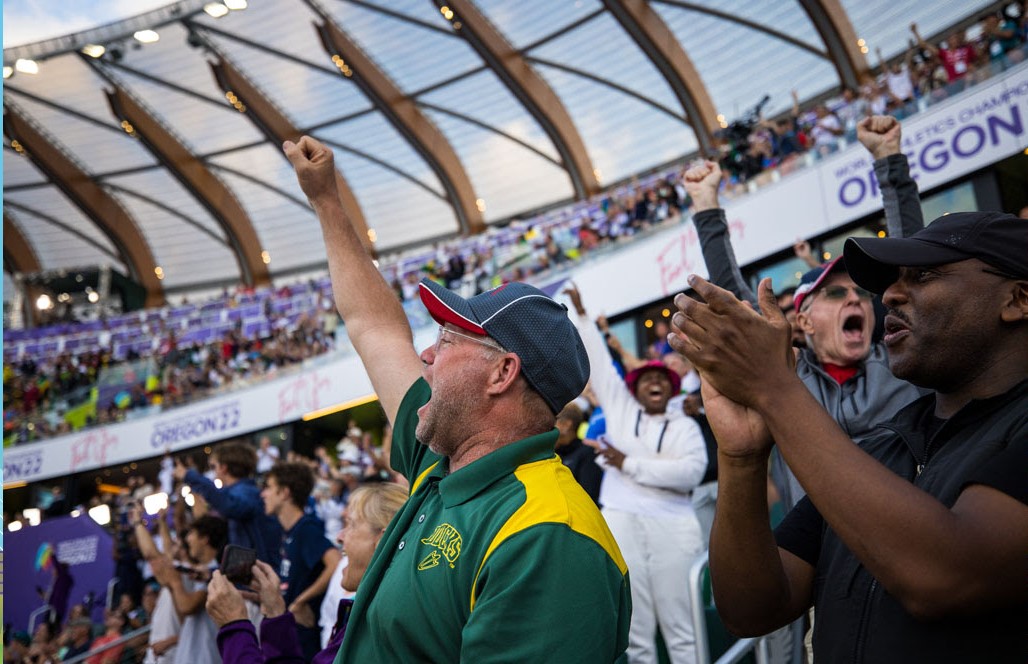 So, we’re coming up for day 7 of the World Athletics Champs in Eugene in the USA, and what a Champs it has turned out to be. I’ve seen various colleagues, friends and other fans of track and field on social media talking about goosebumps, and getting emotional, as they’ve watched the action live – even when it required staying up till the early hours of the morning to catch the action live. – BY SEAN FALCONER

There is a nine-hour time difference between SA and Eugene, Oregon, on the West Coast of the USA, so the evening sessions of the World Champs generally start around 2am our time, and continue till 5am or 6am, so I reckon there are a few rather sleep-deprived athletics fans this side of the Atlantic after a week of action.

Yes, there were a few issues with some athletes not able to get to the USA due to VISA issues, but in general, this has been a terrific meet. I’m not even going to try to list all the top performances here, as there have been so many, but I would like to mention some personal highlights that I particularly enjoyed.

Anyhoo, enough rambling from me for one blog, let’s look ahead to see what’s coming up next.

Watch for our local heroes in the following events: