The world’s elite athletes are all running in plated shoes these days, because very simply put, they make you faster, and if you have that same need for speed, you should give the PUMA Deviate Nitro a try. Ed Sean Falconer gives his views on the latest PUMA shoe.

Over the years, I have found it interesting to watch the development of the tech in PUMA’s shoes. One of their projects that stood out for me was Mobium technology – introduced around 2013, if my memory serves – which featured a thin figure-of-eight bungee cord built into the midsole, which contracted and stretched with your foot to give the shoe better rebound properties. It was an interesting concept that unfortunately didn’t really hit the spot with the running market, but I give PUMA points for trying something new.

Now PUMA have come out with the Deviate NITRO, which the company describes as a “max cushion shoe with improved efficiency for long runs.” But that’s just marketing speak, and could just as easily describe every other running shoe on the market. No, the real story here is the new tech, and it starts with the carbon-composite plate embedded in a nitrogen-infused midsole!

The midsole is made from PUMA’s new NITRO foam, which is a supercritical material that provides a lighter and bouncier ride than previous midsole materials from PUMA, even their IGNITE foam. In layman’s terms, they pump nitrogen into the compound as it is formed and baked, which then creates subtle bubbling that ensures better cushioning and springiness in the midsole. 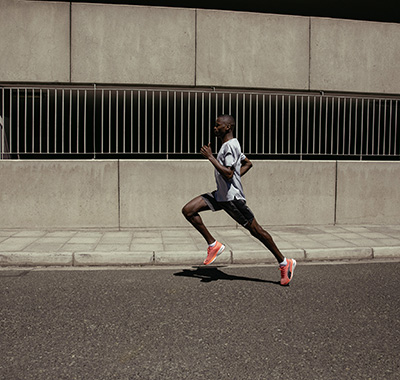 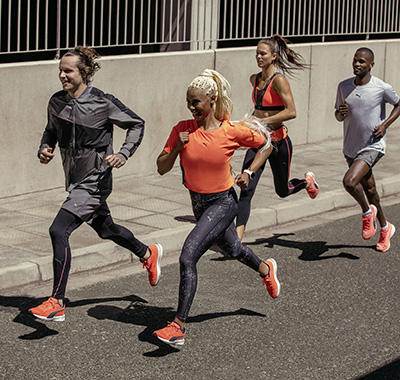 PUMA then added the carbon-infused INNOPLATE, sandwiched between two layers of NITRO and running till midway in the forefoot. This plate is designed to really make your toe-off ‘pop’ as the shoe helps to propel you forwards… much like PUMA’s Mobium band was designed to do, but this is so much more effective and efficient!

When I ran in the shoe, I found it a little on the rigid side at slow speeds, but that’s understandable – this shoe is designed to help you go faster, after all. Once you get up even a little speed, and pivot ever so slightly more forward than you may be used to doing, those plates really kick in. Overall, I felt the shoe gave me the right balance between soft cushioning on landing and a snappy take-off.

The tooling of the shoe is rounded off by a PUMAGRIP outsole, which is particularly effective in the forefoot to ensure firm grip on the road as that plate does its ‘slingshot’ act. After all, the last thing you’d want with that extra power is loss of traction, like an over-revved car spinning its wheels. The stack height drop is 8mm (32mm in the heel, 24mm at the toe), which is pretty standard stuff for a well cushioned running shoe.

The mesh upper of this shoe is breathable and looks both modern and cool – and personally, I love the bright orange colour, because I like my running shoes to look fast! The upper has minimal overlays, which is good – while they provide structure and form to an upper, they can make it less flexible and giving, and I think this shoe has just the right amount.

Furthermore, I like that the tongue has minimal padding and is gusseted (attached to the footbed), meaning it stays in place throughout your run, but at the same time my wider foot found the forefoot area roomy and comfy enough. That’s an important consideration for me, given that PUMA did build some of its shoes on a narrow last in years gone by, which I found too tight.

However, there was one part of the upper that rubbed me up the wrong way at first. The first time I put on the shoes, I noticed slippage in the collar around my ankle, and I put this down to the interesting design of an unpadded collar with two prominent pads a little lower down that wrap each side of the heel. I also found that the slightly harder upper edge of the heel cup area was digging into my Achilles. I therefore put the laces through the extra eyelets closest to the ankle and synched them really tight, and that took care of the slippage, and to a large extent the Achilles irritation as well, but I did find that thicker socks were better.

…But the Ride Solves That!

That said, once I got up to speed in the shoes, I quickly forgot about the collar, because the performance of the rest of the shoe was so good! This shoe seems to promote forefoot striking and a quicker toe-off, and thus the collar of the shoe doesn’t play nearly as prominent a role as it would if you were heel-striking and squishing down on your heels. So, my take on this is that each individual runner will need to experiment with lacing and socks to find the most comfortable fit, and when you get that right, you will feel the real benefit of these shoes and their snappy forefoot. 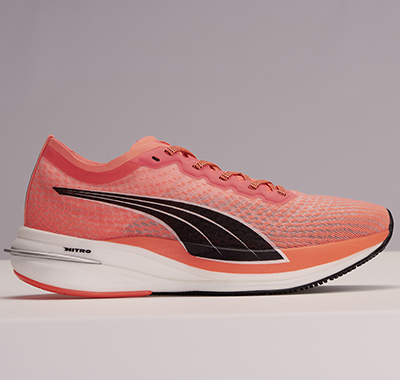 Get Them Here: The PUMA Deviate Nitro retails for a recommended R3999 and is available from PUMA stores and at PUMA.com