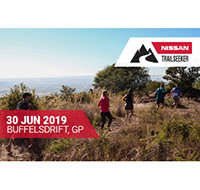 Just North of Pretoria close to Roodeplaat dam, lies a bushveld haven filled with trails made up of farm roads, cattle paths, dual tracks and strategically designed single track for mountainbikers and the NISSAN TrailSeeker event. The terrain is hard and rocky amongst the grasslands and boasts rivers and canals. Wildlife can often be seen on these routes, so keep an eye out for some antelp[e. The routes form part of the popular Buffelsdrift MTB Park.

The New PRAM-JAM family event is run entirely on it’s own unique pram and kids-bike friendly routes, the idea of this event is to get kids and parents out in a safe environment taking part in events with like minded outdoor families. Routes will mostly be on dirt farm roads with no traffic.

The 5km trail run is suited to runners of all abilities, but is sure to have some unique and fun trails on offer, the route will also have a world class feed station to replenish on fluids and energy.

The 10km trail run is aimed to be more of a challenge, runners needs to be prepared for some challenging terrain along with 10km of absolute bliss trails, little to no overlap with the other distances and two well stocked feed stations along the way.

The 21km trail run, this is for the serious adventure seekers, we will combine the best trails and biggest hills we can find in the are to challenge you, however will make sure the fun factor is the main aim for the day! The trail will be on single tracks, and jeep tracks, with some surprises along the way…

There will also be 3 well stocked feed stations along the way to make sure you don’t run out of energy.r Trail Run #1 – Legends MX 2019