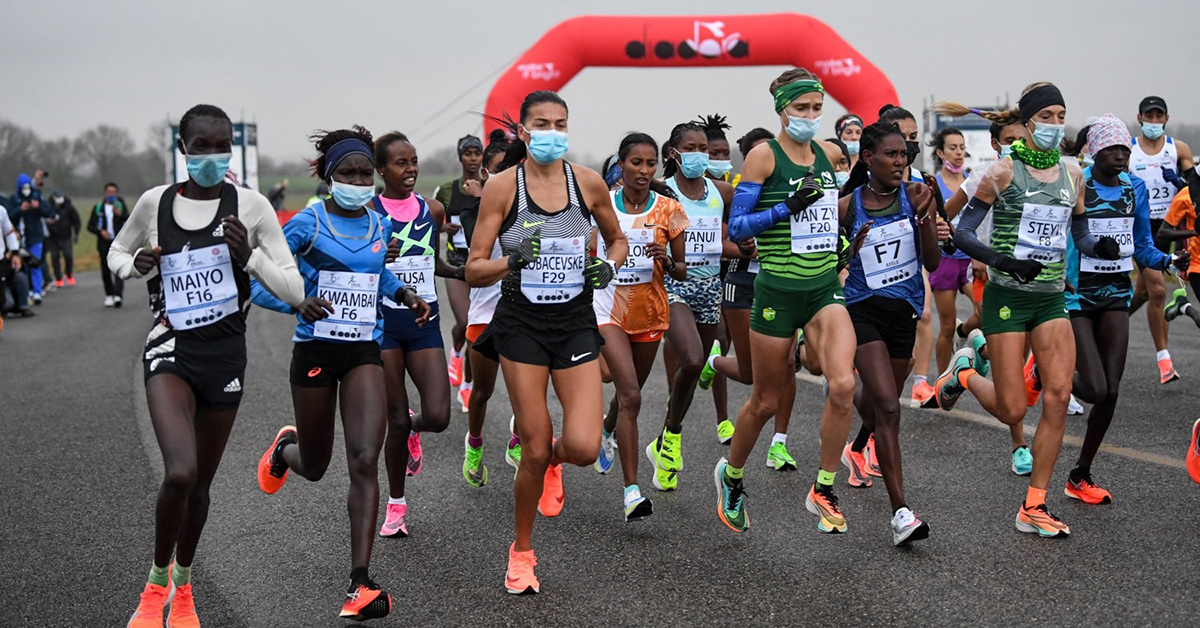 Conditions may have not been the greatest in the Xiamen Sienna Tuscany Elite Marathon that took place in Sienna, Italy, however phenomenal tenacity and runs were shown by Nedbank running club athletes, Gerda Steyn and Irvette van Zyl, with Gerda breaking the National record and Irvette running a PB!

In the women’s race, teammates Gerda Steyn and Irvette Van Zyl, both coached by Nedbank running club national team manager Nick Bester, arrived in Italy with a clear goal. Although not stated before, Gerda was eyeing Colleen de Reuck’s national marathon record of 2:26:35 after narrowly missing out on it last year in London whilst Irevette was looking to run a new personal best and dip under the automatic Olympic Marathon qualifying time of 2:29:30. Both runners did not disappoint.

Running virtually on their own the entire race, Steyn set out at a high 2:25 projected finish time with Van Zyl maintaining a projected finish of 2:27. As the lapped course went on, it was clear that both were witnessing something special as they started to pick off runners ahead of them who were starting to struggle.

With 5km to go, it was clear that both were on track, as Gerda powered through to the finish to not only record a new personal best but smash the national record to finish in a time of 2:25:28. Irevette bravely held on behind her to finish in 2:28:40, also smashing her previous best and booking an automatic Olympic qualifying time to boot.

“We ran and we fought, and we did it,” said an elated Gerda after the race. “I am super happy with my time of 2:25:28 after narrowly missing out last year on the record. There is so much to say about the experience but for now, I want to celebrate PBS’s with Irvette!”

An elated Irvette also expressed gratitude and thanks for her race. “It’s all smiles for myself and Gerda after today’s run and I could not be prouder today of being a South African,” said Irvette. “After being so close to quitting the sport after the 2016 Rio Olympics as well as recent operations I don’t have words to describe right now but there are so many people I am thankful for who made this all possible.” 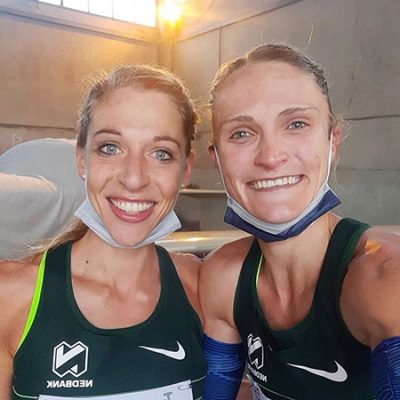 In the men’s race the Nedbank running club had three athletes taking part which consisted of Namibian Tomas Reinhold and Zimbabwean’s Ngodzinashe Ncube and Isaac Mpofu. Starting off in the Olympic hopeful’s bunch that set off at a projected 2:11 finish which was under the automatic 2:11:30 time needed, all three looked great up until 30km when the race really began as many an elite runner would say.

“The goal coming into this race was simple,” said Bester. “Gerda was going for the SA record and Irvette to qualify for the Olympics and they did exactly that, so I am very happy!” Taking into consideration the conditions, Bester feels that they are even capable of a lot more. “Look the conditions and the fact that they ran entirely on their own does not show the true time on the clock. I am certain that in better favorable conditions and more athletes around them, they would have run even faster but at the end of the day they executed exactly what was planned, and I am extremely happy with their performance. Now they will have some hard-earned rest and then the training starts again as we look towards the Olympic Games.”

See below for an interview with Vaylin Kirtly on Morning Live!