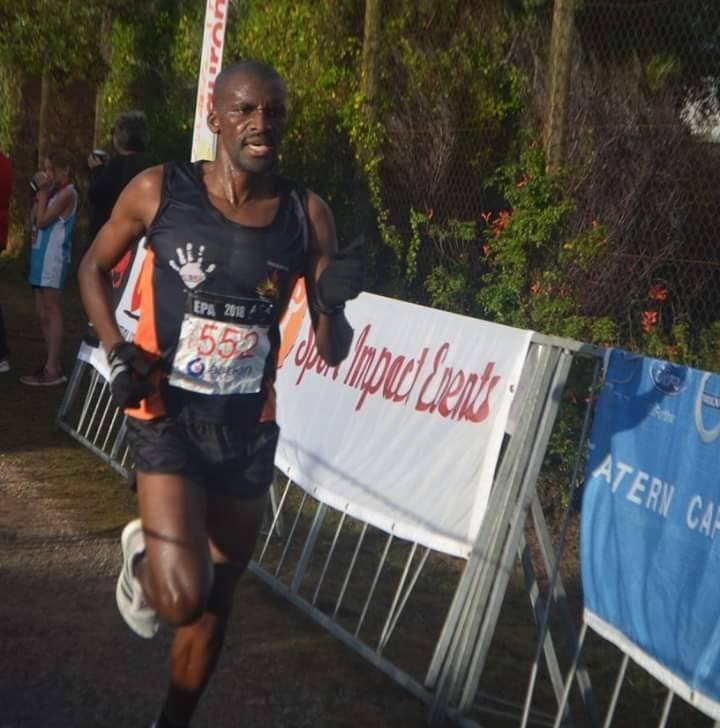 Marathoner Melikhaya Frans is going to stick to Britain’s Sir Mo Farah like a bad rash on Sunday in his quest to earn himself a ticket to the Olympics. – BY Matshelane Mamabolo

The 30-year-old Frans is one of three South Africans who will be participating in the elites-only London Marathon on Sunday 4 October, and plan is to run under 2:11:30 to put himself in line to be among those picked to represent the country at the Games in Tokyo, Japan next year. Gerda Steyn and Elroy Gelant are the other two runners from our shores who will be running the 42.2km race on the looped course of 19.6 laps of St James’s Park in central London.

Chasing Olympic Qualification
Farah will not be competing in his home marathon, which has been billed as a showdown between Kenyan marathon world record holder Eliud Kipchoge and Ethiopian Kenenisa Bekele, owner of the second-fastest time in history. Instead, Farah will perform pacing duties for the British athletes who are chasing Olympic qualification – and Frans intends making the most of this illustrious pacing service.

“My strategy for the race is to go with the group of British guys who will be running for a sub-2:11,” Frans said before his departure to London “It’s a dream of mine to go to the Olympics. From when I met with my coach, Michael Mbabane, in 2016, we agreed on a Vision 2020 plan.”

That plan saw the Ikhamva Athletics Club runner work his way up to become one of the top marathon runners in the country, with a personal best time of 2:14. However, he failed to realise his Olympic dream last year, ranking sixth overall in the country after things didn’t go to plan at the SA Championships during the Cape Town Marathon.

“In Cape Town, the problem was that the pace-maker was not honest. He raced, and that messed up our plans,” coach Mbabane reflected on Frans’s 11th place finish. Fortunately, the postponement of the Olympics due to the COVID-19 pandemic has provided the man from Port Elizabeth with a second bite at the cherry, and he intends to sink his teeth firmly into it.

“Corona was a blessing in disguise for me,” said Frans, who made his marathon debut in Cape Town three years ago. “London is one of the biggest marathons in the world, and now that I’ll be running against the guys who have the two fastest marathon times in history, I have a chance to qualify for Tokyo.”

First International Marathon
It will be his first marathon outside South Africa, but Frans is not perturbed, and his coach – who will be watching his charge on television – is confident Frans will deliver. “He’s ready to run a good marathon, even though it is his first time out there. He has previously run a half marathon overseas and that will help him. He knows exactly what he has got to do. It’s an open secret that Farah is planning to take the Brits to the halfway mark in 65:13, and that will be easy for Melikhaya to do, because his 21km PB is 61 minutes.”

The plan, the coach explained, is for Frans to stick with the Brits at least until the 32/33km mark, from whence he will probably put foot to the peddle to realise his goal. “There’s essentially only one space in the South African Olympic team to fight for, and we would like for him to get it,” Mbabane said.

Stephen Mokoka’s place is secured following his fifth-place finish at the World Championships in Doha last year, while South African Champion Gelant – who is gunning for a sub 2:07 – is also assured of his selection. Desmond Mokgobu is another one who should be in the squad after his brilliant run in winning the Beppu-Oita Marathon in Japan, and Frans faces stiff competition from Sibusiso Nzima for what could well be the stand-by spot in the team.

“We believe that a 2:10 will give him a chance to get into the team, and even if it does not, it is the kind of time that will open great doors for him. We also want him to run the Eastern Province record,” said Mbabane, adding that Frans had a great training camp where he ran loops of 45km, and thus should not have problems with the race structure.

Support From Fellow Athletes
His coach is also pleased that Gelant is doing the race: “Elroy is Melikhaya’s mentor, and he called us last Saturday to check on him. They will be together in London. We were also happy to receive a call from Stephen Mokoka, who had some words of encouragement for the young man.”

Of course, Frans said his confidence was boosted by that call: “This is exciting for me, a massive opportunity. I am ready.” But is the world ready for what Frans believes will transpire in the ‘main race?’ “I think they are going to break the world record. And in my mind, Bekele will beat Kipchoge. I saw him when he ran Berlin, and I could tell he has it in him.” (Last year, the Ethiopian only narrowly failed to break his Kenyan adversary’s record of 2:01:39 by just two seconds!)