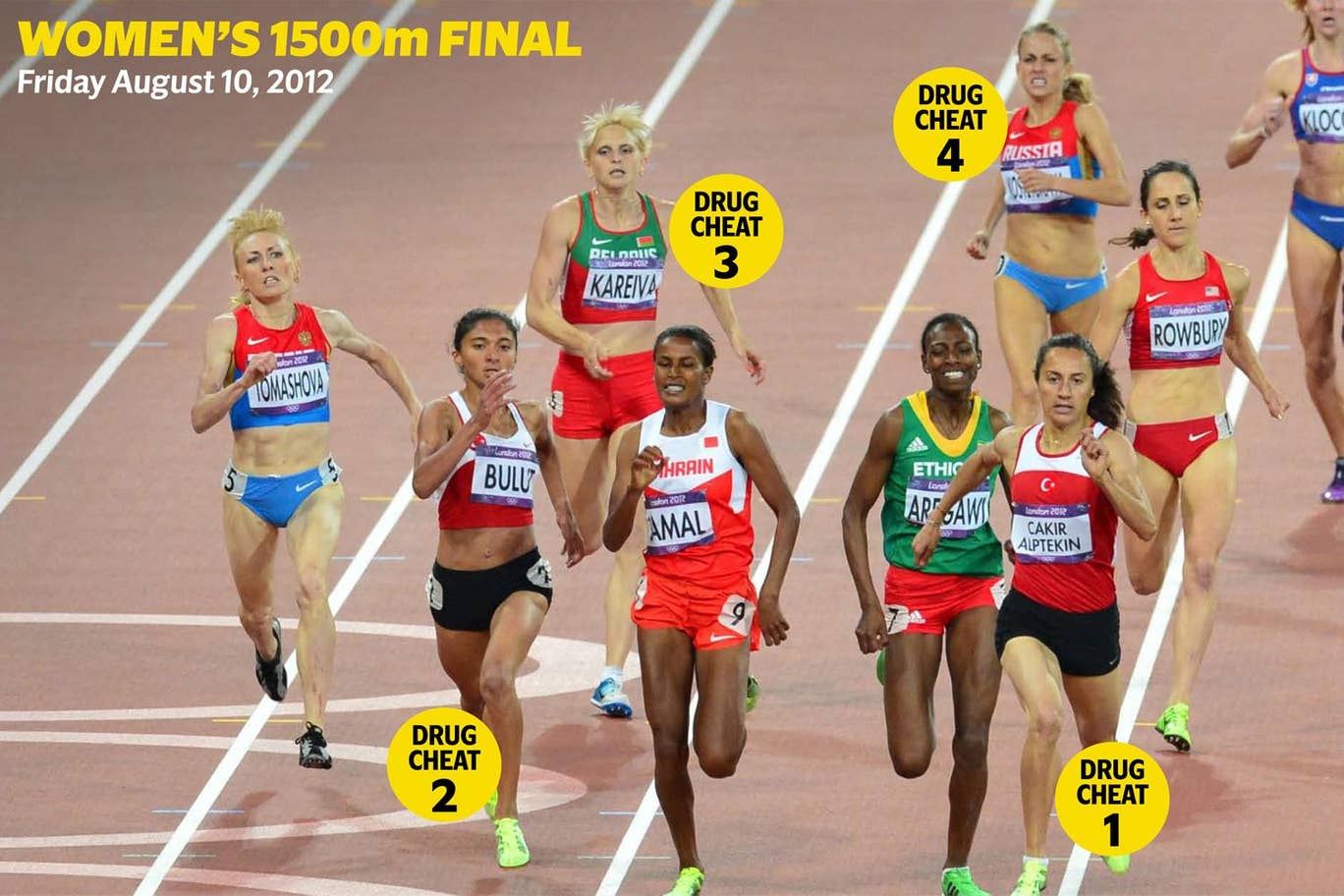 How often have we said, “Wow, what an unbelievable performance!” after an athlete puts in a jaw-dropping performance? The problem is, can we trust that performance? Unfortunately, history points to the need for healthy scepticism, and it is the role of the media to ask these questions.

In 2009, Usain Bolt streaked away from the opposition in both the 100m and 200m to set world records that look unlikely to be broken in many a year, if one looks at the current crop of sprinters. In the marathon, Eliud Kipchoge has set the bar so high with his win in the Berlin Marathon in 2018, that he is being called a freak of nature. Meanwhile, Paula Radcliffe has owned the women’s world record in the marathon since 2003 – only Mary Keitany and Ruth Chepngetich have even come within two minutes of her time, and only as recently as 2017 and 2019 respectively.

Looking outside of running, Lance Armstrong won seven Tour De France titles on the trot, repeatedly destroying the other riders going up the infamous Alp du Huez climb. Who can forget the day he looked into the eyes of his then biggest rival, Jan Ulrich, and dropped the German as if he was a child just learning to ride a bike. And in swimming, we saw Michael Phelps win 28 gold medals in four Olympic Games, eight of which came in 2008.

At the time, all of these feats, and many others, left us awestruck, and many still do… even the tainted results of Lance. They stand out because they are so far ahead of the rest. But it begs the question: Are these athletes just freaks of nature, and should we simply accept that these (and others) are legitimate performances? No, absolutely not, because the media’s responsibility is to ask the hard questions, however unpopular they may be.

Whilst Armstrong was completely dominating the Tour, few questioned his performances. Many thought he had too much to lose by doping, especially considering his foundation, and his credibility surrounding his fight against cancer. Yet, if it wasn’t for the tenacity of journalist David Walsh, Lance may have gotten away with the greatest con in sporting history. David was even ostracised by his fellow journo’s, as they feared that just being associated with him could lead to them being denied access to the greatest cyclist the world had ever seen. But it was David’s bulldogged attitude that saw to the fall of Lance.

My point? Quite simply that every outrageous or far-out performance should be queried. For example, at the moment the 2019 performances of Namibian Helalia Johannes, the 2018 Commonwealth Games marathon champion, are being questioned in many circles. In 2019, at the age of 39, she has unexpectedly improved her marathon PB by nearly four minutes in Japan, set a new half marathon PB in the Two Oceans Half, and recorded three 10km PBs on the way to winning five out of five Spar Women’s Challenge races. This has also seen her set five new Namibian national records, from 10km to the marathon. Some have questioned her performances, and have suffered a barrage of abuse for raising those questions.

It is the very nature of these outlying performances, though, that is raising the questions. And there is a very simple way to answer those questions, whether we are talking about Helalia, Paula, Eluid or any other athlete: Vigorous drug testing, and complete openness about the process. For example, Two Oceans and Comrades champ Gerda Steyn, as well as other athletes, are very open about when the anti-doping officials come knocking on their doors. They take to social media to say something to the effect of, “Wada woke me up at 6am this morning to test me, all in the name of clean sport.” This welcoming of the testers and putting it out there goes a long way to boosting your reputation as an athlete.

Usain Bolt’s performances were beyond parallel, and his charisma brought back some much-needed excitement and panache to the sport. However, take a glance at the 10 best athletes behind him in the 100m, who like him have all clocked 9.80 seconds or faster, and you’ll see they have all either tested positive for performance enhancing drugs (PEDs), or at the very least have been associated with PEDs during their careers.

Then there is this comment by former Olympic champion sprinter Carl Lewis: “When people ask me about Bolt, I say he could be the greatest athlete of all time… but for someone to run 10.03 one year and 9.69 the next, if you don’t question that in a sport that has the reputation it has right now, you’re a fool. Period.” Now you can take comments made by Carl Lewis with a pinch of salt, because there is just as much speculation around his own performances that he is probably not the person you would want to quote in this regard, but the point is well made. Bolt did improve from a 10.03 to a 9.69 within a year. That is a monumental leap!

There have been no public links to PEDs with Bolt, but the question has been asked many times: How can someone who is not in any way associated with doping beat every single athlete who has been doping at one time or another, and that by the proverbial country mile? The exact same question was asked of Lance Armstrong many times, given that most of the riders he was consistently beating had been caught for doping at one time or another.

Similarly, there are many who question Eliud’s record, including highly respected sports scientists and sport journalists. He has run 12 marathons, winning 11 of them and setting the World Record in Berlin in 2018, and the only time he was beaten, it took a World Record performance to defeat him. He also came very close to breaking two hours for the marathon distance in 2017, clocking 2:00:25 in the Nike Sub-2 Project, and will be attempting to do so again in October. If Eliud breaks two hours, and I do believe he can, then people will be asking still more questions.

Now for a very important disclaimer: I am in no way, shape, fashion or form saying that any of the above-mentioned athletes are guilty of using PEDs. Let’s be very clear about that. They are all innocent until proven guilty! However, the saying that where there is smoke, there is fire, also applies here.

When Lance literally came back from his deathbed to go on to win seven consecutive Tour titles, the world was agog. He raked in sponsorships worth hundreds of millions of Dollars, he was feted all over the world, and became an icon and inspiration to people the world over. And then the bubble burst, primarily due to the tenaciousness of David Walsh. Had the British Journalist not stuck to his guns and faced down lawsuit after lawsuit, the Lance Armstrong myth would have lived on.

More recently, the 2012 London Olympics have been exposed as the dirtiest Games ever, after loudly proclaiming that they were the cleanest. Athens in 2004 had 41 positives, Beijing in 2008 had 86, whereas London returned a total of just nine positives within the first three months after the curtain had come down. However, after retesting of stored samples of athletes who won medals in 2012, that figure has now rocketed to 87 in track and field alone, and a total of 132 throughout the different sporting codes. As a result, the women’s 1500m has been dubbed the dirtiest race in history, as six of the top nine finishers have now been associated with doping, either in that event, or during their careers.

This is why every anomaly or standout performance has to be questioned, because unfortunately, nothing can just be taken at face value anymore. Sadly, that means we are going to have to accept that some athletes we supported, admired, even adored, may someday be exposed as cheats. (The current anti-doping laws allow for samples to be kept in storage up to eight years, and to be repeatedly tested as science evolves. From 2020, this law will be extended to a 10-year period.)

However, we need to be clear about this: Superhuman feats do not automatically equate to cheating and the use of PEDS. There are genuine athletic ‘freaks’ out there, who will continue to leave us awestruck with their performances. Let’s celebrate them, but let’s not be blind to the fact that all is not always as it seems, and thus let’s be sure to ask the right questions.

Manfred Seidler is a freelance Olympic sport journalist who has been in the industry since 1994, in both print media and broadcasting, covering four Olympic Games for SAC radio, and producing various athletics shows for the SABC. Follow him on Twitter: @sportmansa; Facebook: Sport Man SA; Instagram: sportman_sa