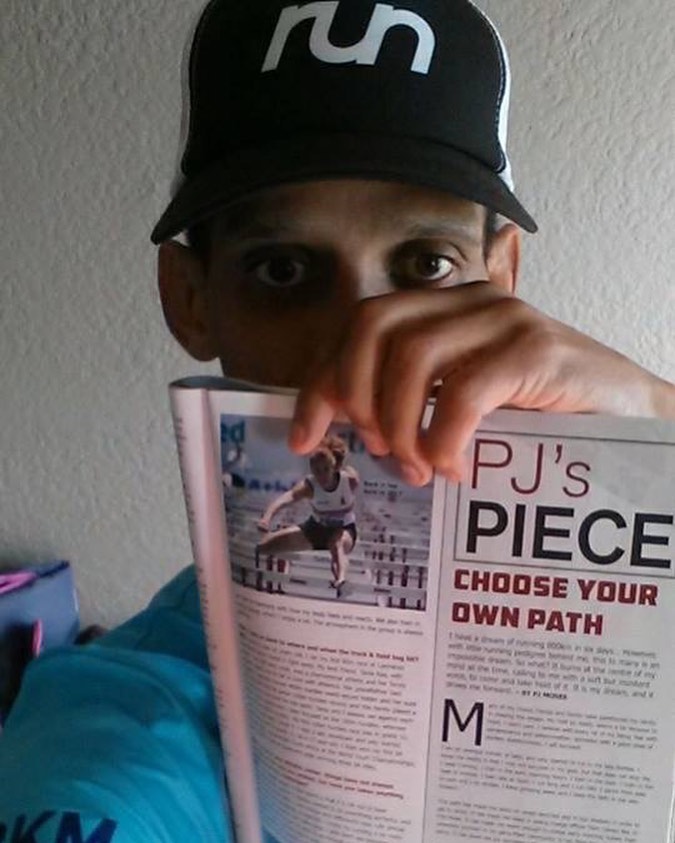 Running is easy for PJ Moses, talking not so much. He’s had trouble speaking since he was four years old, and stuttering has been a tough thing for someone like him, who often has a lot to say…

When I was young and I found it difficult to communicate, I would resort to violence, and the harder it became to speak the easier it became to be violent. I wasn’t an angry child, but I was quick to anger. I feared speaking in public because of the ridicule that would always accompany it. The fear, the anger and the frustration all led me down the wrong path to a dark world. My choices were poor, and in the end I found myself part of a world with very little hope of getting out the other side.

But being alive is hope in and of itself, and every day that I was still around meant that I had the opportunity to try and change the course my ship was heading on. I wrote because I loved it, and I ran because it kept me sane. This combination gave me the power to break free of my past and fight, in the right way, for a better future.

Through writing on social media, I could finally let my ‘voice’ be heard. I chose to become the voice for those who didn’t have one, the voice in the darkness that can help lead someone who needs help and guidance to the light. Soon, people caught wind of my story. They were amazed by the part running played in it, and now they wanted me to tell my story. I was asked to do motivational talks, but my reply was that I couldn’t speak properly, and therefore I couldn’t do it.

It was the fear talking and holding me back, the same fear that made me get lost in the dark all those years ago. It was now back, to trip me up and drag me down to the depths again. I once referred to the frustration of stuttering as a feeling of being stuck in a cave and shouting for help, but the sound just keeps echoing back to you and nobody else can hear it. And this feeling of helpless frustration is what I wanted to avoid at all costs. However, through the belief of my circle of friends, and the desire to share my journey as a motivation for others out there, I decided to give this talking thing a go.

I started with a talk to 10 people, then a larger group followed, and then a video clip followed that. Soon schools started asking me to come and talk to their learners, and even though I still had the fear, I now also had the courage that came with taking on races that nobody who knew the old me would have thought that I could do. Running ultra distances on tar and on the trails, standing on the peaks of the most majestic mountains, and claiming the odd podium place here and there, has made me more courageous. It made me the brave man I always thought I could be.

Then somebody said they wanted me to do a live radio interview. I almost choked on my GU, because the fear was immediately back. How could I do something like that? The people listening would laugh at me and complain to the radio station. I would be a laughing stock. But what if I could inspire just one person? What if sharing my truth helped somebody else to change their narrative? Was it not worth the effort just for that slim chance? Of course it was, and I had come so far that I couldn’t stop now – I had to take the chance, no matter the fear.

The interview was hard. I was sweating like a pig, with a mouth as dry as the Khalahari, but I pushed through, because I focused on just telling my story and sharing my experiences. The host was fantastic and the whole experience was a beautiful one… I felt like Caeser after he crossed the Rubicon! There was no going back now, and every step from here will be a victory. So my message to you is that you should never let fear hold you back. Share your truth, because there is always somebody out there who needs to hear it.

PJ is a former Cape Flats gangster who took up running, and writing about it, when he turned his back on that dangerous lifestyle in order to set a better example for his two sons. Today he is an accomplished runner, from short distances to ultra-marathons, recently began working in running retail, and his exceptional writing talent has opened still more doors in his new life.