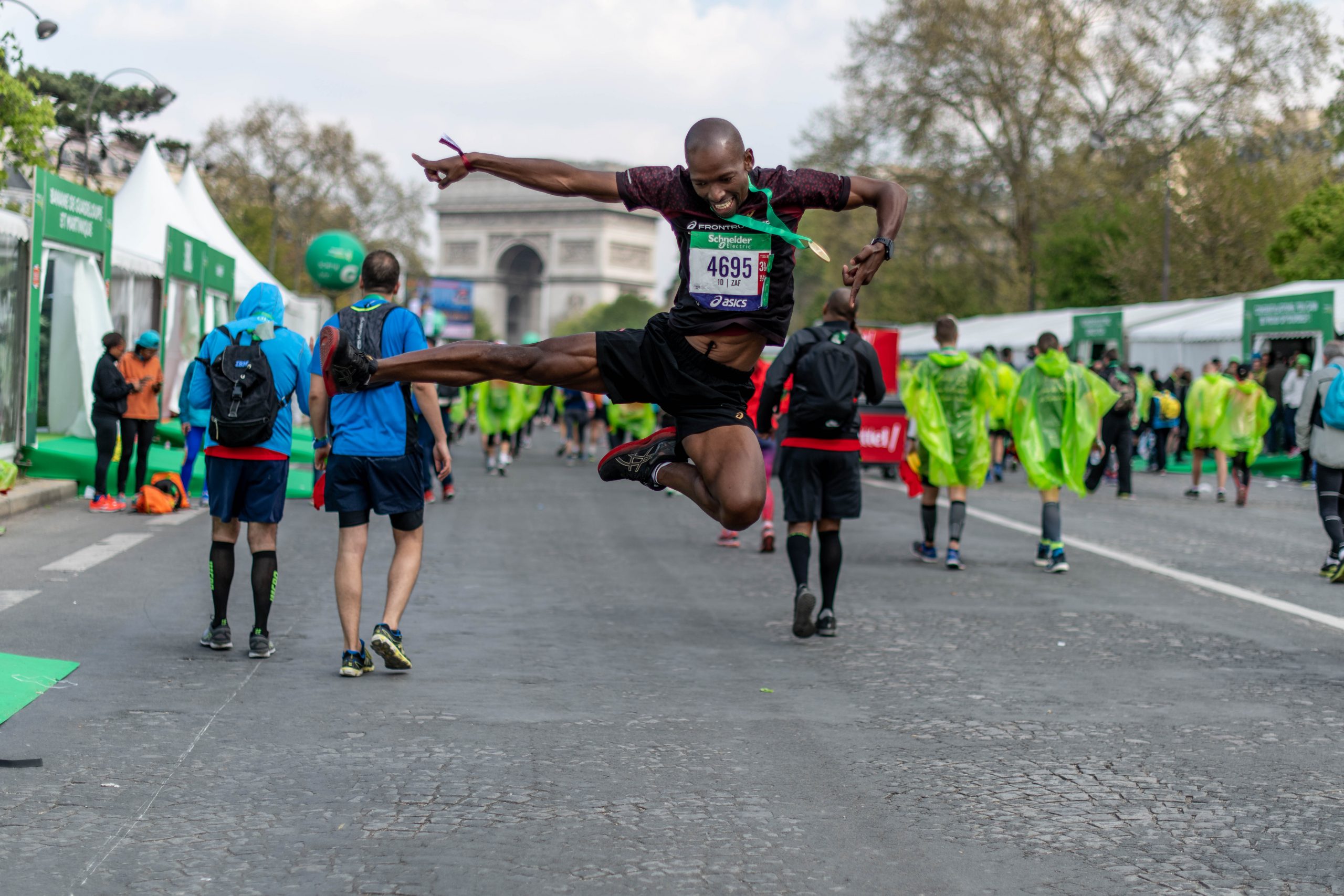 Had you asked a younger Wandisile Nongodlwana if he could see himself someday travelling the world for work and running, while inspiring people to follow a healthy lifestyle and develop the self-belief to get out and go for a run, he would probably have stared at you blankly. Yet in spite of his incredibly humble background, this inspirational athlete is the reason many people have started running. This is the story of his journey from the rural areas of the Eastern Cape to the farthest corners of the globe.

If you are an ardent follower of running on social media, you may have seen Wandisile Nongodlwana’s trademark jump as he crosses the finish line of his latest event or adventure. You may also have seen recently that the 43-year-old Wandi, as he is known to many, was part of an international team of runners that took on the London to Paris Challenge organised by Asics in April this year. 10 runners from all over the world, all part of the global Asics FrontRunners programme, were selected to run from London to Paris and then finish the journey with the Paris Marathon. “We had to send a motivational letter to Asics on why we should be doing this, and I got in. The goal was to test various shoes for Asics. We ran in their new Metaride and had to give feedback, and it was quite an experience,” says Wandi.

While the challenge was supposed to be a marathon distance every day for 10 days, including the Paris Marathon, it turned out differently, with one day even being 75km long. “We had to deal with blisters, and people had shin splints. We had to carry our food with us during the day, as only breakfast and dinner was catered for. So the first day was a marathon, day two was over 50km, and day three became 75km. We were not all at the same fitness level, and ran at different speeds, so that did cause some friction, which was made even more difficult by the language barriers. We had a massive blow out in the group on day three, but that seemed to be needed, as from then on there seemed to be a better understanding and tolerance level. It was very interesting to see how people reacted to different stress levels and situations.”

Unsurprisingly, the trip left Wandi with many memories and indelible impressions. Perhaps the most profound came on the morning of day four, as the group ran along the famous white cliffs of Dover in the UK, before departing Newhaven on the ferry to cross the English Channel to France. “That was really special. And high!” he exclaims. “I lay down on my tummy, crawled to the edge and looked down. I was literally looking down on the seagulls flying around the cliffs. But lying there was also a spiritual experience for me. It was so peaceful. I lay there looking down for about five minutes. Initially the adrenaline was pumping, but then I calmed down and felt this amazing sense of peace and awe. It seemed that all the troubles in the world had become insignificant. I was that much at peace.”

This jet-setting life as an international runner and brand ambassador is a far cry from Wandisile’s humble start to life. He was born on 24 December 1975, in the remote village of Soto Location in Mooiplaas, some 40km outside of East London, the eldest of five siblings. Life was challenging for Wandi and his family: Water had to be fetched from the river in buckets, there was no electricity, the family slept in one hut, and afternoons and weekends were spent herding the cows and goats. His mother had no education, and his father had left school in Standard 2. Life was a battle… so for Wandi, the escape was education. He learnt from a very early age that he needed to excel at school if he wanted to leave the rural and humble surroundings he was growing up in.

Wandi is a talented runner, but not in the realms of those select few who could earn a living from it – only a tiny number of South Africans fall into this category – and his running started much later in life, anyway. At school his first love was soccer. “I was a number nine, a striker,” says Wandi with that infectious laugh of his. When asked who his idol and inspiration was amongst the world’s top players, he replies that he didn’t have any specific heroes that he followed. “We did not have TV when we grew up. It just happened that way.”

Once Wandi hit Standard 8, he moved in with his uncle in Duncan Village, a township in East London. As with primary school and his junior high school years, Wandi threw himself into his studies in East London, and when he matriculated, he was awarded a full bursary from Liberty Life to go study Computer Science and Applied Mathematics at Wits in 1994. The hard work was beginning to pay off!

That bursary literally changed Wandi’s life, but it was a big move for the 18-year-old. “I literally only had 50 bucks, which my grandmother gave me. I also had the clothes on my back and a tog bag full of other clothing and toiletries. That was it.” As he says that, he holds up a regular sports tog bag to demonstrate how little it actually was. “Fortunately, the bursary covered everything, all my tuition and my accommodation. I went into a fully-catered res, so all meals were catered for. All my books, stationery, everything.”

The bursary also changed the fortunes of Wandi’s family, as it effectively made him the ‘bread-winner’ in the family. The small amount of pocket money he got from the bursary funds was supplemented by tutoring on weekends and in school holidays, and all that money went back home to help the family. After Wandi finished his studies and started to work, the money continued going to the family. “My first job, my first salary cheque went straight to my younger brother, who was in his first year at PE Tech.” That trend continued with his other siblings, too, and he then brought one sibling after another up to Johannesburg, paid for their tuition and also rebuilt the family home in Soto Location. His parents have passed on, so he is now the head of the household.

Today Wandi works for De Beers in IT, as a system manager, a position that sees him travel frequently to places as far-flung as Canada. His travel schedule for work, on top of frequent travels for running, means that he needs to spend as much quality time as he can with his wife and two children. “It isn’t always easy, but I make sure that the time I spend with them is the best time ever.” Wandi is a very private person and keeps his family life away from the exposure of social media, even though he is very active on social media as part of his running. “That is my life and is separate from my running, and the columns I do for Asics as an Asics Front Runner. That will always be sacred to me, and I will not expose them to that side of my life.”

Wandi’s introduction to running came some years back when he was part of a business relay event for work. “My leg was 7km long and the guy I handed over to was to run 11km, but at the changeover, he wasn’t there. You know, at these changeovers, there is always a big crowd and the person you hand over to is not always right there, so you sometimes have to look for them. But this guy wasn’t there, so I ran through the changeover point, thinking that maybe he would be further down the road. He wasn’t, so I just ran the next leg. I ran 18km that day, and I was like ‘Hmmmm, I can do this running thing.’ And that is how the running bug bit.”

“I then met a guy in the gym who would get there in the morning for training, but he was already sweating. He told me he was training for Comrades and ran in the mornings before doing his gym. It was quite funny… I knew nothing about having to qualify for Comrades. I knew absolutely nothing about running, I just knew I had to do Comrades.” And with that Wandi began training for and ran his first Comrades in 2008, finishing in 9:55:59. Having now run the race 12 consecutive times, he has posted a best of 6:39:45 in 2018 and has seven silver medals to his credit, including six in the last six years.

These days Wandi races in the veteran category and occasionally finds himself on the podium, which he says has reignited his passion for racing, but adds that his focus has changed from always trying to improve his times and chasing medals and podiums, to rather trying to inspire others to run. “In the past three, maybe four years, my focus has changed. It is now more about inspiring people. I want to show people that you can do well, whatever ‘well’ means to each individual. I won the Golden Gate stage trail race a few years ago with no sponsor. It was literally through dedication and hard work, so that is the message I am now trying to send.”

The biggest impact on his running career has been in the last three years, thanks to his successful application to become an Asics Frontrunner. In 2016 Asics advertised on social media that they were looking for brand ambassadors, or as they call it, FrontRunners, and Wandi’s friend Charmaine Mohokare encouraged him to apply. “She told me I had nothing to lose, so I applied and I became part of the crew in 2017. Through being a FrontRunner, I have had so many opportunities and experiences to run races, so it has been really good for me. But being an Asics FrontRunner does come with responsibilities, and I still want people to just be inspired to be their best. After all, I became a Frontrunner because of trying to motivate people.”

By far the biggest opportunity that has come Wandi’s way through his association with Asics is the London to Paris Run, which he describes as a life changing experience. “I learned so much. We had runners from Russia, Portugal, the UK, Germany, and more, 10 runners from 10 different countries, and of course very few spoke decent English, which made communication very difficult. There were also different cultures, different outlooks on life, which made it a very interesting trip. For starters, not all of us ran at the same level, so we had to figure out how each person would run, and subsequently ended up in broadly two groups. Obviously there were also interpersonal dynamics.”

Having gotten through the longer than expected first few days and overcome the initial problems of communication and approach within the group, the 10 Frontrunners duly made it to Paris and lined up for the marathon, which they all ran and finished together. Wandi says the sense of achievement they felt as a group was immense, of having conquered a huge challenge, but even more gratifying was the newfound friendships, and all that they learnt along the way.

“That journey was one of deep introspection for me. I learnt so much, grew as a person, and discovered things about myself of a deeply personal nature, which show me that your background does not limit you. Work hard, look for opportunities and when these are presented to you, embrace them with open arms,” says Wandi. “I am deeply grateful for the opportunity provided to me by Asics, and I am looking forward to new adventures.”