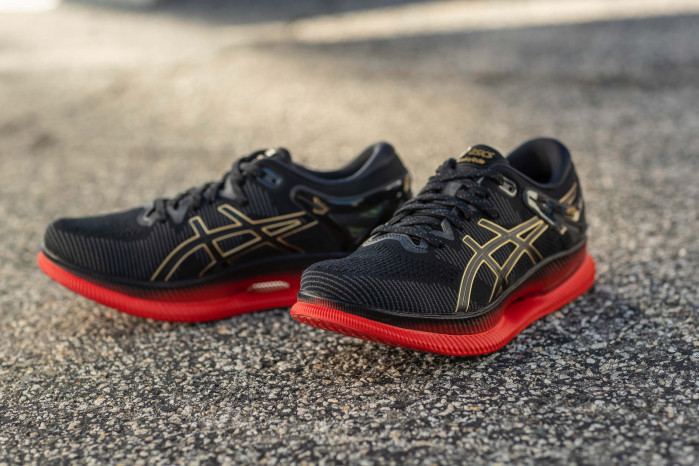 It’s not often I liken a running shoe to a rocking chair, but that’s such a great way to explain the new Asics MetaRide, which is designed to help you run longer by helping you save energy. – BY SEAN FALCONER

I’ve said this before, and I will likely say it many times yet in my career as a running journo, but when a shoe brand sends me a new model to review accompanied by a media release that starts with something along the lines of “Brand X is redefining running,” I tend to be a bit sceptical. That’s because I’ve been receiving releases like that for nearly 20 years now… and no doubt will continue to receive them until I retire.

That said, I was rather intrigued by the latest arrival from Asics, which read, “Asics today turned the world of running on its head as it revealed a completely new concept in run efficiency, Metaride. One of Asics’ most important innovations in seven decades, and as part of Asics’ ambition to help all runners to win the long run, the shoe was designed with one purpose in mind, to make running longer distances easier.”

My first thought was, I hope this new shoe lives up to the claims of the media release, because I’ve heard this kind of thing before… but when I looked inside the shoe box, I could immediately see what the people at Asics mean. The new Metaride model is certainly eye-catching – and I’m not just talking about the black, red and gold colourway, although I would like to mention here that these shoes hit the spot with me in terms of looks! No, it was the clearly rounded, built up outer sole that immediately caught my eye, and I knew I was indeed looking at something different here.

Saving Energy
Asics says this new technology has been two years in the making at its Institute of Sport Science in Japan, and they believe they have found a way to minimise ankle movement and thus save you 19% of energy expenditure when running. For those not so good with the maths, that’s one-fifth of your energy expenditure, which would really make a difference when running longer distances, as we are rather fond of doing here in South Africa.

It boils down to the science behind shifting your body weight forward, from landing to toe-off, and that’s where the curved GuideSole comes into play. Basically, it’s designed to rock you up onto your forefoot easier and quicker, using less energy to do so. Think of a rocking chair, with its curved rockers. This shoe mimics that… although the Japanese designers say it was actually inspired by a rolling wheel, but i prefer my rocking chair analogy.

The shoe’s midsole is built out of three layers to create this ‘rocker’ sole. The one level of midsole rubber is FlyteFoam Lyte, for cushioning and structure, while the other layer is made from FlyteFoam Propel, which gives you extra rebound in the toe-off phase. This combination has already featured in other recent Asics models, such as the Kayano and Cumulus. Thirdly, there is a visible Rearfoot Gel insert to add extra cushioning when your foot strikes the ground. That gives the shoe the traditional squishy landing that so many runners love about Asics models.

Stacked Midsole
The midsole has a 30mm stack height, and a zero drop from heel to toe. Whereas most running shoes have a higher stack in the heel and drop a few millimetres down to the forefoot, this shoe does not drop. Instead, it has a prominent upward curve in the forefoot that simulates a drop as you pivot forwards, but without putting you in an unnatural toes-down position in the first place.

The midsole feels most substantial behind the ball of your foot – you notice it when you first put them on, but you soon get used to it. The whole point here is to place your centre of gravity towards the back of the shoe, thus helping your foot swing through each stride quickly and easily. This is because instead of pushing you on to the forefoot instantly, as most running shoes try to do, this design makes you sit on your haunches a split second longer, then slingshots you forwards instead of dropping you forwards. That’s about the best way to describe the concept.

The shoe is thus rather firm – much more so than normal running shoes – and you will not be able to bend it with your hands, as you often see runners doing when looking at a new shoe. This goes against many of the design trends of recent years, with most shoes featuring more or deeper flex grooves in the forefoot to increase flexibility and allow a more natural toe-off, with the foot given freedom to flex more. In contrast, this shoe provides a more rigid rocker motion to help rock you forwards, instead of making your muscles do all of that work alone.

Putting it to the Test
I took the MetaRide for a few runs at different paces, both slow and fast, and I definitely noticed the rocker kicking in as I transitioned forwards on to my toes. I rather enjoyed the ‘helping hand’ I was getting, but I did find that the rigidity of the shoes took some getting used to, given that most of the other models I have run in for the past few years have tended to have super-flexing forefeet. As a result, when I tried to go faster in the shoes, in a time trial type of run, then I really noticed – and appreciated – the rocker motion, and to be honest, I preferred them at speed versus the long, slow stuff, purely because I am used to super-flexing lightweight models. That’s a personal preference, not an indication of the merits of this shoe.

I am therefore of the opinion that you need to put some serious mileage in with these shoes to really feel the effect of the energy-saving rocker motion, when your feet and leg muscles are tired. As I am not running those kinds of distances at the moment, I cannot tell you if the shoe delivers on that promise, but the good folks at Asics report that their wear-testers have indeed reported this to be the case.

These shoes are admittedly pricey at R3500 a pair, but if they can save you 20% of your energy expenditure over the long run, I’d say they’re worth the investment. I mean, just imagine getting to the last third of Comrades or Two Oceans, and having 20% more energy than usual. Now that would be something!

GET IT HERE: The new Asics MetaRide sells at a recommended retail price of R3500, and is available in limited quantities from ASICS retail and online stores and specialist run outlets from 28th February. Stockists: ASICS Canal Walk & Mall of Africa, Sportsmans Warehouse, The Athletes Foot, RUN, Run-Away-Sport, The Sweat Shop, TotalSports and Brian Bands Sports.