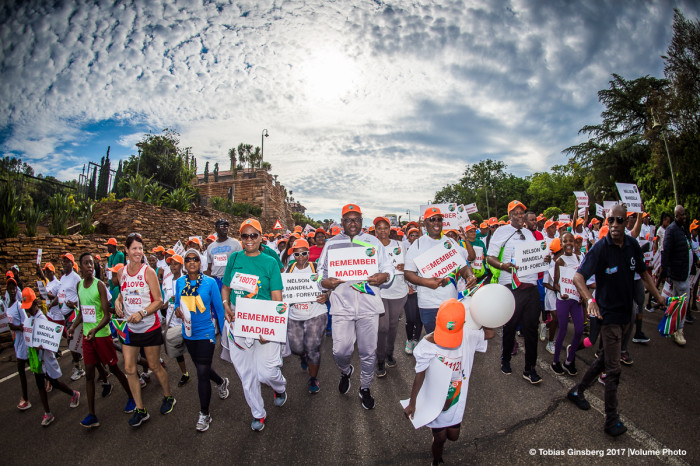 To those who have left it late to register for this year’s Mandela Remembrance Walk and Run in Tshwane this Sunday 9 December, there’s good news in that late registrations will still be accepted at race collection points this week.

Participants can still register for the event on Thursday 6 December at the Nelson Mandela Foundation at 107 Central Avenue, Houghton, and on Friday and Saturday 7 and 8 December at the Union Buildings in Tshwane between 9am and 7pm.

Online entries for the event, which sees the introduction for the first time this year of a 21 kilometre Half Marathon, in addition to the 5 kilometre walk and 10 kilometre run of previous editions, will remain open at www.mandelawalkandrun.com until midmight on Friday 7 December.

Some of South Africa’s top sports personalities have confirmed their participation in this year’s Mandela Remembrance Walk and Run on Sunday, which will be a special family event that will bring to an end Madiba’s Centenary Year celebrations for the year.

Bafana Bafana legends Shaun Bartlett, Doctor Khumalo and Aaron Mokoena are taking part, as is wheelchair tennis sensation Kgothatso Montjane and elite athletes such as 2016 Comrades winner Charne Bosman, who has been joined this week in the race by another former Comrades winner in the popular Ludwick Mamabolo.

They are just some of the exciting big names who will join a throng of thousands of people expected to participate in this very special event which will also honour revered political activists and stalwarts Albertina Sisulu and Margaret Gaso.

“This year’s Mandela Centenary Celebrations have been simply spectacular, reaching a crescendo with the Global Citizen festival this past weekend. The Mandela Remembrance Walk and Run is the perfect ending to a memorable year and is a family event that is open to all. We encourage South Africans to join us on Sunday for what will be a very special occasion at the Union Buildings,” said Nelson Mandela Foundation CEO Sello Hatang.

The 21km has proved to be a popular addition to this year’s event, with over half the entries received thus far signing up for the half marathon route, as the Mandela Remembrance Walk and Run becomes a popular event on the South African road running calendar.

Entry fee is R50 for the 5km walk, R100 for the 10km Run and R150 for the 21km run, which will have nominal winners prize money of R5 000 for the elite runners in each age and gender category taking on the 10kms and  half marathon route. All participants will receive drawstring bags from Lotto containing a Lotto shirt, cap and some more event goodies.

There will be loads of entertainment for the kids and child minders will be available to look after them. There will also be food stalls and fitness displays at the event.

The start times for the 21 km and the 10km race is 7am at the Union Buildings, and the 5 km walk which starts at the Kgosi Mampuru Prison is 9am. There will be a wreath laying ceremony in honour of the former President taking place at 8.15am.

The event’s Parking/Park & Ride Plan is as follows:

For more event details and to register for the event go to www.MandelaWalkAndRun.com.