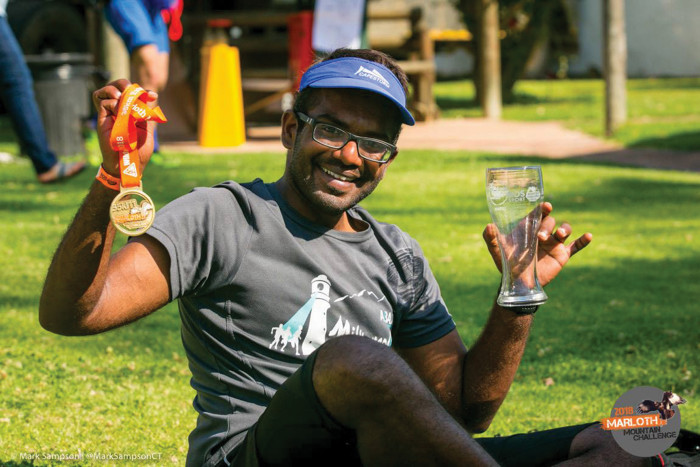 When Srikanth Reddy Karumuri decided to come to South Africa for work and travel, he wasn’t looking to make any major lifestyle changes. The IT specialist from India, who previously worked in London, was just interested in travelling abroad and experiencing a new country and culture. He had no clue that South Africa and its running addiction would change his life. – BY PJ MOSES

Just a few years ago Sri Karumuri weighed in at 115 kilograms and running was the last thing on his mind, but all that has changed. Nowadays you’ll see him running just about everything on the Cape running calendar, and even further afield in SA, including road runs, trail runs, even the odd obstacle race! “I didn’t know much about running until I came here, because India is not known for its long distance running, but I met some runners at work and they got me interested,” says Sri. “I was never a sporty person back home – I didn’t even play cricket – but I was a regular at the gym, because it helped me lose at least some weight.”

Then in April 2016, three years after coming to SA, he entered his first race, the Nantes 10km, on the recommendation of his work friends who ran for Brackenfell Athletic Club. He decided to err on the cautious side, opting to rather enter the 10km walk instead of the run. “I was so new to this world that I did not even know what to do with the race number they gave me, but I immediately fell in love with the vibe. Then, as I was walking along, I saw all these older people running past me with those 60 and 70 age tags. I couldn’t believe it and felt ashamed that I was walking. I decided right there that I would definitely move my lazy bum and run my next race, not walk!”

Bitten by the Running Bug
A few days after that first taste of a race experience, Sri ran the Safari Half Marathon, and with very little training he managed to finish in just over three hours. He says it was tough, but he was completely hooked now, and decided it was time to join his friends at the Brackenfell club. That, in turn, led to still more running adventures. “Everybody was talking about qualifying for the 2017 Two Oceans and Comrades at the Cape Town Marathon, so of course I said that I would do that too, not knowing how hard it would be, and how much training it would take. I started to run almost every day and joined a training group on weekends that was organised by Comrades legend Wietse van der Westhuizen. I also took advice from all the more experienced runners around me, and that made me confident that I could achieve my goal.”

When Sri sets his mind on a goal he does not let up until that goal is achieved, and he proved this by finishing his first Cape Town Marathon in less than five hours, thus also getting his qualifier in the bag. “Running for time is not that important to me, but if it is going to help me get to another race that I want to do, then I will focus and get the job done.”

Since then he has gone from strength to strength, completing the Two Oceans twice and also earning his Back2Back medals at Comrades. “I wasn’t too sure about how my first Comrades would go, even though I did the proper training and mileage. Then Hilton Murray told me that I could join the team of runners who assist the wheelchair athletes Chaeli Mycroft and Anita Engelbrecht during Comrades, and I could help by passing on water and supplements as needed. This made my first Comrades experience so much more special, and also took my mind off my own race while I focused on being part of their special journey.”

Healthier Lifestyle
Naturally, all this running has done wonders for Sri’s health and overall lifestyle, and he says he is actually free to eat whatever he feels like without any guilt. “Running has really helped with keeping the weight off, and it gave me new friends plus a healthier life. At my heaviest I was 115kg just a couple of years ago, but my new healthier and more active lifestyle sees my weight stay stable at around the 70kg mark. I know that whatever I put into my body now will be used up on a long run or in the gym, so if I want a nice breakfast, I run a 10km in the morning, and if I want a big lunch, I run a marathon! Also, now when I have some stress at work, I just put on my running shoes and go for a run. It is the best way to calm myself and put new ideas in my head.”

Sri is a vegetarian by choice, but insists that this does not mean, as many non-vegetarians think, that he can’t eat junk food, because he loves veggie pizzas followed by ice cream for dessert. “People will always complain about how hard it is to lose weight or to exercise, but you just have to put in the effort and you will see the results in time. Nobody can tell you to change, because you will not unless you decide to make those changes that your life needs.”

Chasing the Mileage
Running has become such a big part of who he is that Sri is now a well known member of the 1000km Challenge, which sees runners trying to log 1000km or more in race mileage over a year-long period from Comrades to Comrades. The runner that logs the most mileage wins the challenge overall, and there are also category awards, but for most of those involved it is not about competition against each other, but against themselves, and many run in support of a charitable cause. “I prefer doing what I love in order to assist others, and the added bonus is that the more races I run, the more time I get to spend with my running friends,” says Sri.

Looking ahead, he says he has no plans to cut back on the racing, as he is enjoying it all too much, but he does talk about it a bit less. “My Mom worries that I am running too much and that the distances are too long. She also says I spend too long in the sun, so I don’t tell her any more about the longer distances I run, and only tell her about the short ones. My goal is to run until my body says that I can run no more. I think everybody who runs is a hero, but I do look to those 60- and 70-year-olds who are still running races alongside us young people, and I hope that I can be like them one day.”