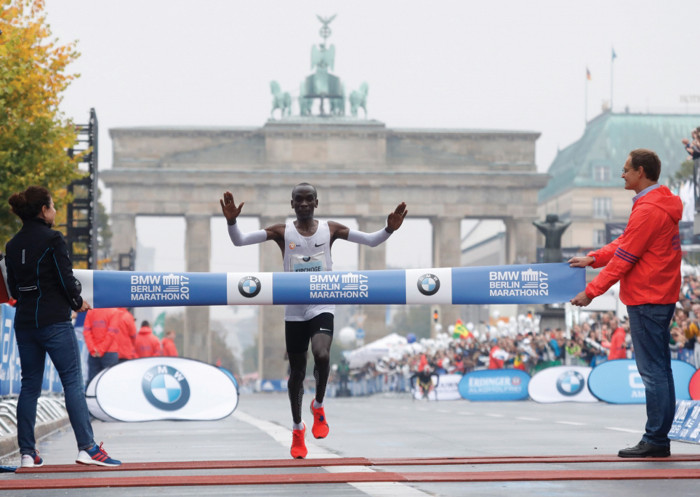 Carl Lewis, Michael Johnson, Usain Bolt and Eluid Kipchoge… four of the world’s greatest athletes, each with an identifying characteristic that makes them stand out from the crowd. Of course, these are not the only athletes that will align with the message of this article, but they are amongst the most successful in their events. – By Norrie Williamson

Lewis, who won nine Olympic and eight World Championship gold medals, was dominant in the 100m, 200m, long jump and 4x100m relay events from 1979 to 1996. Any follower of the sport would easily recognise his running style with straight, out-stretched hands working like knives. He was followed by Johnson, whose stiff upright running posture, and short staccato steps with high cadence defied the conventional wisdom that favoured long, high-knee strides. Johnson proved his point, however, with four Olympic and eight World Championship golds, and in 1996 he became the only athlete to win gold in both the 200m and 400m at an Olympics. His style was all about short, fast, swift ‘drives’ backward to push the body forward.

Without question the most impactful track athlete of recent times has been Bolt, with eight Olympic and 11 World Championship gold medals. Once again, his style was distinct, with his 6 foot 5 inch frame honed to move in the most efficient fashion. Slow motion footage of the Jamaican in full flight shows him almost floating above the ground, with his legs out-stretched and ‘cycling’ between a spike powered pull from ahead to a longer drive behind, and feet seeming to just touch the ground to maintain momentum. Bolt was said to have had scoliosis of the spine in his early years, but worked on that to reduce the imbalances, and his more symmetrical style led to faster times.

APPLIED TO MARATHONS
But these are all short distance events, where hundredths, if not thousandths of a second can split gold from silver, and years are spent honing style. Meanwhile, the myth still exists that changing style is either a mistake, or unachievable, for distance runners. The reality is that in the early years of running, taking minutes off the world record distances was relatively easy, which meant improvements could be achieved through physiological improvement.

Thus the marathon World Record dropped by 10 minutes in the decade from 1950 to 1960. However, it dropped just 28 seconds between 1970 and 1980, and despite it being a highly competitive and financially rewarding era, only two minutes were shaved off the record in the 11 years from 2003 to 2014. Then last month Kipchoge slashed 78 seconds from the record in Berlin, taking it down to 2:01:39.

The point is that in distance running there are diminishing returns from physiological training, whereas the two greatest areas of potential are belief/psychology and efficiency. When Kipchoge ran 2:00:23 in the contrived environment of the Nike Sub-2 Project in Italy, he proved to himself that his body could handle going under two hours. It is simply about getting the correct conditions on the correct day. But it also highlighted the importance of efficiency of style, and if you do an internet search of historical footage of Kipchoge, you will see the evolution of a running style that has been honed to a close-arm action, forefoot striking and backward driving cycle that now maintains good body position throughout a two-hour 42km effort.

Thus a slow motion view of his style in Berlin shares the same principles of Bolt’s running, except there is little forward strike. The foot touches the ground just slightly ahead of the centre of gravity and the high knee, then drives back to propel the body forward. The high ‘bum-kicking’ fold of the leg makes for a short lever, which can then turn over at a high cadence to allow for the next propulsive stride. The arms drive behind but are kept close, fast and aligned to shoulder and chest (perhaps the most obvious progression of his style) to minimise any over-striding. Finally, the position is all held together by the strength of core and enhanced by the shoe design which promotes a forward lean and rearward drive.

PROOF IN THE RESULTS
Efficiency is now a massively decisive factor in long distance running, just as it was in the progression of sprint distances, and middle distances. Put into perspective, Kipchoge’s marathon improvement equates to a two-second improvement over 1500m, or eight seconds over 5000m, where fine-tuning efficiency has been proven to pay dividends. The take-home message here is that improvement is achievable by every runner, but it’s not going to be honed by simply stacking up the distance in training. Improvement will be through efficiency, first by dropping distance and then reducing imbalances, building core strength and developing a more efficient style with improvements in proprioception, cadence and greater ground contact force per stride.


About the Author
Norrie has represented Scotland, Great Britain and South Africa in ultra-distance running and triathlon, and he is an IAAF-accredited coach and course measurer. You can read more from him at www.coachnorrie.co.za.