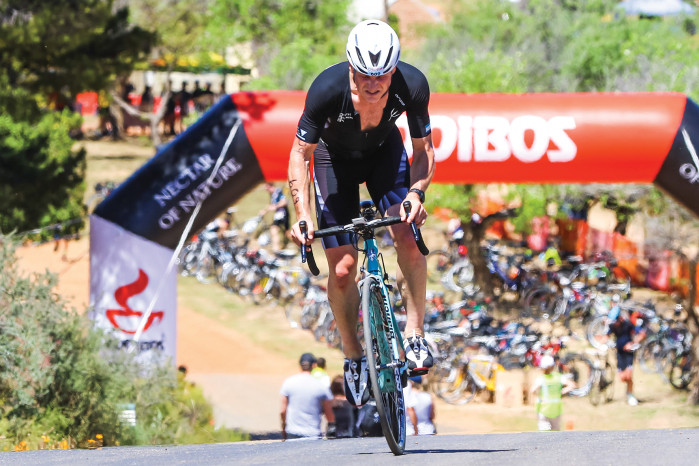 Age is obviously not a limiting factor for 51-year-old triathlete Douglas Burger. At the recent Freshpak Fitness Festival he not only won the biathlon overall, but also won his age category in the triathlon just a few hours later. – BY SEAN FALCONER

When the Freshpak Fitness Festival took place for the 32nd time in Clanwilliam at the end of September, a number of multisport athletes once again used the day-long programme of events to participate and compete in various disciplines, starting with the open water swim in the morning, either the duathlon or biathlon at midday, followed by the triathlon in the mid-afternoon. One of these super-athletes was Douglas Burger of Cape Town.

“I just did the 1.5km swim for a warm-up and to get a nice open water swim in, and then I had to manage my food intake, before the biathlon,” says Douglas. “Next I lined up for the biathlon at 12:30, which I chose over the duathlon because running is not my strongest discipline, so I didn’t want to do two runs before the tri. I had planned to hold back and save my energy for the tri, but we were racing alongside the duathlon entrants, so I realised at the turn point of the cycle leg that I was in the lead when I didn’t see any other blue numbers – and in spite of being stung by a bee on the bike.”

Next up was the triathlon at 3pm, and Douglas says his legs still felt good for another race. “I just knew I needed to get going as soon as possible, before my system began shutting down after the previous event, so I kept moving around. Once we started, the swim felt good, but I knew my age group rival Ludwig Lillie was ahead of me. I caught him just after the bike leg turn, then put the hammer down to open a gap before the run, because he is a stronger runner, but I managed to stay ahead on the run and the job was done!”

MULTI-TALENTED SPORTSMAN
Born and raised in Vredendal in the Northern Cape, Douglas is married to Monika and they have two sons, Hector and Stephan. After school he studied marketing and sales management at Cape Technikon, and today is co-owner and sales manager of Prime Cleaning Suppliers, a business with branches all over SA that he helped launch in 1996 with business partner Trevor Longmore.

In his younger days, Douglas played rugby and did athletics at school, then moved on to road cycling after school. “Where I grew up, cycling was to get from A to B, not a sport, so I only took up competitive cycling in my first year after school, and have now done 26 or 27 Cape Town Cycle Tours, including 17 sub-three finishes.” After his National Service he took up mountain biking, going on to do the Cape Epic twice in 2013 and again this year, when called in as a last-minute replacement due to former Springbok rider Moolman Welgemoed’s partner having to pull out. “I had only started training in mid-May after hurting my ribs in a crash, so I had to work hard to keep up, as he had been training for two years for the Epic! Still, we finished ninth in the 40-49 age category. If I had raced in my 50-plus category, I would have placed third.”

It was while he was in the Defence Force that Douglas started doing triathlons, just to get out of camp on the weekends, and in later years he got the whole family involved in the sport: “I decided it would be lovely for all the cousins to do events together, but I was the only one that stuck with it.” To date Douglas has done one full Ironman and five half Ironman/70.3 races, including the Barcelona 70.3 earlier this year, which he used as his qualifier for the recent 70.3 World Champs in Port Elizabeth.

“I knew I was going to Europe for business, so chose to race in Barcelona because the event forms part of the Tri Club International Champs. I raced for my ATC club, which finished third in our category, and secured my qualifier at the same time.” Then at World Champs he recorded the fastest SA bike split in his age category (2:26:16), followed by an impressive 1:34:08 half marathon run!

STILL PLANNING MORE
However, Thanks to his mountain biking background, Douglas says his favourite event remains the XTERRA off-road triathlons, where he has been crowned SA Champ in his age group seven times. He also went to the XTERRA World Champs in Maui, Hawaii in 2012, where he placed seventh in his category, and says, “My next goal is the Cross Tri World Champs!”

When asked about his age possibly holding him back, Douglas is quick to respond that it’s all in the mind. “For me, the important thing is more a mental than physical aspect. We can all train X amount of hours, but without mental strength you cannot win races. When I am on the start line, I don’t see myself as a 51-year-old, I see myself as guy who can beat the guy next to me. I don’t enter races just to participate, I go to race everyone. That’s how I’m wired.”