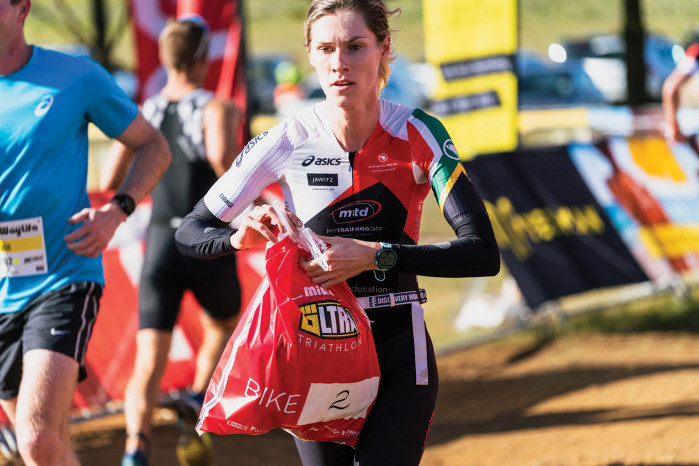 Registered Dietician Mariella Dierks obviously knows how to ‘fuel up’ for optimum performance, given her two podium finishes at two major triathlon races in the first week of September! – BY SEAN FALCONER

After her best swim to date and executing her bike leg plan to perfection, in spite of a headwind for the first 45km, Mariella Dierks started the run of the Ironman 70.3 World Champs in Port Elizabeth feeling like she was floating across the ground. “When my teammate Natia van Heerden passed me at 8km, I decided to try stick to her and we ran together for seven kays. I felt amazing, and when we passed my coach, Richard Lawrie of My Training Day, at 15km, he told us we were third and fourth in the 25 to 29 age category, so I decided to take a risk and go for it.”

Mariella pulled away from Natia and caught the international girl in second at 18km, going on to claim the silver medal position behind fellow South African Jade Nicole. “Going into the race I knew that if I hit the times Richard and I had spoken about, I would have my best ever race, but I exceeded my own expectations. I had told Richard I wanted to go for the podium at World Champs, and achieving that was incredible. To be honest, it still feels a bit unreal.”

Exactly one week later she lined up for the MiWay Cape Ultra at Theewaterskloof Dam, specifically to test her limits. “I decided to do back-to-back races to see how my body will react, since I am thinking about turning pro. Fortunately for me, the swim was cancelled due to the water only being 11 degrees, so we ended up doing a duathlon instead. That played to my strengths, since I am not as good a swimmer, but I had never done a duathlon before, so it was a new challenge. Everybody went out hard, so I got onto the bike already in the red zone. I caught the leading two women after 6km, but then my chain dropped twice and Michelle Krebbs overtook me. I kept her in sight for the next 15km, and once I overtook her again, I held the lead to the finish for the overall win!”

The Journey Begins
Mariella (26) has lived in Cape Town most of her life, except for three years in Austria when she was little, and a few years away for studies. She first completed a B.Sc. in sport science at Stellenbosch University, then completed her B.Sc. Honours degree in nutrition and dietetics at the University of Cape Town, followed by a Community Service Year in Grahamstown in 2016. Back in Cape Town since early 2017, she currently works as the dietician at Velocity Sports Lab in Hout Bay, and is also the consulting dietician at DayToDay, a food box delivery company, where she does menu analysis, content development and new product development.

In terms of sport, she worked as a lifesaver from 2008 till 2015 and participated in competitive lifesaving, winning three long run titles at SA Champs (2009, 2011 and 2015), with a silver in 2014 and bronze in 2012. She also participated in road and trail running, often finishing on the podium, but in 2015 decided to try something new. “I actually have no idea why I entered my first Ironman 70.3 in East London, because I didn’t even own a bike, but I really enjoyed it.” She finished fourth in the 18-24 age category, then went on to finish fifth in her category at the Durban 70.3 later that year.

In 2016, while working in Grahamstown, she finished second at the Eastern Cape Tri Champs and went on to finish eighth in the 20-24 category at SA Champs. She also added more age category honours with a third at the Discovery World ITU Tri in Cape Town, seventh at Ironman 70.3 Durban, and second at the Nelson Mandela Bay 5150. “After that I decided to really give it a go, because I wanted to see how good I can get, so I signed up with Richard and have been training consistently since early 2017.”

Upward Curve
The results soon followed, including an overall win in the Tinman Triathlon in Durban, second overall in the Discovery Triathlon Cape Town, and other solid age category results: Seventh at 70.3 East London, second at Ironman 70.3 Bintan in Indonesia, fourth at Ironman 70.3 Durban, and fourth at the Miway Durban Ultra. This year she added third in her category at 70.3 East London, third overall at the Durban Ultra, and won the Durban 70.3 overall.

Now, with her latest two results added to this already impressive list, Mariella says she has to make a decision on her plans for 2019. “I would like to go to World Champs again, but I am not yet sure about turning pro, since I feel I still have a lot of experience to gain in the sport. But given everything, it was an amazing, special season – if somebody had told me at the beginning of the year these would be my results, I would have told them to stop smoking whatever it is they’re smoking!”