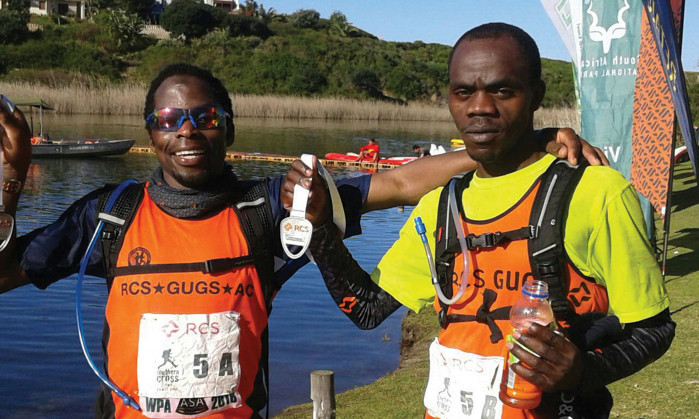 Toes are important to maintaining your balance, and even more so to running, so when top trail runner Imran Paya lost a toe in a freak accident just over a year ago, he thought his running days were done, but his remarkable comeback continues. – BY PJ MOSES

Even though Imran Paya has a pretty good sense of humour, he says it seemed that fate was playing a cruel joke on him last August. Just two weeks after winning the 2017 RCS SOX three-day trail race in Mossel Bay, with teammate Peter Tswayo, he thought his running career was over. “Helping to lift a heavy drain cover at home in Cape Town, it slipped and fell on my right foot and I had to be rushed to the doctor,” he says. Unfortunately, things worsened when the doctor misdiagnosed the injury and gave him the wrong treatment. This led to his big toe becoming badly infected, and in order to save the rest of his foot, the toe had to be amputated. “I was told that I would probably not run again, and even if I did, that I‘ll be slower.”

Unsurprisingly, the decorated and accomplished RCS Gugulethu AC runner says he felt like the carpet had been pulled out from under him. “A month after winning SOX, I was sitting at home with crutches and minus a big toe. I had been training to break the 2 hour 30 minute barrier at the Cape Town Marathon, but now it had all come to an end… and my silver medals at Two Oceans and Comrades felt like somebody else’s achievements.”

Running Talent
The man from Blantyre in Malawi, who has made Cape Town his home since the year 2000, only discovered his talent for running 10 years ago. “Before coming to SA I didn’t run and was a soccer player. I started running in 2008 because my friend Abdul Malick convinced me to give it a go and persuaded me to enter a 10km race. When I finished it in 42minutes, he told me that I was born to be a runner.”

That saw Abdul talk Imran into joining him at the Gugs club in 2009, and soon he was running further. “He kept pushing the bar higher for me. In 2010 I ran my first marathon and first Two Oceans Ultra, followed by my first Comrades in 2011. I competed against myself and wanted to see how much I can improve by finding better ways to train and being conscious of my diet.” That saw him become a serial podium finisher, with PB’s at Two Oceans and Comrades of 3:40:59 and 6:36:39 respectively.

Then in 2015 another running friend and clubmate, Bernard Rukadza, convinced him to try trail running. For Imran it opened a new world of running adventures. “I fell in love with trail. The road can become a bit monotonous, but on trail you need to keep your focus and not hesitate, or else you’ll end up with your face in the rocks.”

Toeing the Line Again
By the time of his accident, Imran had become a force on trail, which made the road back to running all the harder, but he was determined not to give up. “I decided that my story wasn’t done. This was just another test on the road to success,” he says. With the support of friends and clubmates, he worked with podiatrist Chris Delpierre at the Sports Science Institute of South Africa (SSISA) to design a special inner sole to compensate for the missing toe, and he also followed SSISA’s Grucox training programme to strengthen his legs and body. “With the specialised training my body has adapted well and running is less painful. My first long race back was the Peninsula Marathon, followed by a 4:08 at Two Oceans and then the Weskus Marathon, where I ran 2:46 to surprise everyone, including myself!”

With his passion for running reignited, he was determined that he and Peter should return to SOX and defend their title this past August. “Trail running was less painful than road running, so training went well, but running doesn’t give you any guarantees, and I knew SOX was a dream that could become a nightmare.” However, there was no need to worry as the duo comfortably took the win. “I couldn’t contain my emotions when we finished in first place. A year earlier I thought I would never run again, but here I was winning my second title.”

Looking ahead, Imran says he is looking for new challenges, like the Ultra Trail Cape Town 100km later this year, but entry fees are expensive. “Without sponsorship it‘s hard to afford entries and running kit, but I remain hopeful. You get nothing from focusing on the negatives, but if you focus on the positives, your journey will always be better. I am content with life and this helps me to always give my best. When I hit the wall in a race, or in life, I remind myself that other people would love to be where I am, and this keeps me going.”