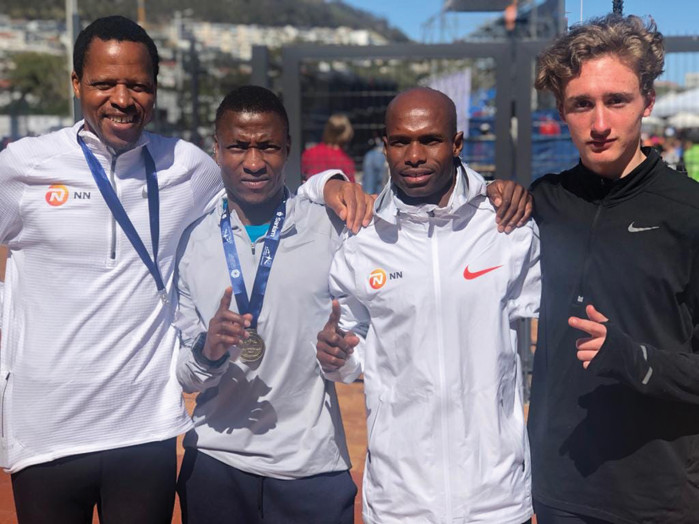 If legendary athlete Hendrick Ramaala’s hard work as a coach and mentor pays off, South African middle and long distance athletes will someday be able to challenge the North African athletes that currently dominate the world stage, but his athletes are going to have to do a lot of laps around Zoo Lake to get there! – BY MANFRED SEIDLER

Swing past Zoo Lake in Saxonworld, Johannesburg each morning and you will see a group of sleek, lean, fit-looking athletes quietly going about doing their training run laps around the Lake. Very little, if any, banter is heard. This is a time to focus, as training is a vital cog in the wheel of the business of running and racing, and these athletes therefore take it very seriously.

When they gather in the early morning and get ready for training, they are usually still sleepy and sluggish, but as the laps progress and the bodies warm up, so too does the speed and fluidity of the group change. By the end of the training session, if you have stayed and watched in awe, you will have witnessed the next generation of racing machines in South Africa.

A closer look, however, makes you realise just how much running pedigree is in this training group. Amongst them is 2:09:31 winner of the 2018 Beppu-Oita Marathon in Japan and two-time World Champs marathoner, Desmond Mokgobu, as well as double 2018 SA 10km and Cross Country Champion, Precious Mashele. You will also notice the still fit and imperious looking SA running legend, Hendrick Ramaala churning out the laps, leading a group of younger middle and long distance athletes who are looking to forge their careers in the sport with success on the international circuit. Just as Hendrick did… from this very venue.

A LIVING LEGEND
When talking road running legends of South Africa with people who know the sport, various names will always be bandied about, but one name that always comes up is that of Hendrick Ramaala. With eight sub-2:10 marathons to his name, two sub-60 half marathons, a New York Marathon title and a runner-up placing in the Big Apple, six finishes in the top 10 of the London Marathon (three of which were third place finishes) and a best marathon time of 2:06:55 (beaten only by Gert Thys' SA record of 2:06.33), Hendrick is rightfully considered one of the all-time best athletes in SA road running. In the latter years of his career he also tried ultra-marathoning, posting a second-place finish in the 2014 Old Mutual Two Oceans Marathon.

He first came to prominence in the athletics scene of the mid-90’s, when he carved out a name for himself as a fierce competitor in both cross country and middle distance track competition. He famously said, after representing South Africa in the 10,000m at the 1997 World Championships, that wearing the South Africa vest was a huge honour. “When you run in the South African colours, there is no pain. You feel no pain.”

When Hendrick started out in athletics, he could be found virtually every morning and evening running around Zoo Lake, churning out lap after lap after lap like a metronome. Whether it was a long run or a speed session, he trained around the Lake. “It is perfect. Soft underfoot, safe, you do not need to worry about cars, and it is at altitude. It worked perfectly for me. I tried to do training camps in other parts of the world, but I always came back here. It just worked for me.”

“Worked” is an understatement, really. It was here that Hendrick laid the foundation for his 10,000m SA Record of 27:29.94, run in 1999 in Port Elizabeth. It was here that he prepared to take on the world’s best at the World Cross Country Champs and the World Half Marathon Champs, and it was here where he forged the steel required to race with the big guns of world marathon running. Twice Hendrick finished runner-up to the legendary Paul Tergat of Kenya at the World Half Marathon Championships (1998, 1999), and in both cases he led South Africa to the team gold medal. And now it is here, at Zoo Lake, that Hendrick is hoping to prepare the next generation of athletes to represent South Africa on the global stage. “This is the ideal place to train. I learnt a lot here in my career, and it is time to now take that knowledge and share it with anyone who wants to run,” says Hendrick.

THE NEXT GENERATION
In 2015, Hendrick Ramaala and Nick Bester decided to team up and try help South Africa’s Marathon hopefuls for the Rio Olympics, and a squad of around 10 athletes was assembled to train together and prepare to try qualify. From there came a longer-term dream. “Why not become a middle distance and long distance training centre and help grow South African road running and middle distance running? We have so much talent in South Africa. I want to help find this talent and develop and grow it. We should be challenging for world medals, but somewhere we lost our way. I hope to build a centre around Zoo Lake, where we train and nurture and grow runners who can make an impact on the world.”

By “build a centre,” Hendrick is not referring to physically erecting buildings to house athletes at Zoo Lake, but rather to build the capabilities of the runners. Of course he would like to have facilities where they can live, but it is mainly about the training as a group, targeting and preparing for races with a focus on the international circuit. “That is where it happens, where the money is, and where the best in the world race. And if we want to be up there with the best, we need to race against them.”

TOUGH TRAINING REGIME
From the original training group that he started with in 2015 – and not all in group were training for the marathon – only Precious and Desmond are still with him, with the others choosing to go their own way, but Hendrick is philosophical about that. “You cannot force athletes. They must want to. I will train anyone who is willing, keen and hungry. But I train hard, so if you come train with me, you need to understand that. And that training is not for everyone.”

Both Precious and Desmond have benefited from Hendrick’s training and hard work ethic, and over a three-year period of training under him, Desmond has improved from a 2:15 marathoner to a sub-2:10 runner. At 29 years of age, he is just hitting his stride in the marathon, and that 2:09 he ran in Japan in February is a breakthrough for him, as it means he will now be of interest to international marathons with his IAAF Silver Label status. “That is what we need to be working towards and looking at,” says Ramaala. “It takes time, but the journey is worth it. Desmond has broken 2:10, a big psychological barrier, so from here it will be easier to get to 2:08 or better.”

Unsurprisingly, the athletes have been asked whether running repeats of the same loop becomes boring, but Desmond says it has actually made him a better runner, and mentally stronger. “Training here on the same circuit day in and day out teaches you to focus. It was hard in the beginning, but I have learned not to be distracted by anything and that has helped in my racing.”

REACHING FOR THE STARS
After training, the group gathers to do some stretching and strength work before going to rest. And tomorrow they will be back, running around Zoo Lake, repeating the process, until the next race and the next step to becoming world class athletes. Hendrick hopes that the success his stars have already achieved will attract still more talented runners to Zoo Lake, and hopefully in the years to come, this will lay the foundation of a group of athletes who can hold their own with the Kenyans, Ugandans and Ethiopians on the world stage. The opportunities are there, the athletes just need to take them.