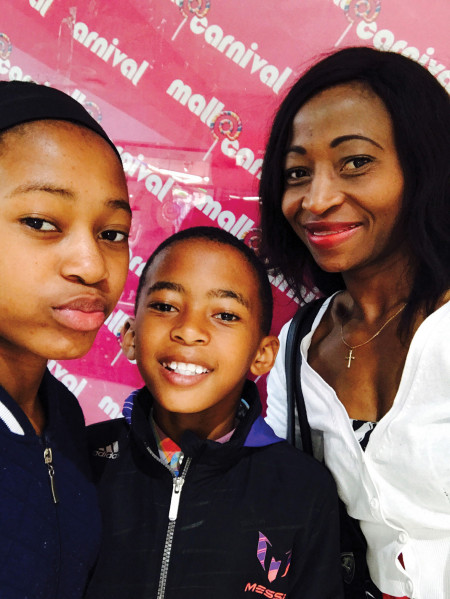 Enie Manzini is an inspirational athlete, firefighter, paramedic, single mom and all-round heroine. She is also a survivor of domestic violence. Sadly, superheroes need a villain to battle, and hers came in the form of her husband. – BY STUART MANN

The cycle of physical abuse started shortly after her daughter was born in 2006. Enie’s husband liked to go out often, partying and drinking, whereas he thought his wife’s place was in the home, and strongly disapproved of her running. Although most of Enie’s runs were done before the rest of the household woke up, he accused her of neglecting the family and putting running ahead of him. He showed his displeasure in the form of frequent and merciless beatings. Regrettably, this story of domestic violence is all too common in our society. Even when Enie managed to obtain a protection order against her husband, the beatings continued.

The turning point in Enie’s life came in 2016, while carbo-loading for the Deloitte Pretoria Marathon. She had just mixed a shake and took a large sip, but it tasted bitter. Heart palpitations, sweating and disorientation soon followed, so she carefully inspected the carbohydrate tub and noticed tiny yellow pellets mixed into the powder. She had been poisoned! Her 10-year-old daughter came to her aid with a glass of milk to help neutralise the poison and Enie managed to drive herself to the hospital, but she realised that she’d had a lucky escape and filed for divorce as soon as she was discharged from the hospital.

From Good to Great
Enie always dreamt of being an elite ultra-marathon runner, and in many ways, this kept her going during those long years of hardship. Freed from an oppressive home environment, she was suddenly able to realise that dream, and after what she’d been through, she says balancing being a single mom with a full-time job and part-time studies was easy. And she went from being a good runner to a great one.

She ran personal bests over almost every distance and brought her Comrades time down from well over eight hours to 7:36. She even managed to win a couple of low-key night races. Suddenly she was a contender, and in January 2017, Enie lined up at Benoni’s Johnson Crane Marathon, in a field full of Comrades gold medallists, but there was a surprise winner in the women’s race – Enie Manzini. Then one morning the phone rang, and Enie could hardly contain her excitement when Ann Ashworth said she was forming an elite women’s squad, and would like Enie to be part of Team Massmart. The dream was now a reality. “It was at that moment I knew God had answered my prayers,” says Enie.

From Great to Elite
Enie had produced a numer of solid Comrades performances in the past, with five sub-9:00 Bill Rowans to her credit, but admits, “I used to cheat on my training and dreaded doing track and speed work.” This year was her seventh Comrades and the first time she cracked silver, coming home in 18th position with a time of 7:21. (She had been on track for an even quicker time before stomach problems resulted in a couple of unplanned stops in the last third of the race.)

She was also part of a bigger success. Although this was Team Massmart’s first appearance at Comrades, they trounced their more fancied rivals to win the elite women’s team prize, awarded to the team whose fastest four members have the lowest combined time, and all the Team Massmart runners taking part ran personal bests, led home by Ann Ashworth’s famous victory.

Enie highlights the role that good coaching, nutritional advice and training support played in her running transformation, as well as the change in mindset and drive that comes from being part of a professional team. “Joining Team Massmart motivated me, it’s a great experience and an inspiration for me to be part of this team. To be in an elite team has changed my running completely.”

What’s next for Enie?
Enie continues to empower herself academically with further studies, to grow spiritually through involvement in her church, and plans to enhance the physical side of her life by training for triathlons as a future challenge. As for running goals, Team Massmart wants to retain the team title at next year’s Comrades, and Enie plans to be up there again with an even stronger performance, perhaps even a gold medal.

Enie Manzini is a great example of someone who has held onto her dreams, struggled through tremendous adversity, and is just now starting to realise her potential. “Although it’s difficult, you can be a mom, have a career and still have aspirations to achieve your dreams,” she says. This is a brave woman who wants to share her story to help motivate and inspire other women – especially those who might be in a similar situation to hers.

About the Author
Stuart’s lifetime goal is to attract a beer sponsor with his running blogs, but he will settle for a travel sponsor so that he can run more races and share their stories. Read his full blogs at http://runningmann.co.za, and follow him @runningmann100.