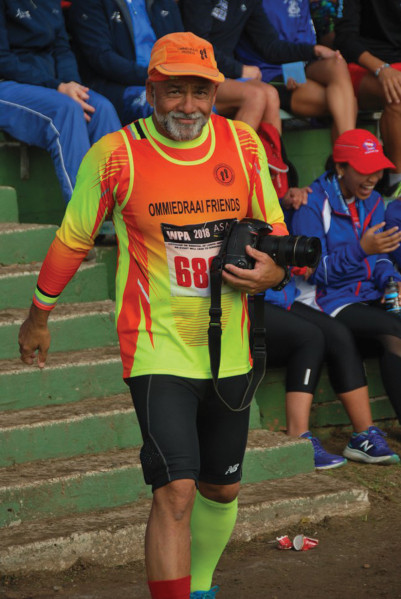 The ball of positive energy that is Mogamat Shahmieg Allie is well known in the Cape running community, both for being one of the spirited leaders of the distinctively bright and vibrant Ommiedraai Friends Athletic Club, along with his wife Gaironesa, and for always having his camera at hand to shoot countless pics of fellow runners. – BY PJ MOSES

He may be well known in running circles these days, but 60-year-old Mogamat Shahmieg Allie admits that his first foray into the world of running many years ago was less than successful. “My first running memory was from high school, when my cousins convinced me to give the hundred metre dash a go. They even organised me spikes to run in, but when I got to the start, everyone else was barefoot and they looked at me like I was this serious sprinter. Reality soon dawned and by the 25-metre mark I was in last place. I made a quick exit off the track and hid away for most of the day, and I only returned to running years later!”

Shahmieg has always been active, being an ardent walker even from his primary school days, and later a rugby player of note. However, when he was diagnosed with type 1 diabetes in 1997, he knew that he needed to stay active, and running helped fill the hole that retiring from rugby had left. Over the years he has run races in the club colours of UWC and Gugulethu, and of course his beloved Ommiedraai Friends, and worked his way up through the distances. “I remember doing my first marathon at Red Hill in 2005 and qualifying for Two Oceans with 17 seconds left before the cut-off. We could still enter manually back then and I went over to the legendary Chet Sainsbury and told him to sign me up. He had a good chuckle. I went on to finish my first Oceans and in 2017 I finished my tenth one, which earned me a Blue Number.”

His next target is getting his Green Number at Comrades, where he has finished five races out of the eight that he has started. “I couldn’t do Comrades over the last couple of years because of the holy month of Ramadaan, which fell over the same period as the race, but next year I will be able to do it if I can qualify. Another race that a friend said I should try is the Washie, but I think I will only do that once.”

FROM HIKING TO RUNNING
The Ommiedraai Friends club did not actually start out in the world of running, per se. The club was created to accommodate the new running goals of a group of hikers brought together by Shahmieg, as his goal of getting people in his community to embrace a more active lifestyle had found fertile ground in those that accompanied the Allie family on their hiking adventures. “My wife and I decided, when our kids were still little, that we would expose them to nature so that they could embrace the beauty outside. It built stronger bonds within our family and later also helped our community to take ownership of their lives and their health.”

The club as a running entity was made official by Western Province Athletics in 2010, with the core of the membership made up of the former hiking group. Since those early days, the club has grown to almost 400 members, with 80 coming from the Northern Suburbs off-shoot, affectionately known in Cape running circles as Ommie-North. “We have grown because of the family feel our club has, and the average age of our executive is just 30 years, because we have fostered a belief throughout the club that the future is our youth,” says Shahmieg.

FIT PHOTOGRAPHER
One of the many hats that Shahmieg wears and particularly loves is that of photographer. You will often see him carrying around his big camera at races to get the best angles of all the action, and he then posts the pics to his own social media pages and that of the club. “I started taking pics of everything I could when my eldest son was born. I told my wife I wanted to record every moment and from there it has just kept going. I like to capture those moments of life that will make fond memories forever.”

For this former rugby hooker, the scrum of life is what keeps his flame burning bright, and to keep himself in tip-top shape and to inspire others, Shahmieg still regularly cross-trains at the gym. He also includes the occasional run and hikes as much as he can. “I believe in the four D’s: Devotion, Dedication, Discipline and Determination. A healthy body breeds a healthy spirit, and there is no better way to that than to do sport – and if you want to encourage others, then you have to lead by example and maximise your efforts to stay healthy and energised.”