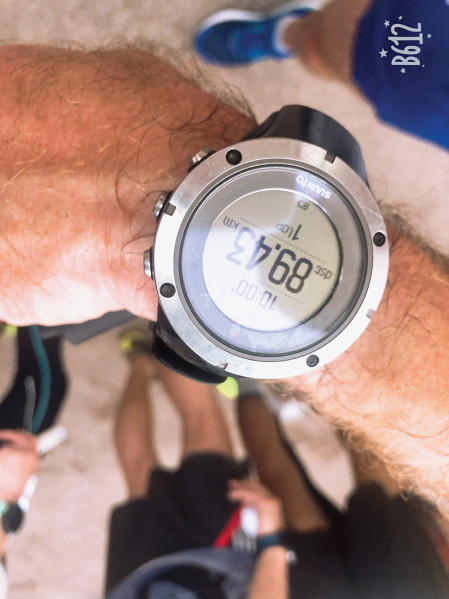 As I am always busy preparing for my next big adventure, and every day is a training day for me, I would like to share this story of an amazing ultra I ran in Thailand. – BY WILLEM RICHARDS

While travelling through Bangkok in May, I was looking for a race to take part in while I was there, because the one way to really experience a country is to get outdoors and be active. The first weekend there was a half marathon in the city, but all entries were sold out by the time of my arrival in Bangkok. I went to the event registration to see if I could possibly secure an official late entry by chance, but with no luck. I did still take part in the race, though – after speaking to the organisers – and ran an unofficial 1:33 as a ghost runner.

Hungry for more, I trawled the Internet and found another race in Bangkok called the Suanpruek99 10-hour Ultra Marathon. All I could make out from the race was something about a 10-hour ultra, because the rest was all described in Thai. I mailed the organisers, who replied a couple of days later with sorry, they’re sold out, so I contacted a friend residing in Thailand, who is also a fellow runner/cyclist, and asked if he could assist in possibly securing me a late entry into the race. He came back 20 minutes later with a number for a wonderfully helpful lady called Sam, who could indeed assist me with a late entry.

I duly spoke to Sam and she said if I was willing, they could help me with a VIP entry, which would mean that I wouldn’t officially be part of the field of competitors, and that my entry fee would go towards their local charity of choice. I loved the idea from the word go, because all I wanted to do is run – I don’t really care for any medal, and if my racing fee goes to a good cause, even better!

Ready to Run
Race day arrived, and I had to be at the race venue at 5am to meet Sam at her gazebo, which I shared with a couple of other solo entries for the day. The race was scheduled to start at 6am sharp and finish at 4pm, with 10 hours of running a 2.1km loop. Seems easy enough, I thought. With some 1000 entrants taking part, the majority apparently solo entries, the race kicked off at a pace of note, and even I got caught up in the music, festivities and all the attractions next to the track. I saw myself finish 42km in around four hours, but I knew from here onwards that I had to start slowing down, as there were another six hours of abuse out there waiting for me.

On the back stretch there was an elderly man who cheered along all the competitors for the whole duration of the 10 hours, always with a smile on his face. His encouragement for each competitor was so genuine, and was just one of the many memorable things we experienced during this day.

That said, it’s hard to gauge where you are in the field of competitors in an event such as this, as there are teams with fresh runners flying past you every lap. Then there are some competitors that take a break after a couple of laps, who then return with their energy levels restored, flying around the track again. I went with the approach of taking breaks when I changed my socks, or shorts. Why the regular changes, you may ask? Well, with the heat and humidity there, it doesn’t take a lot to be drenched in sweat, so my first change of shorts was three hours into the race. Then a sock change at 42km, and so my race strategy continued, with further sock changes every three hours.

A Feast of Running
The 10-hour ultra is hosted in Nawamin Phirom Park, with all the teams and their supporters erecting tents around the park. At each of the 2.1km track corners there were official water and snack tables, and in between these there were numerous other tables with all kinds of snacks and hydration supplements. There was a medical tent with loads of medics on standby, energy drink suppliers handing out their products, and the one turn even had electric fans blowing cool air over the tired runners. There were even water points where they would pour buckets of cooling water over the overheating runners. I have never experienced anything like this before in my life – and it stood out all the more because I come from Cape Town, where we have very strict water restrictions in place.

No expense was spared on food and nutrition along the way. It was as if the music, dancing and jovial sense of all the Thai people in the park carried you along the repeated loops. My favourite part was that there were fresh slices of water melon, banana and pineapple available on each lap, and because the heat was unbearable, it was one of the few things I could keep eating as the day ticked by. I raced each lap with a fresh cut of watermelon in my belly, and it was the sweetest, juiciest water melon ever!

As the day progressed, the teams’ track support started to hand out food, water and encouragement to all the competitors, cheering them on towards 4pm. You could even get a fresh ice lolly or home-made soft-serve ice cream along the track, but I was unfortunately unable to try any of these, as I was worried that my stomach would act up. They really looked so good and tempting. All in all, this was a feast of fresh fruit, food, hydration supplements and water combined with ultra-running, all in true Thai style. This was a true celebration of life and sport.

Done and Dusted
At 4pm the horn was sounded after 10 hours of ultra-running fun and abuse in the blistering heat and humidity of Bangkok, with the race winner racking up a total of 48 laps, which equates to 101km. I had finished 89.43km by the cut-off time, but my distance is unofficial due to racing on a VIP charitable number. If I had an official entry, I would have finished in the top 10.

Thank you to the event organisers of the Suanpruek99 10-hour Ultra for organising such a great, most memorable experience. Thank you also to Tim and Rose, for helping me to secure an entry, and finally, thank you to Sam for the entry, the introductions to all the wonderful people prior to and after the race, and giving me a lift home after 10 hours of ultra-fun! If ever you are travelling through Bangkok and looking for a race, have a look out for this amazing race – just plan better than me and enter long in advance in order to get an entry – so you too can experience a run with the wonderfully friendly people of Thailand.