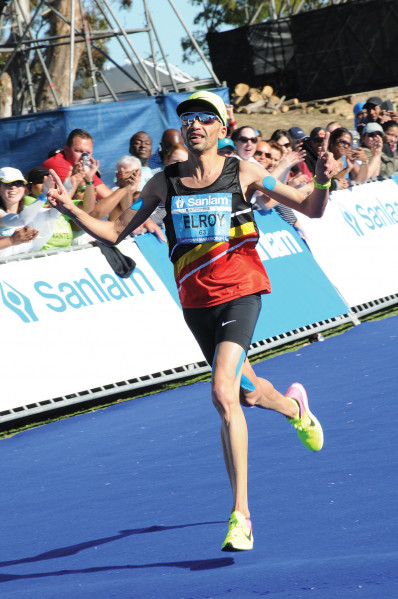 After a year ravaged by injury and recovery from an operation, Elroy Gelant has been putting in the hard yards to build back up to fitness, and some of his recent results have helped restore his confidence, but with another operation still to come, he is very much focused on relaunching his running career in 2019. – BY MANFRED SEIDLER

The pain had become so bad that Elroy Gelant was reduced to a mere shuffle instead of the hard running he was used to. It was December 2017, and the Olympian, South African 5000m record holder and multiple SA Champion in road, track and cross country was not only being robbed of the ability to train, but his hernia condition was also making him doubt his own ability. For an elite athlete who easily churns out three minutes per kay splits, sometimes even faster, not even being able to maintain an easy running pace of 4:15 to 4:20/km was extremely worrying.

“I could literally only do run-walking, so I was doing the parkruns with my girlfriend Tamzin, but it was scary. The SA season was coming up in a few months and I couldn’t string together one decent run. I was really scared that I would not be able to ever get back to the level I am used to, and expect,” says Elroy.

“Then I first saw a knot in the groin area in January, and that’s when my doctor said we should operate. But we agreed to wait until April, as the South Africa season had just started. I struggled on my long runs, but was able to do my shorter sessions without too much difficulty. However, those long runs are important, so I knew that my season would be a challenge, especially towards the end, as my base was not where it needed to be.” Elroy had also just bought a house, and does not have medical aid, so he needed to find almost R60,000 for the operation, meaning he needed to replenish his reserves first.

That lack of base was clearly evident when Elroy tried to defend his national 10,000m title at the SA Champs in mid-March. “I had no strength in my legs. I just felt flat, and the pain was now becoming quite bad. I did not even finish my 10,000m race! It was very demotivating and it made the doubts in my mind about my running career all the more prominent, so I scheduled the operation straight after SA’s.”

Surprising Result
For the next nine weeks, Elroy was not able to train properly, if at all, and even then it took time to build up his strength and endurance again. “I was only able to start training with some effort with four weeks left to go before the SA Half Marathon Championships at the end of July, so I was not expecting anything there. A top 20 would have been great in around 70 minutes.” However, a classy athlete remains a classy athlete, and Elroy surprised himself by posting a time of 61:48 to finish fourth overall and second South African in the NMB Half Marathon in Port Elizabeth, which doubled up as the SA Championships.

Stephen Mokoka won the race overall and the SA title, with the second and third places going to foreigners, hence Elroy’s fourth overall still placed him as second in the SA Champs. It was an incredibly close race, with just six seconds separating the top six men over the line, and Elroy finishing four seconds adrift of Stephen’s winning time. “I was really, really surprised. Finishing so high up and under 62 minutes took away all my doubts about my possibility of getting back to the top, because I definitely did not expect to be right up there,” says Elroy.

“But to be honest, I had no rhythm or confidence, so I actually gave up in the last 2km. It is a terrible feeling to not have confidence in your ability, and I had thoughts of ‘that is the end of my career’ floating through my head. I just started to jog, but then I must have recovered and my pace picked up again. When I saw the other guys coming back at me, I sprinted for the line, and it paid off. Clearly my lack of base work had caused the sluggishness, and of course, my lack of confidence played a role, but after that race, I know things will get better again.”

Another Injury?
Despite the operation and his great result in PE, Elroy says he continued to struggle for form, and then late in August he suffered another scare. Two weeks prior to the Mandela Day Marathon on 26 August, where he competed in the half marathon and finished third, he realised that there was swelling on one of his testicles, which was quite uncomfortable when running, especially on the long runs.

“I was worried that things were not quite sorted after all, so I went back to the doctor and he found that there was some internal bleeding causing the swelling. That was a relief, as I thought it could be quite serious. It is uncomfortable, but knowing it is not serious means I can finish the rest of the season here in South Africa, do some more road races, and then have another small operation in November, which will give me enough time to do the work needed to prepare for 2019.”

Elroy’s plan now is to focus on these races in order to get back some level of fitness, so that when he has to go for the operation in November, the road to recovery will be quicker. Training and racing now for him for the rest of the year is also about the confidence factor. “I was selected to go to the Africa Championships in Asaba, Nigeria at the beginning of August, but I was not even close to being ready fitness-wise. However, I felt I needed that experience of racing against the best to build my confidence and to just have the body remember what it feels like to race at that level, but it was terrible. I was lapped for the first time in my life in a 10,000m and finished in 30:23. Still, it felt good to be mixing it with the best again. It was necessary. I was then asked to do the 5000m, too, which I did, running 14:10.”

Time to Train
While Elroy is rightfully considered an elite athlete – he has, after all, run 13:04.88 for 5000m, and 1:01:10 in the half marathon – yet he still has the same plight as so many of our South African elites: He needs to hold down some form of employment in order to survive. The 32-year-old is an HR assistant at the University of Potchefstroom, which means his day begins at the office at 8am, so his morning runs are done at 4am. That’s very much like most of the runners in South Africa, but when you are competing at the elite level, recovery is vital, and spending a lot of time on your feet is not really conducive to proper recovery. Nor is missing out on that valuable afternoon nap, which is an essential for speeding up recovery.

“I do miss that recovery time, but work needs must come first. With me finishing around 4:30pm, I miss the second training session of the day with the Springs group under Coach Phakati in the winter time. They go out at 3pm to get the ’warmth’ of that time of day, but now when it gets warmer, they will go out again around 5pm, so I will join them. For now, I have been doing my second session on my own.”

Once Elroy has his operation in November he will return to hard training for the 2019 season, which will be an extended season due to the World Championships only being in October. That leaves him with a dilemma, as he is training for the 5000m, but also thinking of representing South Africa in the marathon at the 2020 Tokyo Olympics, which means he needs to run a qualifier towards the end of 2019. The long season will not leave him time get into marathon shape, given that the track season only ends in October.

“I haven’t yet decided if I will try for the marathon for Tokyo, but it is in the back of my mind, and I will need to decide pretty soon, as it will affect my entire preparation for 2019 and 2020. Much will depend on how quickly I feel back to normal after the op in November. But after running 2:12:49 in my debut marathon in Cape Town last year, I definitely have unfinished business with the marathon.”