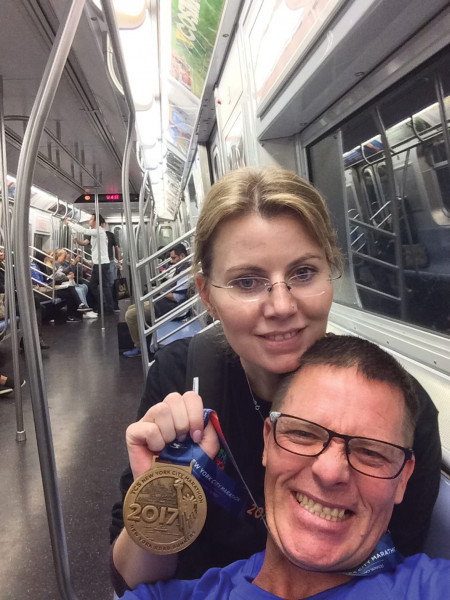 In 2015 Bevan Oschger narrowly survived a hit-and-run accident, but was left with a permanent brain injury. In spite of this, Bevan has taken on some incredible physical challenges, including the 2017 New York Marathon, in order to raise awareness of what it means to live with a traumatic brain injury – and he has big plans for more endurance challenges. – BY SEAN FALCONER

In November last year, an irrepressible spirit called Bevan Oschger completed the New York Marathon, with his two faithful guides alongside him every step of the way. One was Lauren Reimers, a biokineticist from the Justin Jeffery Biokineticists practice in Johannesburg, where he goes for rehab treatment, and the other was Samantha Shirley, an American runner who is a member of the Achilles International Club that sponsors the New York entries each year for athletes with a disability.

The reason Bevan was running with the Achilles Club was that he was involved in a hit-and-run accident in 2015 and left with a serious traumatic brain injury (TBI). While his body recovered from most of the injuries, his brain injury seriously affects his balance and co-ordination, making walking a challenge, let alone running, and he was left with a permanent loss of most of his memory. Just getting to the finish line of the marathon was a huge achievement, but given his never-say-die attitude, it really came as no surprise to those who know him.

“The trip to New York is a bit of a blur, even when I see the pics, but there is one specific thing I remember clearly of the marathon,” says Bev. “Around 25km in, memories of the accident were coming back and stopping me. Up till then everything had been OK, but then both my ankles, both knees and my pelvis all just gave up at 25km, because I had never run that far before – my furthest was a 21km. I went into the second medical tent on the route and I overheard the doctors telling my guides that the race was over for me, but I told myself, we raised all this money to get here, so I can’t quit. I couldn’t go back to my Headway Rehab group and say I failed. I just had to get over that wall. No, make that a mountain!”

That saw Bev leave the medical tent and get going again, eventually finishing the race close to the seven-hour mark, with his wife Angela waiting for him at the finish. “My wife had to be there. She deserved it, because as my caregiver, this is hard for her… a brain injury is really difficult to deal with. I just cried a lot when I finished, because I’m a very emotional guy from my injury, but I took it positively, because I believe that life isn’t over, you’ve got to get up and do the best you can.”

THE FATEFUL DAY
On 12 August 2015, Bevan was on his way home from work on his motorbike when he was hit by a car. The driver sped off, leaving him seriously injured and unconscious in the road. “I was a building contractor, but I had lost my passion for work in Joburg, so I had temporarily moved back up to Hoedspruit, near my parents, to get back into it. I had just finished a job and the client was very happy, and then the accident happened a few kays from home. I have no real memory of the accident, but remember meeting my parents for lunch earlier that day. A lot of my past went with the accident,” says Bev.

He was in a coma for four weeks, and when he finally woke up, he saw Angela sitting by his bed and recognised her. “She said I had woken up 20 times already, but never recognised her. I actually thought the hospital was home, as I had no memories. After being released from ICU into the care of my wife, my recovery started, and six months later, having healed from my injuries, I began physical rehab, because my wife saw that something was wrong with me. It was a case of this guy’s lift wasn’t going to the top floor,” he jokes.

“My left side was slower than the right, affecting my balance and co-ordination, and after many, many months of physical therapy, I was referred to Justin Jeffery for further therapy to heal my broken body. Justin is a biokineticist specialising in spinal cord and neurological rehabilitation, helping patients realise their full potential and regain as much self-sufficiency as possible. His motto is, ‘The only disability in life is a bad attitude,’ and he started me with running, as that helped with my balance.”

ENDURANCE CHALLENGES
Typical of Bev, he went into his rehab programme with a bigger goal in mind than just walking or running. “I had actually gone to Justin to ask him to help me walk to Cape Town to raise funds to pay for my rehab and medical bills, because I didn’t want to be a charity case now that I could no longer work or drive. But then he suggested something even greater. Through his affiliation to the Achilles South Africa club, they invited me to do the New York Marathon, because the Achilles mission is to enable people with all types of disabilities to participate in mainstream running events. I said I had never been an athlete, and had never run before, but I was up for the challenge!”

“I also said yes because Angela had always wanted to go to New York, but I couldn’t get her there before. Now we had the chance to go, but no money, so we used Facebook and BackaBuddy to raise the funds. It was close, but on the last night, with just a few hours to go, we managed to raise the last bit we needed for tickets, accommodation and spending money for a week. It was a wonderful trip, and completing the marathon was an incredible feeling, but my neurosurgeon says he still doesn’t know how I got through the marathon. He thinks it is purely because of my fighting spirit.”

And Bev isn’t done yet. He has agreed to another challenge from Justin, to ride the 947 Cycle Challenge on a tandem bike with Lauren on 18 November, and his training started the same day as the interview for this article. “My body and lungs are strong enough, but it’s very hard, because I am basically learning to ride a bike all over again. I’ve seen photos of myself on a BMX from my youth, so I know I have ridden before, but I have no memory of that. The important things is that Justin and Lauren believe in me, and I trust them to get me there.”

There’s also another running challenge on the horizon for Bev. “A while ago Justin offered that I do the Comrades Marathon next year, but I declined, as I am not sure I can achieve this milestone. In June I changed my mind. Well, actually, Justin finally convinced me that I can indeed complete it, so the weight is now on his shoulders to get me ready. I know I can do a marathon, but I have to now complete a full marathon in less than five hours to qualify, which means I have to cut my New York time by two hours, but I know I can do it… so here we go, the road to Comrades begins!”

POSITIVE OUTLOOK
Bevan is the first to admit that this has not been an easy journey, for himself or those around him. “Many times it was very difficult not to scream out in the middle of the night from pain or depression, but I am stronger now and keep all the pain to myself. I did not expect this to happen to me, but I refuse to allow this injury to get me down. I get up each morning to live another day with passion. I take life hour by hour and appreciate each morning the sun rises, trying to enjoy life and the people around me.”

He says he is also driven to raise awareness of TBI and show others that even with this injury, you can still conquer and achieve, even with all the challenges and hurdles he experiences each day. “I want to help others who have fallen to TBI and are struggling to get up. I want to give this invisible injury a voice, to show everyone that TBI survivors are strong, and our fight is a difficult one, but we will make it.

For that reason, you will often see Bev wearing his favourite T-shirt, with three words on the front. The top line says ‘Impossible,’ the second says ‘I’m possible.’ “I got that shirt at a sports day for the disabled. That day humbled me, because I realised that there were people who had fallen even harder than me, and I want to help them if I can. I want to motivate others and show them that if I can get back up, they can, too. If I can help one person to get up and be strong, then I have made a difference. What I can do now is limited, but I am a voice that can be heard, and can help others to live a different life, a new life, but all the same still a great life.”

SHOW YOUR SUPPORT
If you are inspired by Bevan’s story, you can support him and other TBI survivors by making a donation to the Trojans Neurological Trust, or TNT. This non-profit fund was started by Justin Jeffery in 2007 to provide funding for rehab treatment for TBI patients who show the commitment and desire to rise above their neurological or spinal condition. To make a donation or find more info, go to http://tntsa.co.za, or mail trojansneurologicaltrust@gmail.com.