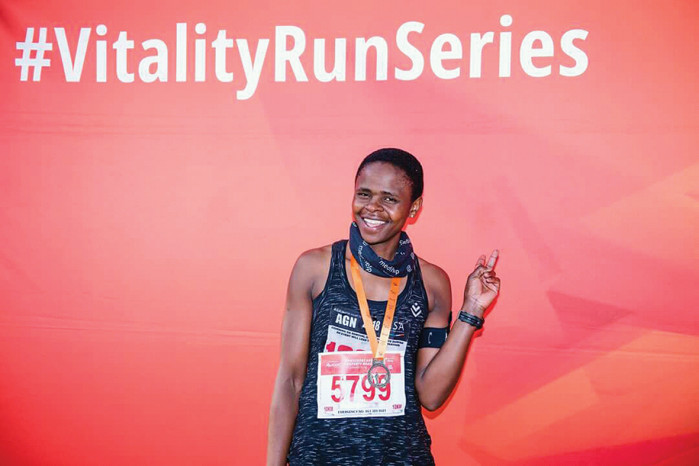 Single mother Thubaelihle Nkomo overcomes challenges daily to create a better life for herself and her son, working full-time as a live-in nanny. Her dream of running a marathon is something she has to work hard for, but that hard work paid off when she was selected as a winner in the Discovery Vitality Run Series, which was a huge stepping stone to get closer to her main goal, Comrades 2019.

Thuba, as her friends call her, only started running last year in November, because she wanted to become fit and healthier, but that soon evolved into a passion for running as she realised what running gave her. “I feel so good when I run, it relieves the stress of a long day and helps me relax,” she says. Training from Monday to Thursday every week has helped her get fit and strong, and she keeps herself motivated by constantly reminding herself that “no matter what job I am doing, there is nothing that will stop me from running, it’s what I love most.”

It is this motivation that made her enter the Modern Athlete Discovery Vitality Run Series Competition, where she stood the chance to win entries into all four races in the series, a customised training programme as well as stylish Discovery apparel, plus a feature in the magazine! “I want to run the Old Mutual Soweto Marathon this year, and running this series would give me the training I need to reach my goal,” says Thuba. “I was so excited when I won, because it meant I could run four races and really work on my running!”

A DREAM WORTH CHASING
Thuba doesn’t believe in doing anything in half measures, so at the start of the series she set herself the goal of trying to finish in the top five in all the races. Starting at the Old Eds Road Race, she ran an impressive 49:22 for 10km, putting her just outside the top 10 in 11th position, running an impressive average of 4:56 a kay, but for Thuba it wasn’t the goal she wanted. “I tried my best, but it wasn’t easy,” she says, adding that it just motivated her to try harder for the next race!

With the Wanderers Aucor Property Race just a week away, it didn’t give her much time to change her strategy, but ever motivated, she decided that she needed to hit the books to see what she needed to change. “I realised that my training still had a way to go for me to achieve my top five result, but the series kept me motivated to keep training, to research how to improve and to mingle with other runners to get advice.”

With the goal in mind of moving up to do her first half marathon soon, she decided to take the next two races as training to learn as much as possible. Managing another sub-50 at Wanderers, Thuba was in high spirits, but knew a big challenge awaited her at the third race in the series, the Adrienne Hersch Challenge, as it features a course with a lot of climbs!

OVERCOMING BARRIERS
Standing at the start line of the Adrienne Hersch Challenge, Thuba had set herself a big goal: she wanted to break 45 minutes for 10km! However, 5km in Thuba realised her goal wasn’t going to happen. “Normally I run a 5km in 20 to 25 minutes, but I was already at 33 minutes and it was just hill after hill – it was my hardest race yet!” Finishing in 51:52, she was disappointed, but knew she had to get over it and move on, as her first 21km was coming up, and she was determined to break the two-hour mark at the Rockies Gerald Fox Memorial Race!

Race Day came and a determined Thuba says she knew this was the last race in the series, so she gave it her all and ran an impressive 1:50:40, putting her well in the Top 100 Women in 51st position, and smashing her goal with just under 10 minutes was the ultimate cherry on top. “This result has motivated me even more to train harder and to run more! Two Oceans and Comrades, I am coming for you!”

With the series well run, Thuba is looking forward to bigger goals, now made more accessible thanks to the grounding that the Discovery Vitality Run Series has given her! And she even has advice for others looking to take up running: “All you need is a pair of shoes and the rest will follow. It doesn’t matter what job you have, if you love running just go for it, as I did. Running changes people’s lives!”