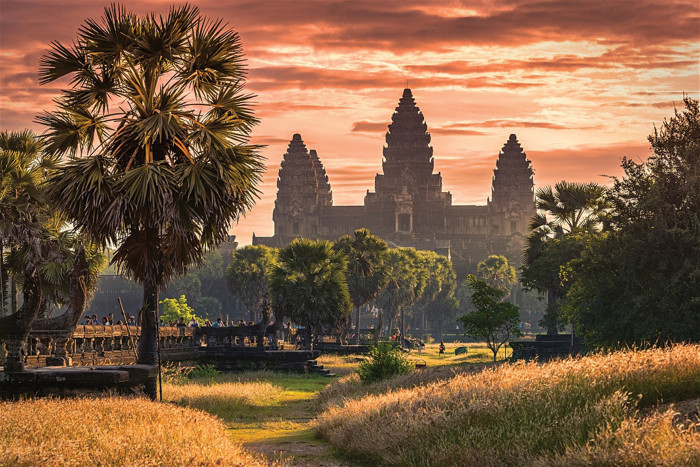 Running the Khmer Empire Marathon in Cambodia was an unforgettable experience, but also a very hot and humid experience! – BY KEVIN ACKERBERG

It was 4am and still dark on Sunday 5th August, but already the temperature was 26 degrees as I stood on the starting line of the Khmer Marathon in front of the Angkor Wat Temple in Siem Reap. As I waited for the formalities to be over, it occurred to me that I was about to embark on a 42.2km run around a World Heritage Site – Angkor Wat was built in the 12th century and is the largest religious monument in the world. It is an impressive sight due to its size and detail.

Interest in the run was sparked when my wife Erica read an article on Cambodia in the travel section of the Sunday Times. When I saw they had a marathon around the same time as our proposed trip, it seemed the perfect opportunity to combine a holiday with a run. I had only started road running two years ago, at the age of 55, because my work involves lots of travelling, and running was the easiest way to keep fit, as all that’s required is a pair of running shoes.

My first marathon was the 2017 Nelson Mandela Marathon in KwaZulu-Natal. I was warned that this was not the best marathon for a novice, but I managed to finish in 4:52:44. Choosing the Cambodian marathon as my next one was probably not the wisest choice either, but what’s life without a challenge? However, my preparation had not gone according to plan. I work out of Accra, Ghana, and running on the road during the week is impossible because of traffic and the lack of pavements. I therefore did most of my training on a treadmill, and according to my training schedule, I was 200km short, so was not at the level I should have been…

Getting Around
Entry to the marathon was a simple online process with a cost of $60, and our travel arrangements were organised by Dave Papenfus of Cambodia and Beyond. We flew via Hong Kong and landed in Phnom Penh, the capital of Cambodia, then spent three days exploring the city and markets, as well as visiting the infamous Killing Fields – a sombre memorial to those that were murdered by Pol Pot and the Khmer Rouge.

On the Saturday morning, we flew to Siem Reap, then hopped on a tuk-tuk to register and collect my race pack. Cambodia has two seasons, rainy and dry, and August is in the middle of the rainy season, so the driver was keen to drive us around on race day, as business is slower during these months. He agreed to meet me the next morning at 3:40am to take me to the start, then fetched Erica a bit later to bring her to the race, and waited until after the race to take us back to the hotel. What an experience to be delivered to the start on a tuk-tuk!

Race Day Dawns
Before the start, there was quite a bit of activity, with stalls being set up, music playing and runners going through their warm-up routines. The field was small, with slightly more than 400 athletes attempting the marathon, but there were many more doing the more popular distances of 3km, 10km or 21.1km. In total, 42 countries were represented.

The route took us into town, then out into the rural areas and returned to Angkor Wat. The course was flat and the running surface mainly tar, and the scenery was interesting and beautiful. Because of the small number of marathoners, at times I was running on my own, but water points were arranged every 2.5km and were well managed, offering water or juice. The last few kilometres took us via the entrance area of the temple, with many tourists looking on. At one stage, there were elephants watching us on the side of the road.

The first half went reasonably well and I got to the 21km mark in 2 hours and 15 minutes, but the second half was a bigger challenge. By then the temperature was 32 degrees, but the intense humidity made it seem much hotter, so I started focusing on running from one water point to the next. I took two 500ml bottles of water at each station, mostly to drink, but also to pour over myself to cool down. Fortunately, the water was ice cold and each mouthful was a relief. Eventually, I made it over the finish line in 5:16:21 – disappointing, as it was 17 minutes over my goal – but I was rewarded with a massage of my tired legs at the finish.

Back in town, I enjoyed an ice-cold 50c (US) draft beer in Pub Street, and from there we went on to enjoy the sights of Siem Reap and then relaxed for a few days on the beautiful island of Koh Rong Sanloem. Cambodia is a fascinating country with extremely friendly people and delicious food. The trip was a great experience and the marathon will always be a highlight in my running career.

For more info, go to www.cambodiaandbeyond.com.