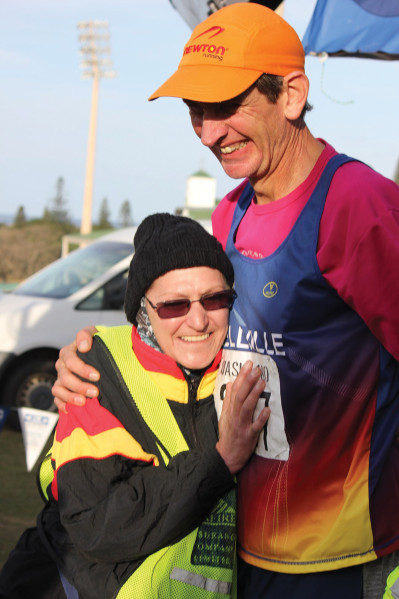 Ina Henning had last seen the famed Washie Moon in 2012, but this year got to experience it one more time out on the road during the Washie 100 Miler, thanks to her long-time friend Hilton Murray and Blitsie the wheelchair jogger. – BY SEAN FALCONER

The Washie 100 Miler is run on the Friday closest to full moon each July, in order to give the runners as much light as possible for the long night of running ahead. The race starts at 5pm in Cathcart, initially doing a few kays through town, then a 35km loop around the town before passing through Cathcart again and then winding down to the coast at East London. Given the fact that this gruelling race only attracts a small field each year, experiencing the ‘Washie Moon’ is therefore a prized bucket list item in SA ultra-running circles – and this year it was made even more special by a partial eclipse turning it into a rare, red-tinted ‘Blood Moon.’

One of the lucky athletes to experience this out on the road to East London was Ina Henning, owner of 12 Washie medals, the most ever by a woman. However, she wasn’t running the race. Ina was forced to retire from running some years back for medical reasons, but her long-time friend and former Ficksberg AC clubmate Hilton Murray had decided to take her along for the run, pushing her in the now famous wheelchair jogger called ‘Blitsie,’ which he has used to push Anita Engelbrecht through multiple runs over the last three years, including the Two Oceans and Comrades ultra-marathons. “Ina’s last Washie was in 2012 and she had told me she wished she could see one more Washie Full Moon, so I decided on very short notice to contact the race organisers, Buffs Club and Border Athletics, to get permission to push her in this race, since I was finally going back to do my second, having run my first with Ina in 1996,” says Hilton.

Ina says it was such an incredible moment when Hilton phoned to invite her to go along with him. “After we ran that first Washie together, I would ask him every year, are you doing Washie, but he never wanted to. Then this year I saw on Facebook that he ran a 100km race and mentioned Washie as his next goal, so I sent him a WhatsApp to say this Washie would be for me. He simply replied, ‘will phone you Monday,’ then he called me to ask if he could push me in Blitsie! I told him I had to talk to my husband first, because I would be starting my next chemo cycle on the Thursday before the race weekend, but in the end I decided to go for it.”

ULTRA FOCUS
Ina (60) has lived in Ficksburg in the Free State for most of her life, and has three married sons and two grandchildren. She used to own a framing business, but sold it and retired in 2015 due to her health. She started running in 1989 because she wanted to run the Comrades Marathon, which she did in 1991, and says she just carried on from there. “I loved ultras, and went on to do my tenth Comrades in 2000, which was very special because it was the first year for the new Bill Rowan medal and I got one. I finished on 18 consecutive finishes, with my last one in 2008, but I was already struggling with my health, and while I did go back for two more, I could only get to 3km and 7km from the finish by cut-off.”

She also ran many other ultras, including 11 finishes at Two Oceans, as well as winning the Laingsburg Karoo Ultra 80km twice. However, it was the Washie that became her focus. “When Hilton decided to go run it in 1996, I asked to go with. The whole Ficksburg Marathon Club went with to second us, thinking they were going for a big jol, but it almost turned into a nightmare for them, because the Washie is hard work for the seconds. At one stage Hilton and I split up, so the seconds had to split as well. We both struggled a bit, but we finished and both came home with trophies.”

“When we got back to Ficksburg, I wasn’t even thinking of running it again yet, until one of our clubmates, a doctor called Dawie, commented during a morning run that the only reason Hilton and I finished was probably the drip he gave us along the way. Well, I was so angry that I decided to show him I can do it without a drip, so I went back the next year, with Hilton seconding me. He never wanted to run it again, because I think he simply didn’t enjoy the race, but I fell in love with the race, and so just kept going back.”

CHASING THE RECORD
That saw Ina run her best time of 19:19 in 1999, then get her permanent Number in 2000 when she ran her fifth Washie. “I then decided to keep going, as the woman with the most finishes had seven, but was now retired from the race. So I went for eight, then because I was so near to 10, I carried on and received my Washie Shoe in 2005. In 2007 I finished my 12th, but my body decided that would be my last. I realised something was stealing my energy, so I went to see the doctor, and that changed everything.”

After a battery of tests, the doctor told Ina she had scleroderma, a rare and incurable auto-immune condition in which the body produces too much collagen, causing the skin and connective tissue to thicken and harden. Ina says that made her realise that her Washie days were done. “I carried on walking and tried running short distances, but eventually went over to cycling to maintain my fitness.” Then in 2014 she was diagnosed with breast cancer and underwent 18 months of treatment, but six months later she began coughing, and nothing helped to stop it.

“They did a scan and found cancer in one of my lungs, which was unfortunately inoperable due to being too close to the bronchial pipe, so I have undergone four cycles of chemo since then, but the cancer is still spreading. It is now in both lungs and I struggle to breathe, which means that my muscles don’t get enough oxygen as a result. Even cycling is now a struggle, because the downhills are not a rest opportunity for me, as I am still catching my breath from the previous uphill!” (At the time of this interview, shortly after her Washie outing, Ina was still busy with her fifth cycle of chemo)

ONE MORE WASHIE
However, her medical condition was not going to stop Ina from going for one more Washie, and thus she readily agreed to Hilton’s invitation, in spite of knowing how tough the route is. “He had to get special permission from the organisers, because the first 35km loop has no shoulder on the road, and is run in the dark. So we started together for the first few kilometres, then Hilton did the loop alone while I waited in the car with my husband, and rejoined him for the rest of the race.”

“It was a bit windy and cold at the start, and it began raining while we were waiting for Hilton, so I just prayed for the wind and rain to stop, or else he wouldn’t be able to push me. It was still cold by the time he got back, but the worst had passed, and just as Hilton picked me up again, the clouds opened up and I got my Washie Moon! At 80km, I was extremely cold due to sitting still in Blitsie and my feet felt like they were going to fall off, so I took out a scarf, cut it in half and wrapped the pieces around my feet. I was praying for the sun to come out, but Hilton joked that sun makes him lame. I really felt sorry for him, because it was just one hill after another. The second half was warmer once the sun came out, but luckily it was a cool day, otherwise he really would have suffered!

Hilton and Ina crossed the line in 22 hours and 56 minutes, finishing 57th out of 122 finishers, and unsurprisingly, they received massive support all along the route, with fellow runners and their supporters going out of their way to offer help and encouragement. “They kept telling us what an inspiration we are, and it was wonderful to reach the finish. That last section was so emotional, and there was an incredible spirit at the finish.”

“It was just such an incredible privilege to go back to the Washie… I had had this big hole in my heart since 2012, and had even thought about going to second others, just to be part of it one more time, so I was overjoyed when Hilton asked me to go with him. I have no idea where he got the strength to push me all that way, but he made my biggest dream come true, and I told him I think he is sent by the angels. What he does for others cannot be described in words, because it is so big, and I want to thank him from the bottom of my heart.”