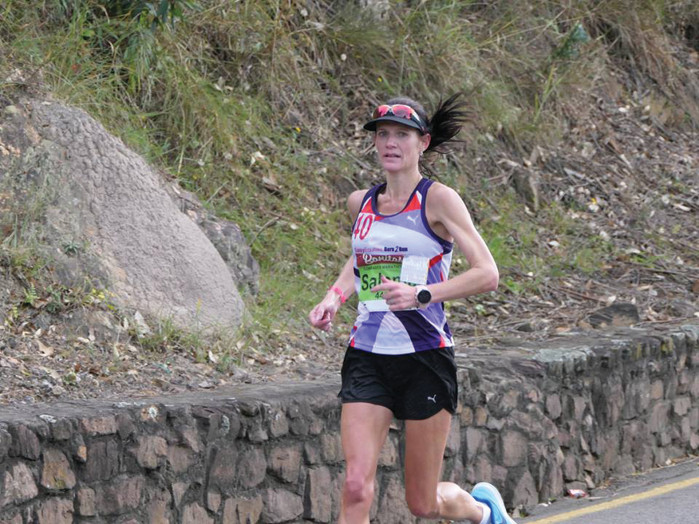 So far 2018 has been an incredible year for Salome Cooper, from winning the Om Die Dam 50km in March, to her best ever run at Comrades, and then leading the SA women’s team to a silver medal at the World 100km Championships in Croatia, while also bringing home an individual top ten position. – BY MANFRED SEIDLER

In spite of being tired from a long flight back to SA, coming just a day after running the World 100km Championships in Sveti Martin, you could not keep the smile off the face of Salome Cooper when she arrived back in SA on Monday 10 September. The day before she had finished seventh in the women’s field and led team mates Deanne Horn, Fikile Mbethuma and Lisa Collet to a team silver, to go with Bongmusa Mthembu taking third overall in the men’s race, while also leading the men’s team to a silver medal. “I really did not expect such a good 2018, but it has been incredible,” enthused Salome after touching down at OR Tambo International Airport, but that hardly does her great year justice.

It was clear Salome’s running was going well when she unexpectedly won the Om Die Dam Ultra Marathon at Hartbeespoort in March, beating a solid field in the process. “That came as a complete surprise for me. There were some strong women racing, but I felt I had more in the tank if I needed it.” She covered the 50km in 3:39:48, finishing some 11 minutes ahead of second-placed Cobie Smith. Her next big race, another 50km at the Loskop Ultra in April, saw her place fourth overall. “Loskop was really just a hard training run for me, so finishing fourth behind Charne (Bosman), Ann (Ashworth) and Jennifer (Koech) was really a good place to be.”

These were already impressive performances by the single mother of a 14-year-old son from Boksburg, given that she works full-time as a sales rep. That means her day starts with a run in the early morning, then a full day on the road before doing her main training in the evening, sometimes only finishing around 8:30pm, but more success was to follow at the Comrades Marathon in June. Salome came home in 6:53:18, finishing 11th, a mere minute behind Yolande Maclean, and thus just missing the last gold medal, but she was still happy with her performance. “Sure, the gold would have been nice, but it was my best time ever, and over 90km, not 89km, so I really am very happy with that run.”

Unexpected Call-up
After that, Salome was ready to put her feet up for a bit, but then came the request to be part of the South African team for the World Champs. “That came out of the blue. It is a huge privilege to run for your country and I was at the World 100km Championships in 2011, where the team won bronze and Lindsay van Aswegen ran an individual bronze. But that was seven years ago. The world of ultra-running has changed and whatever experience I had picked up then wasn’t really going to be of much help to me. And there was not much time to get ready. But how could I say no? It is such an honour.”

Neither Salome nor any of the other women who went to Croatia were expecting to be racing at a World Championship event a mere two months after the Comrades Marathon, so all their preparation was geared towards the 90km Down Run on 10 June. “All indications were that I was in good shape and that I would have a good Comrades, but at no stage did the World 100km Championships ever enter into the equation. Being selected was a big surprise for me, and then I found the all-important preparation was tough. All the other ladies I usually train with were in rest phase, so I had to do those dreadful long runs on my own. Imagine running the equivalent of a Two Oceans Marathon on your own at under 5min/km. That was incredibly hard.”

When the team left SA on Tuesday 4 September, Salome found herself sitting at the top table during the press conference that saw the team off, and as Team Captain she was expected to say a few words. Despite the evident emotion and maybe a hint of stage fright, there was no mistaking her confidence in both the team and in herself. “We have a strong team. Everyone has prepared really well, Athletics South Africa has been very supportive, so we should be able to give a good performance.” Asked about her own expectations, she said she was hoping for a 7:30 finish.

Counting the Laps
In Croatia, the four South African women ran together as a team for the first 60km and were lying 16th, 17th, 18th and 19th,but then Salome surged as she began to reel in several women who had gone out too hard. She gradually moved up the field to 12th, then 10th and finally into seventh, crossing the line in 7:51:13.“We decided to run as a team and it paid off, but Deanne unfortunately became ill during the run, so who knows how well we could have done had that not happened. We knew a few of the ladies from Comrades, so when I started to catch them it really gave me a huge boost. But it was hard. The route was laps of 7.5km and we went past our hotel every time. Do you know how hard it was not to just go to my room, especially because it is a hotel with a hot spring!” she says with a chuckle.

“I did not expect to finish so well, which makes this a big achievement for me. In hindsight, I think I spent maybe a little too long at the two water stations, but the route was also not flat as we originally thought, so I think that is where I lost time. What was really good was that as we were doing laps, the men’s team would go past us and that lifted our spirits. It also gave us a chance to cheer them on and when Bongs was struggling, I could lift him with some encouragement.” (Bongmusa said that Salome’s words of encouragement made a big difference, as he was really struggling with stomach cramps in the last 10km.)

No Regrets
Ironically, after such a successful year, Salome says she has one small lingering regret. She only started running seriously later in life, and like so many others went straight for the Comrades, a race she has now run 17 times, with three gold medals to her credit, but she openly admits that if she had focused more on the shorter events prior to going into Comrades, she may well have done better. “Yes, I think I could have gone faster, but I can’t change it now. My running is going really well, so I am not going to beat myself up over it. At the beginning of 2018, I could not have imagined such an incredible running year, but doing well at Comrades and then the World 100km – which was really a bonus – has made all the toil and early mornings and stress so worth it. There is nothing I would change if I had to do it all over again.”