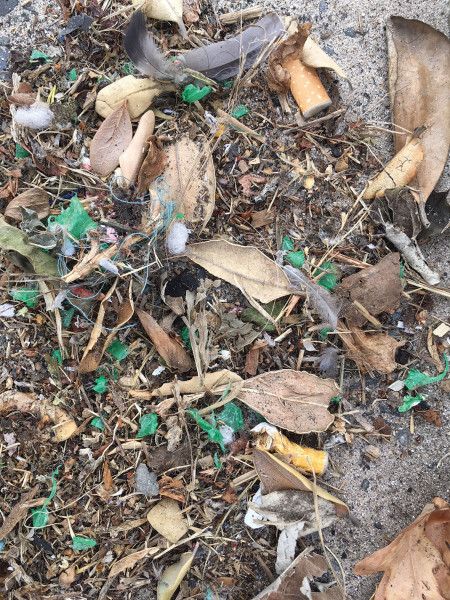 You reach the water station in your race, thirsty and looking for a mouthful of cold water to refresh yourself, and that sachet feels so cool in your hand. Bringing it up to your mouth, you carefully hold the sachet firmly while trying not to squeeze too tight, and then you bite the corner off. Quickly spitting the little plastic corner out, you take a long, cold drink, and feeling refreshed, you toss the now empty sachet in the Garbie dustbin and on you race. You’ve done your bit to #runclean…

Ever wondered what happens to all those little plastic corners of sachets that thousands of runners spit out on to the road during races all over South Africa? Well, for one thing, they seldom get picked up by the clean-up crew once all the runners have passed by, because they’re just too small. Most of the time the clean-up crew doesn’t even see them.

BUT ANIMALS SEE THEM…

Most of those little corners get blown in to the bushes or grass beside the road, where birds and mammals all too often swallow them after mistaking them for something small to eat. In coastal areas particularly, these corners very quickly end up in stormwater drains or rivers and thus flow out to sea with the next rainstorm, where they too are mistaken for food. To a turtle, that small bit of plastic actually looks like a tasty little jellyfish treat. But instead of nourishment, all the turtle gets is a stomach full of plastic that it can’t process or expel, which clogs its system, and eventually the animal dies a very slow, painful death. Fish are also ingesting this plastic. The same fish we have on our post-race celebration sushi platter! So it is impacting on our health, too.

So next time you race, don’t just throw your empty sachet in the dustbin, make sure that even the smallest plastic bits don’t end up in the environment. Because taking an extra second or two to dispose of your waste responsibly could save a turtle, an ostrich, a dolphin or an albatross from a painful death someday. Sounds dramatic, we know, but sadly, it is happening – with so much of the single-use plastic we use and discard every day, not just our sachets.

Modern Athlete’s #runclean Campaign is part of a growing effort to stop runners littering during races, as this contributes to still more plastic waste ending up in our ecosystem. Think before you throw – #runclean!