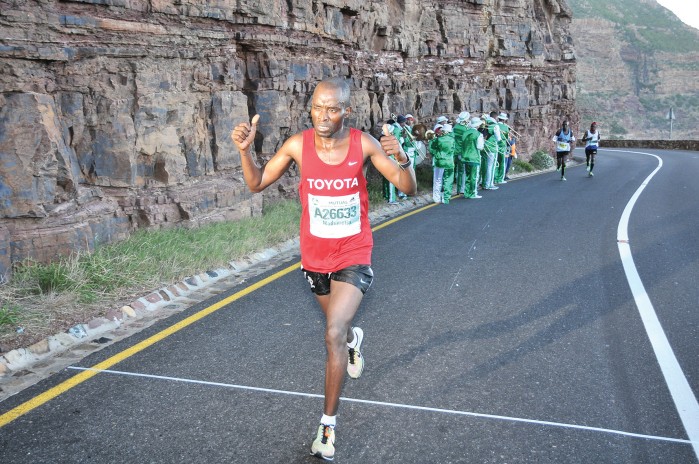 You’ll find Madumetja Donald Mathipa behind the microphone at many races in the Gauteng area, greeting you the minute he sees you, whether you are a supporter or a runner, with something unique to say about each person, but while he loves doing race commentary, his real passion lies in his hometown race in Tembisa. – BY MANFRED SEIDLER

He started his announcing ‘career’ in 2008 when he ran for the Powerade team managed by the late George Koertzen, who at the time was the foremost race announcer in Gauteng. “I was doing a course in communication science at UNISA and approached him, because I wanted to add to my skills. He asked when I was available and that was it,” recalls Donald. “I did my first stint at the start of the Vodacom Country Challenge and then he used me at more races. He also sent me to Swaziland so I can say I am an international race commentator!”

However, while Donald can be seen on the mic most weekends, this is not what he considers a career. “I love talking at races and have fun with the runners, but for me this is a sideline. I really want to see races in the townships grow and uplift the communities, in particular in Tembisa, where I have lived since 2009.”

The Dream
Donald originally hails from Limpopo, where he honed his early running career. “I was good over the shorter distances, up to the half marathon, but I did the longer stuff because that was the only way I could run full time. But my heart and my body are in the shorter distances.” He moved to the Kempton Park area to be able train at Esselen Park with the Nedbank Soweto team, including future Comrades winner Modibe Ludwick Mamabolo, but like so many promising athletes, Donald had to work to live and thus could not focus solely on running.

He also found that the mileage required to run Comrades as a contender did not agree with his body, and since he couldn’t earn a living just racing the shorter distances, he had to shelve his dream of being a professional athlete. Instead he ploughed all his energy into what was to eventually become the Tembisa Mile. “We do not have many well organised and supported races in the townships, but it is important that we do have events here, for a number of reasons. It brings the community together and they take ownership and take pride in it. It also opens up opportunities to the community either to run, or to get into organising events.”

The Mission
So Donald embarked on a journey in 2010 that changed his life, when he and a few others in Tembisa decided to put on a road race. “We started with an 8km and 3km race. We wanted a competitive race with medals and prize money in a township, but it wasn’t easy, we really struggled in the beginning, and so decided to change the 8km to a 5km in 2011. We had some leftover T-shirts from other races and used them as incentives, and some of the better runners came, but the masses didn’t get T-shirts, because we just did not have enough. So we thought, let’s do something unique, and in 2012 we introduced the mile, taking place after the 5km, because we want the runners to see our best athletes competing in the streets of Soweto.”

Over the years Donald has attracted the who’s who of South African middle distance running to his event. The first winner of the mile in 2012 was Dumisane Hlaselo, who has represented South Africa on numerous occasions, and a big breakthrough came in 2013. “Johan Cronje had just won the bronze medal in the 1500m at the World Championships in Moscow that year, and we got him to come and run in Tembisa. All of a sudden the media were interested and the other top runners wanted to race in our mile. Since then the mile has become a big event for us, and gives us good coverage.”

The mile was initially just run as a mass event; now there are categories for both senior and junior men and women, and a big coup was having Caster Semenya win in 2016. Meanwhile, the original 8km is now a 10km race and has seen the likes of multiple SA Champions Stephen Mokoka and Elroy Gelant race through the streets of Tembisa. It has been suggested to Donald that he add a half marathon, to further grow numbers, but he is loath to do this. “Since anyone can do the 10km race, that’s where we believe we can attract numbers. Also, we simply do not have the logistics for a 21km, and a 10km means we do not need to use the Metro for a longer period of time, nor inconvenience the Tembisa residents’ daily routine.”

He explains that the 10km starts at 7am and the first mile starting straight after the 8:45 cut-off, so they are finished by 10am. “The mile doesn’t impede traffic, so we are in no way disrupting the day to day ‘running’ of Tembisa. We do not want to be a nuisance to them, we want their support. The taxi associations also help us and do not interfere. Yes, there is always that one driver, but that happens everywhere. Local business helps with small things and the community love the race, so it has been good for us.”

The Challenge
However, it is not all plain sailing. Race organising costs big money. Metro services alone set the club back a whopping R45,000, and of course there is prize money, too. Then there are those who volunteer their time and need to be looked after. “Our volunteers are part of the community and we need to put something back into the community, so we need to find a way to show our appreciation. That can be money, T-shirts, food, or all of the above.” The race has come with other challenges too… Donald laughingly recollects how a resident forgot to close his gate on race day in 2013. “His dog came out and chased the runners. Maybe that is why Johan Cronje set a course record!”

Overall though, Donald says it is more than just about having a top notch event in the township. Currently, the Tembisa Athletics Club members do their track work on the clay track of the Tembisa High School. “One day we want to host an athletics meeting there, but we need to upgrade a few things, like toilets, parking, seating. We try set aside some of the money we raise from the race, but we also need money to help our runners get to races, so if we can turn this race into something bigger, then maybe we can achieve those objectives.”

True to his humble nature, Donald does not like the term Race Director. “No, no, I am the team leader, not a race director.” But he deserves huge credit for growing the race from a 400-entry fun run to a 2000-entry 10km race in seven years. Entries are now open for the 2018 race on 28 October, and it is sure to be another classic.