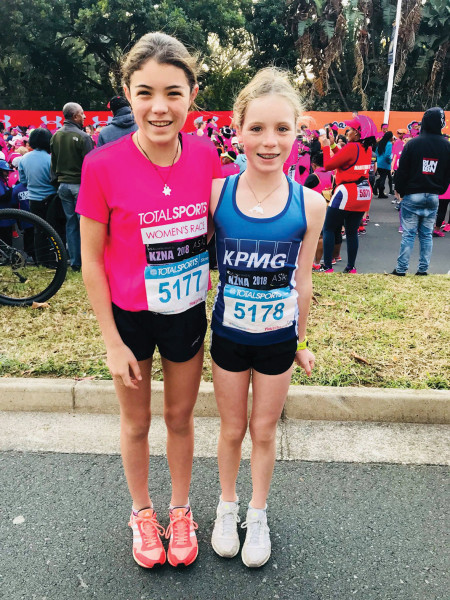 They may still be young, but Nix, Rylee and Tao Challenor are definitely following in the footsteps of their running mom, Jenna Challenor. – BY SEAN FALCONER

When 11-year-old Rylee Challenor hit the track at the Totalsports Women’s Race 5km in Durban in July, the commentator couldn’t refrain from announcing, “Here comes our winner, and she isn’t even as tall as the fencing!” She crossed the line in a scintillating 20:40, watched all the way by her proud mom, Jenna, who won the 10km race here in 2013, and since then has run for SA in the World Half Marathon Champs as well as finished runner-up in the 2017 Old Mutual Two Oceans Marathon. Taking it all in her stride, Rylee says she just focused on having fun in only her third ever 5km race.

“Before I ran, my mom told me it’s an adults race, so just go have fun. I had never run a big road race before, so I was very nervous. When I started I was running with my sister Nicky until she saw one of the girls who races me at cross country. She encouraged me to leave her and go race, and as I did she shouted, “Go, Rylee, go,” and I felt so happy to have my big sister there for me. I was in second place behind an under-15 girl until 4km, where I saw my mom and dad, and then went into first place. When I finished I had my first interview while my mom jumped over the fence to hug me.”

When 13-year-old Nicky came in a few minutes later, Rylee was waiting on the line, which her older sister really appreciated: “It made me feel so happy and so proud of Rylee’s achievement. I loved it when she hugged me as I finished the race.” Meanwhile, Jenna says she and husband Brett were surprised to see Rylee win. “We don’t let her run this distance often, so she really shocked us, but it’s back to cross country and track for her now. I believe that at their age less is more.”

TALENTED TRIO
The three Challenor girls have clearly inherited some serious sporting genes from their parents, both of whom are active runners as well as being former lifesaving internationals. Nicky has provincial colours in biathle, medalled at SA Lifesaving Champs, and is excelling at swimming, hockey, water polo and cross country. Rylee has won most of her cross country races over the last three years, also won the Long Run event at SA Lifesaving Champs, and was selected to represent SA in the USA at the Biathle World Champs.

Although just six, Tao is already showing signs of sporting talent, says Jenna. “Earlier this year, when the older girls were getting their gear ready for a Mudman triathlon, she asked to do the Mudskipper race. Brett lined up with her amongst all the other parents, only to be told, ‘I’m good, Dad, you can wait over there.’ I expected her to come tootling in last, so almost fell over when she finished the bike leg in second behind a boy and proceeded to charge past him into first place!”

FULL SPORTING CALENDAR
Nix and Rylee both finished second in their age groups at their recent district cross country champs, thus qualifying for the KZN provincial champs in Newcastle in early September, which Nix is particularly happy about. “I was determined to make the district team this year, so that I could go with Rylee to the KZN champs – and it’s on my 14th birthday, too!” This will also make it easy for Brett and Jenna to support both girls, but that is not always possible, as was the case in July. “It hadn’t happened before, but I suspect it may happen more now,” says Jenna.

“Rylee had a sports day in Durban and Nix had district cross country champs in Pietermaritzburg on the same day, so I asked the girls who they wanted to come to their races. Nix said she didn’t mind, and Rylee suggested we both go watch Nix, as we had watched her race a few days before. I just couldn’t leave her with no-one at her sports day, so we decided Brett would go watch Nix, seeing that he works in Pinetown, and I would watch Rylee. He was given strict instructions to film and photograph her race, which he sent to me straight away, and I did the same for Rylee’s race, so it worked out fine in the end.”

Looking ahead, Nix says she just loves running for fun, but Rylee has already decided that she would like to become a pro athlete. “One of my dreams is to run for South Africa, like my mom. She really inspires me and makes me want to run more.” Meanwhile, Jenna has just started running again after a tibial stress fracture injury and says she can’t wait to get back to full training. “This injury has made me realise how much I love running, and that’s why my heart bursts with pride at my girls, not just because they are doing so well, but more because of how much they love running. I really believe that at their age it’s all about fun.”