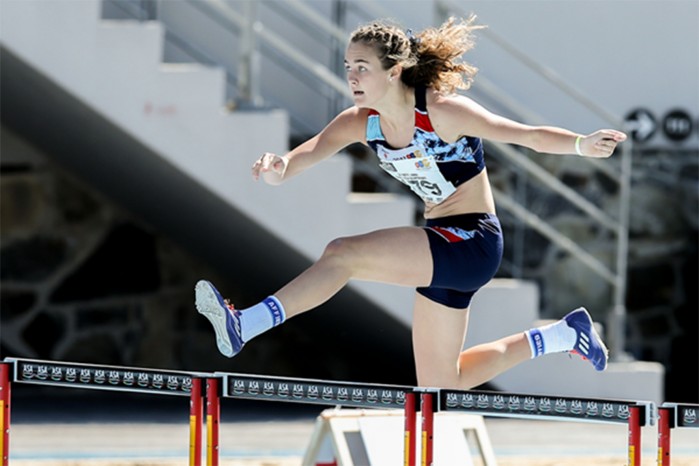 In any hurdles event, it pays to have a never-say-die attitude, because the technical nature of hurdling can throw up some unexpected results. For example, last July at the 2017 World Under-18 Champs in Nairobi, Kenya, Jamaica’s Sanique Walker entered the home straight with a massive lead in the final of the Girls 400m hurdles and looked to have the World Title sown up… until she hit the last hurdle and stumbled. That allowed second-placed Zeney van der Walt of South Africa to close the gap and sneak the win by just 0.04 seconds in 58.23. “I didn’t expect to win, I just kept on pushing till the end because I still had the energy,” she says.

Almost exactly a year later, having recently turned 18 in May, Zeney lined up at the World Under-20 Champs in Tampere, Finland, winning her qualifying heat comfortably in 57.78, the only athlete to dip under 58 seconds in the heats as she held back and just made sure of automatic qualification for the final. Two days later in the final, in spite of wet conditions and even though she was the youngest in the race, she showed her true speed as she came home in 55.34, finishing well clear of another Jamaican, Shiann Salmon, who clocked 56.11.

That made Zeney a double World Champion, something she still finds hard to believe. “It was incredible to win in Finland, but I think it still has not really sunk in that I won two World Champs. Last year’s win was a bit of surprise, but this year it was a totally different race. I had the fastest time in the field this year, so I knew I had a chance to win. Due to being Under-18 World Champ, I did feel a bit of pressure, but I didn’t let it get to me. When I went down in my blocks, I wanted to go for the win!”

STEADY RISE
Zeney says she fell in love with the sport in primary school, where she ran the hurdles for the first time in grade four, while also competing in the short hurdles and the 400m straight, but the single-lap hurdles became her focus – and success has followed. In Grade 9 she won the SA Sub-youth Title for the 300m hurdles, followed a year later by the SA Youth Title for 400m hurdles. In Grade 11 she ‘doubled’ by winning the SA Youth Titles for both the 400m hurdles and 400m straight, clocking 57.94 in the hurdles final to narrowly miss 2014 Olympic Youth Games Champion Gezelle Magerman’s SA Youth Record by just 0.03 seconds, and then she followed that up with the Under-18 World Title.

This year has been even better! She won the SA Under-20 title and then followed that up with a second place at the SA Senior Champs, only just losing out to Olympian Wenda Nel in the final. Wenda clocked 55:01 to Zeney’s 55:05, with the youngster only losing out after a slight stumble at the final hurdle, but her time was good enough to move her up to fourth place on the South African senior all-time list, and to finally beat Myrtle Bothma’s 35-year-old SA Junior Record (55.74). Afterwards, Wenda admitted that Zeney had really pushed her to the limit: “This was one of my toughest races, but also one of the most exciting. To be challenged the way Zeney did forced me out of my comfort zone.”

In turn, Zeney gave credit to Wenda for helping her to run so well. “Last year I took on the seniors at SA Champs for the first time and finished third, so second this year was still better, and to hear Wenda say it was one of her hardest SA Champs wins was a real compliment. Wenda helped me run that time, and then after the race, when she was supposed to get the attention of the crowd, she asked them to give me round of applause instead. That was an unbelievable privilege.”

TAKING ON THE WORLD
That performance set the scene for Zeney’s dominant World Champs run in Finland, and now the youngster is looking forward to representing her country again in the future. Currently in her Matric year at Afrikaanse Hoër Meisieskool in Pretoria, she is planning to study at the University of Pretoria next year, while focusing on qualifying for the 2019 World Champs in Doha, followed by the 2020 Olympics in Tokyo. “I don’t focus that much on the times I run, and while I have a specific target time in the back of my head, I just try to do my best at the moment.”

Fortunately, her high school coach, Maritza Coetzee, will also be moving to Tuks next year, so their successful relationship is set to continue, and overall, Zeney says she is just enjoying her athletics. “We have a great SA team at the moment, all supporting each other, and it’s wonderful to have the country behind us as well. It’s also great to see our juniors achieving as much as the seniors, and it’s just a great time for South African athletics.”