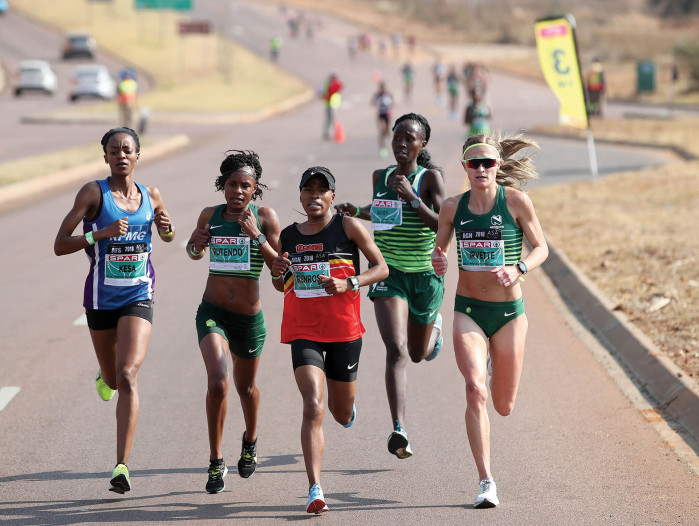 With a possible win in the 2018 Spar Women’s Challenge Series Grand Prix on the horizon, Glenrose Xaba has been putting her incredible form of 2018 to good use! – BY MANFRED SEIDLER

While being naturally quiet and often times appearing shy, there is steel in the diminutive figure of Glenrose Xaba, and her racing results in 2018 are evidence of that. On the road, she finished second in the first three Spar Women’s Challenge 10km races in Cape Town, PE and Durban, then won the fourth leg in Pretoria, catapulting her to the top of the leaderboard, with two races remaining. She also won the Totalsports Women’s 10km Durban, and placed second in the Totalsports Women’s 10km Johannesburg.

Unfortunately, she was disqualified along with four other athletes in the Pietermaritzburg leg of the Spar series in August after they mistakenly followed the lead car instead of the lead bicycle around a section where the car could not go, and thus ran the wrong, short course. This has thrown the Grand Prix competition wide open with one race to go in Johannesburg in October, so there will be everything to race for then. Meanwhile, Glenrose is quietly pursuing her goal of dominating the 10km on the road.

“I am only 23 and will not attempt a half marathon until I am 27. I may do the occasional 15km, but my focus is cross country and the 10km,” she says. “I will do the occasional track event, but there are not really many track races I can run. So the goal for this year is winning the Spar Grand Prix Series, and I want to break my PB of 33:21 at the FNB Durban 10km CITYSURFRUN in October. Hopefully there I can get under 33 minutes.”

TALENT SPOTTED
Glenrose has been bubbling just under the proverbial surface for the last few years, and considers 2018 her big breakthrough. “This year has been good. I have been able to run so well because of my foundation of 2017, where I was able to do a good base after coming off an injury. Also joining Michael Seme’s training group in 2016 made a big difference.”

She met Michael while competing in Mpumalanga. “He convinced me to come to Pretoria and join his group after finishing matric in 2015. He said I had potential and would like to coach me, so I moved. I trained with guys most of the time, which made a big difference, and I am now the only woman in the group, which is led by Lesego (Stephen Mokoka). Michael left us in November 2017 to take up a contract in KZN, but he still sends us our programme, and Violet (Raseboya – the wife of Caster Semenya) helps with overseeing the training sessions for me.”

BREAKTHROUGH BEGINS
In February this year, Glenrose really made the middle distance community in South Africa sit up and take notice when she clocked an astonishing 32:59.05 in the 10,000m at the Athletics Gauteng North Championships. She covered the 25 laps at an average pace of 79sec/lap, or 3:30/km, for the further-fastest time by a South African woman – only Elana Meyer (SA Record 30:52.51), Colleen De Reuck (31:56.00) and Dominique Scott (31:51.47) have ever gone faster.

While this performance was run in a mixed race featuring both men and women, this should not detract from the performance itself, but Glenrose herself says she had not expected to break 33 minutes on the track so soon. “I knew I was in shape after some of my time trials, but I didn’t expect such a good time.” The following day, she time-trialed to a win in the 5000m as well, clocking 16:39.44, a mere four seconds off her PB of 16:35.36.

Meanwhile, she was also continuing to do well in cross country. “I did not compete at the SA Track Champs as I was in Algeria competing at the Africa Cross Country Championships. It did not go as well there as I had hoped, though, as I didn’t have the correct shoes.” She finished 20th and second South African, but that may have just been a blip on the radar for her, because she clearly has an affinity for the off road discipline. She won the SA Junior title in 2011 and two years later the SA Senior title. In 2014 Glenrose had to settle for fifth place at the SA’s, but went on to win the trials in 2015, was second again in 2016 and then won another title in 2017.

LOOKING AHEAD
She may be known as a runner, but Glenrose is not just focused on running and is already thinking about long-term planning. “I need something for when my running career is over, so I am studying electrical engineering at Mamelodi Tshwane College. I am in my third and final year, and once I have completed this year, I will look to further my studies.” Meanwhile, all indications are that given the right opportunities and support, Glenrose could still do way better than her current 10,000m and 10km bests. The talent is there to be used.