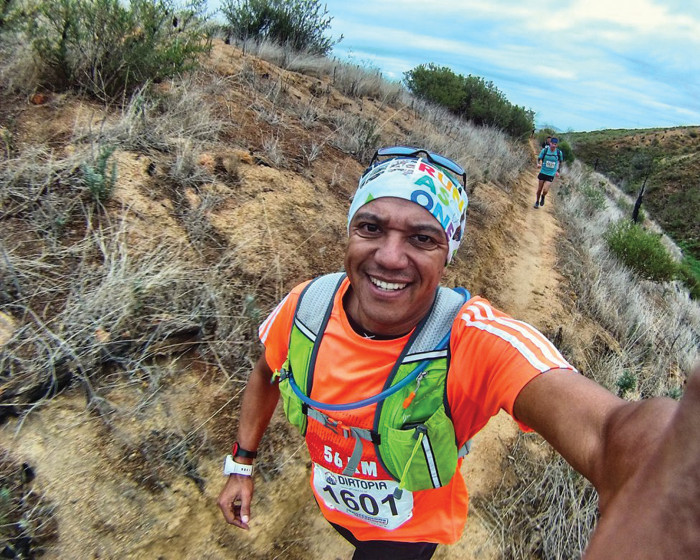 With camera in hand, Hassiem Fisher loves exploring the trails around Cape Town and revelling in the joy that running gives him, but it wasn’t so long ago that he was not able to run at all. – BY PJ MOSES

Hassiem loved his running when he was growing up. As in, really loved it. “I would easily run from our house in the Athlone area to Cape Town just for the fun of it,” he says, followed by one of his trademark beaming smiles. But then the twinkle in his eye disappears momentarily as he recounts how severe asthma brought his running to an end just two years after he finished school. “My running days seemed to be over and it depressed me,” he admits.

As the years went by, the former high school track star had to be content with rather playing golf when he wasn’t throwing himself into his work. “I became a bit of a workaholic, but that love of running was always there. My kids laughed at me in later years when I would hoot at runners in the road and cheer them on. I just missed being one of those people.” Then the twinkle returns to his eye as he tells how years later, he replaced his regular asthma medicine and suddenly found that he was able to run again. “I was so happy to be running again that I used to take turns on all the treadmills at my gym, because you could only run on each one for twenty minutes at a time!”

In August 2014 he joined the Itheko AC running club, and with guidance from senior members like Farouk Meyer and Nezaam Mohammed, he threw himself back into the world of running with renewed gusto. “By the end of 2015 I was determined to qualify for the Two Oceans and Comrades, which I did at the Winelands Marathon, after failing at the Cape Town Marathon. I was very fortunate that my wife Zubeida was very supportive and would accompany me to races and to training runs. Without her help I would not have been able to chase my running dreams. I also decided to run Oceans and Comrades in memory of my parents, because it was my Dad who told me that I could do these races one day when we watched it on the telly.”

A WHOLE NEW WORLD
With the two legendary ultras in the bag, Hassiem shifted his focus to trail after clubmates Ashraf and Roldah Orrie introduced him to off-road racing. “I grew up looking at that big mountain from the Cape Flats, and it was always a strange and almost scary place, but after giving trail a go at the Spur series, I didn’t hesitate to explore more.” That saw him turn 2017 into the year of ticking off one trail running bucket list item after another, including the three-day AfricanX Trailrun, the 50km Three Peaks Challenge, and the Ultra Trail Cape Town 65km. This year he has already added a second AfricanX medal, and one from the Bastille race in Franschhoek, and in August he ran more than half of the gruelling 80km PufFer while seconding his friend Ashraf Mallick.

He has also become quite adept at capturing all his adventures and sharing the pics on social media. “When I was competing back in high school, there were no photographers to capture my triumphs, and I want to be the one now who does that for me, and for many others who share this joy of running with me. I find that social media is the perfect platform for sharing your running passion. It gives you the opportunity to show people that there is more to life than sitting on a couch, plus I get a chance to highlight the beauty of Cape Town.”

A REASON TO RUN
A deeply spiritual man, Hassiem tries to give back as much as he can to worthy causes and uses his running as a way to raise awareness and much-needed funds for charity initiatives like the Muscular Dystrophy Foundation. Recently he also signed on as a Running4Pads ambassador, to help supply sanitary pads to underprivileged schoolgirls. “As a family man, it is important to get involved in issues that affect society, and not just focus on your own life. Our ability to run and our health is bestowed on us by the grace of the Creator, so using these blessings to do some good is the least I can do.”

He also says that the running community has become a big part of his life and he loves being surrounded by so many people who add value to it. “We all have a reason why we started running, but for many other people it is easier to make an excuse and not even try. My advice is to go and join a club or a training group today, and overcome that fear of change, because running will take you to a happy place, and make you a more balanced person capable of doing amazing things. My belief is that you must live for today, because ‘Yesterday is history and tomorrow is somebody else’s worry.’