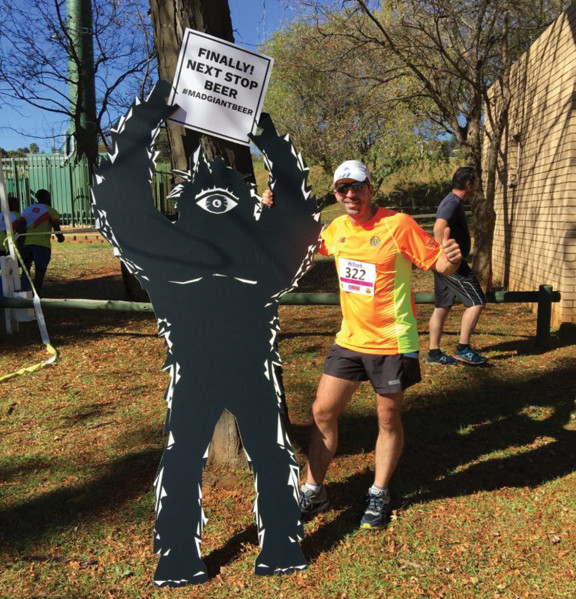 The Running Mann – By Stuart Mann

Some weeks back I was all set for my ninth Comrades, and I wasn’t planning to conclude my Comrades taper with my first adventure race. I was planning to be a sensible ultra marathon runner! But then Phuti replied to my tweet…

In Mid-May I was invited to do the Media Pre-run of the Jozi Urban Run Adventure, or JURA, as it is known, and I then posted a few of my photos on Twitter – and this is where Phuti comes in. Her seemingly innocuous reply to my Tweet, “These are the kind of things that I will be doing after Comrades,” was the gentle nudge that disturbed the delicate balance in my prefrontal cortex.

One thing you should know about many Comrades runners is that they love to finish Comrades, and talk about Comrades, but it’s only the masochists and psychotically challenged who actually love running the damn thing! So, the week before Comrades, you are a bundle of nerves, violently oscillating between excitement and dread, and many Comrades runners secretly hope for a valid excuse to avoid 12 hours of pain on the second Sunday in June.

I won’t deny some part of me thought that if I broke an ankle or fell on my head at the JURA, I would be able to escape my annual bout of Comrades anguish and mental torture, so there may be a myriad of deep-rooted subconscious psychological reasons for doing my first adventure race the week before Comrades – but it’s simpler to just blame Phuti!

Comrades Mentality
When it comes to tapering for Comrades, I normally go cold turkey, but this year I was trying to be more diligent to prevent my muscles from going into atrophy. I wanted to run about 18-20km to round off my training, and the JURA has 6km and 12km options. I therefore went for the 12km option, but this still left me 6km short. Fortunately I have an old school friend, David, who lives 3km from the start in Marks Park in Emmarentia, so with a 3km warm-up and warm-down, he was the logical choice to join me on this adventure.

Some people will tell you that it’s very easy to know if someone has run Comrades – because they’ll tell you. This is a terrible stereotype, because many of us are far too modest to go around bragging about running the greatest ultra on the planet. No, we use more subtle methods to show off our accomplishments… like a puffed-up chest inside a Comrades race shirt. This made the choice of attire for my first adventure race easy – the only complication was which Comrades shirt to wear. I eventually decided on the understated luminous orange 2015 edition, but not wanting to rub it in the faces of the recreational runners, I went for a neutral cap.

The Red Mist
To prevent congestion on the route, there are batch starts, and we’d been slotted into Batch H for an 8:40am start – perfect for a bit of lie-in, and also provided the sun with enough time to take the chill out of the winter air. David and I watched a few batches set off with a sack race before disappearing into the Johannesburg wilderness, while a couple of announcers, cheer leaders and dancers made for a vibey and entertaining atmosphere at the start.

Soon enough it was our turn and we lined up at the back of our batch. David is a man of integrity and religion, soft-spoken and mild-mannered, but when that gun fires the red mist comes down and his competitive side brutally erupts. David showed Batch H his immaculate sack-racing skills, powering to the front and demolishing all those who got in his way. If I was going to get injured during the JURA, I didn’t want it to be at the first challenge, so I was more dainty in my approach – but I did make a mental note that David would be a good shopping companion for future Black Friday sales!

The entire course is urban trail along the Braamfontein Spruit. If you want to see the natural beauty of Johannesburg – no, that’s not an oxymoron – this is the best way to do it. There are also quite a few inflatable obstacles, which proved to be very entertaining, but we both have young daughters, and with that comes significant “jumping castle” experience, so we bounced over these obstacles with ease. I was also grateful for an opportunity to rest my feet for a short while as I crossed the monkey bars.

Fit and Ready
And after all that, the good news for my Comrades medal count (and bad news for my legs) was that I didn’t manage to get injured, and therefore had to join 20,000 other idiots at the Comrades start line the following Sunday.

ABOUT THE AUTHOR
Stuart’s lifetime goal is to attract a beer sponsor with his running blogs, but he will settle for a travel sponsor so that he can run more races and share their stories. Read his full blogs at http://runningmann.co.za, and follow him @runningmann100.