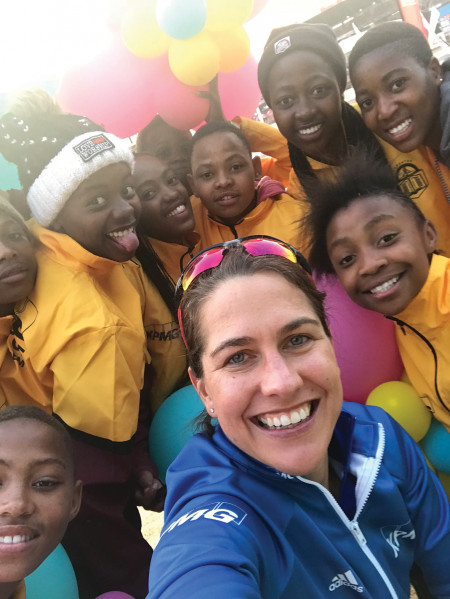 I had the privilege of celebrating Women’s Month by spending it in fine style with more than a dozen special women in my life!

Running, racing and appreciating this beautiful month with fellow females all over South Africa makes August a beautiful month. I also appreciate the fact that I’m able to travel the country again to take part in races, spending quality ‘sister-time’ with Christine, and enjoying a full night’s sleep (without my daughter Karli), where not even race day nerves can wake me up at night!

My journey back to full fitness over the past year after the injury and my pregnancy, has been quite a rollercoaster ride, filled with many ups and downs and a lot of mixed emotions. What I have learnt over the past year is to really appreciate my health and mobility, and not to compare myself to the younger, fitter and faster René I used to be. I have also learnt to enjoy the small victories along this new journey of running while being a working mom, and that includes being selected to represent Central Gauteng at the SA 21km Champs in PE in July. I can’t even remember when last I wore the red and black CGA vest, but I was very proud and excited to represent my province again.

Friendly Rivalry
After a running career of more than two decades, I have also come to realise that running is actually not an individual sport. In the past, I would never have discussed my race goal and strategy with a fellow competitor, but that has recently changed, as I have experienced the value of working together as a team to achieve individual goals. For example, on the start line in PE I told my KPMG teammate Stella Marais (running for Gauteng North) what my goal was and we decided to work together. Then 1km into the race we caught up with Anel Terblanche, another KPMG teammate who was running for Western Province and told her what our goal was. It was similar to her goal, so she too joined the pack.

Stride for stride we ran together, handing each other water sachets at the water tables and chasing down the girls in front of us. At the end, Stella sneaked into the top 10, I finished 11th and Anel 12th. It was celebrations all round on the finish line, with Stella and Anel crushing their PB’s by more than two minutes. I was also impressed with my sub-80min, which was my best 21km time in more than two years. The KPMG team was also over the moon with Christine’s great podium finish, as she claimed third place in 1:15:34.

Girls’ Day Out
Next stop was the fourth leg of the Spar Grand Prix series in Pretoria, always a highlight on the running calendar. This time around I arranged with 20 girls from the Vorentoe High School to join me for the race in Centurion, and what a festive experience it was! Andre was the bus driver for a big group of the girls and it was great seeing the girls playing DJ and jamming to their favourite tunes while travelling to the race. Meanwhile, in my car I had to answer questions on life, love and even some more difficult questions on boyfriends, future husbands and parenthood. It made me realise the innocence of their youth, but it was great to listen to the girls’ stories.

In the race, I finished 20th in a time of 38 minutes and was very happy to be back in the top 20. What made the day more special, however, was the time spent at the stadium with the Vorentoe girls after the race. They really had a great time dancing to Denim, sliding down the grass embankments on cardboard boxes, and generally just having a ball. The balloons were also a big hit and we had to take LOTS of them back to Johannesburg to decorate their rooms back at the school.

We finished the day with a McDonalds burger, Coke and Ice-cream – the way Women’s Month should be celebrated – and both the girls and I are already looking forward to the final Spar Women’s Race at Marks Park in Johannesburg in October! I am thankful once again for Spar, for inspiring and supporting women in general by getting thousands of women, young and old, to do some exercise while spending time with precious friends. #GirlPower