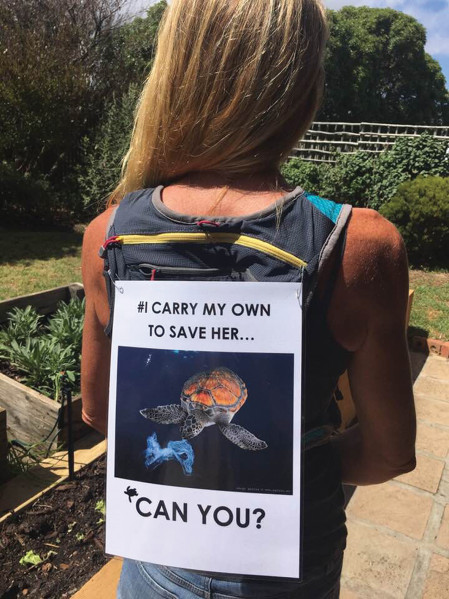 When it comes to setting goals, most runners aim for a specific race, time or medal, but Karoline Hanks has a different goal, to convince runners to think about their use of single-use plastic sachets in road races. Karoline and her team have been trying to rather develop a sachet-free hydration system, so that more single-use plastic doesn’t end up in the wetlands, rivers and oceans. – BY SEAN FALCONER

It all started in April 2013 when Karoline went for a run on Chapman’s Peak a few days after the Old Mutual Two Oceans Marathon. “It was a very windy race that year and when I looked down on the verges next to the road, I just saw a whole lot of plastic sachets, so I went down and started cleaning up, but soon realised I had a bigger job on my hands. I went home, got some bags and filled up three and a half bags of sachets, plastic bottles and polystyrene peaks. It was all still there three days after the clean-up crew had been through, and that made me really angry.”

“When I got home I did a bit of research and realised it was just part of a much bigger problem, because road races happen all over the place, and this pollution happens every weekend! So I wrote an article that night, still filled with all that rage, and it was published verbatim in the Cape Times. The very day the article was published, I received a call from the then Two Oceans race director, who asked if they could talk to me, and I went into that meeting with a couple of the bags of rubbish I had collected. Halfway through the discussion, I put the bags on the table and told them that it was unacceptable.”

CAUSE FOR CONCERN
Having grown up with parents who worked in conservation, Karoline has always been passionate about the environment, both in her work in the media and now through her business, SUPA (Single Use Plastic Alternatives), producing home-made environmentally-friendly products. That’s why she has worked tirelessly since 2013 to try get the running community to change its littering ways, but she concedes that her efforts initially focused unfairly just on the Two Oceans, notably receiving wide coverage when she shared pics on social media of the race waste she cleared from the route after the clean-up crews were supposed to have cleared it away.

“I know I have taken a few digs at Two Oceans over the years, and I realise down the line it was perhaps a bit disingenuous of me, that it would have been better to get into positive dialogue with them, but thankfully the relationship has improved a lot since 2017, leading to regular meetings and real efforts to clean up the race. Those meetings in turn led to an amazing workshop at the Sport Science Institute, with Western Province Athletics, Two Oceans, running clubs, journo’s and sports scientists involved. There’s also been a huge increase in awareness, thanks to campaigns such as Modern Athlete’s #runclean, and turning sachets into desks through the #GoGreen campaign.”

CARRYING SOLUTION
Karoline believes the best option is to get rid of sachets completely. The #icarrymyown campaign calls on runners to carry their own water in hydration packs or hand-held bottles. “I started carrying my own water in 2014, with a pic of a turtle swallowing a plastic bag pinned to my hydration pack. Unbelievably, one runner actually said to me, ‘What a pretty picture!’ It’s a slow process to convince runners to change, but I think it has received a positive response, and I want to highlight the efforts of my co-campaigner Kim Walker, who also came up with the campaign byline and logo.”

One of the big success stories of the campaign has been the introduction of refill stations in several races in the Cape, where runners carrying their own hydration containers can refill mid-race. “These amazing hydration stations were built by Richard Sutton, and they’re basically a framework of tanks, pipes and taps that he rolled out at his own races, the Milkwood and Chappies Challenge half marathons. He’s the first race organiser to say no sachets in his races, and it’s been phenomenally successful,” says Karoline.

So far this year the refill stations have been used at the Red Hill and Peninsula Marathons, the Safari Half Marathon and Two Oceans itself, with runners told via social media where they can stop for a quick, easy refill thanks to the imported high-pressure taps Richard has used. “I ran some of those races, and if anything, I actually saved time by stopping to refill while avoiding the jams at all the sachet stations. It also felt good to say no thanks to all that plastic!” says Karoline. “Now more race organisers are approaching us to ask for the refill stations at their races, and that’s great news, because it’s important that we reduce the demand for single-use plastic in the road running space. It’s a simple hydration issue for runners, but the impact is that this stuff ends up leaking into our natural ecosystem, is ingested by wildlife and is ultimately entering the food chain – which has massive health implications for all of us.”