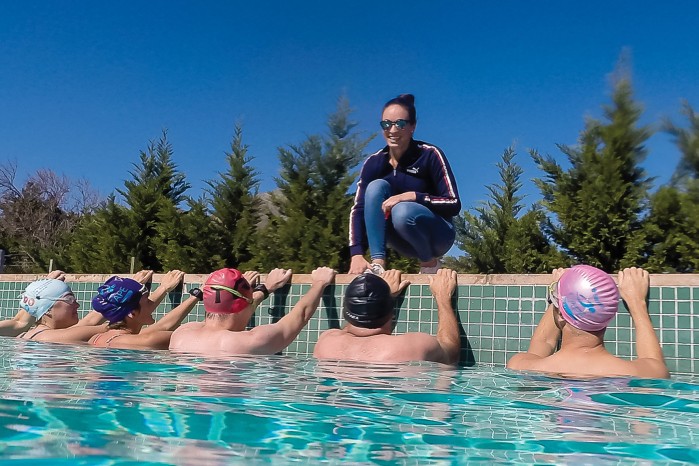 It takes a special type of athlete to race flat-out in five separate endurance sports events in seven days, but that’s what the annual Momentum BIG5 Challenge demands, and former pro triathlete Vicky van der Merwe is a master at it. – BY SEAN FALCONER

The Momentum BIG5 Challenge forms part of the annual Pick n Pay Knysna Oyster Festival in the first week of July, and athletes must complete the Knysna Cycle Tour 80km MTB, the Knysna Lagoon Mile Swim, the Featherbed 15km Trail Run, the MTBX Cyclo-Cross, and the Knysna Half Marathon, with the smallest accumulated time determining the winners. It’s a grueling multisport event that only a few hundred athletes are able to take on, and one of the best is 28-year-old Stellenbosch-based Vicky van der Merwe. Having won the title in 2017, she retained the title by coming home in an accumulated time of 8:20:54, ahead of second-placed Fienie Barnard (8:34:23).

In the first event, the MTB, strong rider Fienie established a significant lead as Vicky finished 10th overall and second of the Big5 entrants, but Vicky then made up time by winning the trail run overall and finishing second overall in the swim and MTBX (again behind Fienie). “The 80km MTB is always the toughest for me, as there are other girls who are much stronger on the bike, so I was pleased to finish 10 minutes faster than last year. My MTBX race was also faster,” says Vicky.

That saw her line up for the final event, the half marathon, with a seven-minute lead, and she could therefore run a fairly relaxed race, in stark contrast to 2017. “Last year I was only lying fourth going into the run, with a massive deficit of nearly 20 minutes to first place in the Big5, so I had to run really hard to win the title.” Nevertheless, she still won the half marathon overall and took the BIG5 by nearly 14 minutes. “Overall, it was an awesome, challenging week, and topping it off with a win in the half marathon was great. The thing about the BIG5 is that you are never certain of a win until the last day, as anything can go wrong, and you have to pace yourself.”

Tri Success
Vicky was a strong swimmer in primary school, then took up running when she began high school in Stellenbosch. Soon she was talked into giving triathlon a try, and success followed. “I won the Western Province Champs when I was 15, then went to the SA Champs and came out of the water second, but finished the bike leg stone last. I ran like crazy and caught them all again to finish second in the under-23 category.” That saw her selected for the SA team for the World Champs in Japan, where she finished 60th. “I had a good swim and run, but again got dropped on the bike, and I realised I needed to work on my bike. After working with a cycling coach in Germany, I finished 14th at the next World Champs, in Switzerland.”

After claiming three junior World Titles in biathle, qualifying for five consecutive World Triathlon Championships as well as racing on the international pro circuit, Vicky’s tri career was unfortunately disrupted for several frustrating years by stress fractures in the shin and the hip as well as glandular fever. In spite of successful hip surgery in 2014, she is no longer racing professionally, but hasn’t lost her competitive nature. “Triathlon is still my focus, but I select my races carefully, and the professional racing phase of my career is now behind me. I run half as much as I used to, doing more quality than quantity, and more gym work, and I believe I have now found what works for me, because I am actually racing better now!”

Coach Vicky
These days Vicky is perhaps better known as a coach, thanks to the work she is doing with her Stellenbosch Triathlon Squad. “When I came home after competing on the world circuit, I had to decide between going into law, which I had studied, or continuing in triathlon. I had such a great support structure here in Stellenbosch when I began my tri career, so I decided to create a structure to help others to achieve their goals, and in November 2014 I began with just 15 athletes, but it quickly grew. I’d done a few coaching courses, but had also learnt a lot from my high performance background, and could apply that knowledge and experience.”

“We are now about 200 athletes, ranging from World Champions Flora Duffy and Brad Weiss to complete beginners, with 17 training sessions a week, including lunchtime swim and run groups, and a junior group just starting up. I now have Cobus Fourie working with me, and another coach coming on board soon, and the focus is on group work, but athletes can ask for personalised programmes. Stellenbosch provides such a great training environment, and I have received great support from the sporting community, so this is a very rewarding job, and I love what I do!”

To Find out more about Vicky's tri squad, go to https://triathlonsquad.co.za