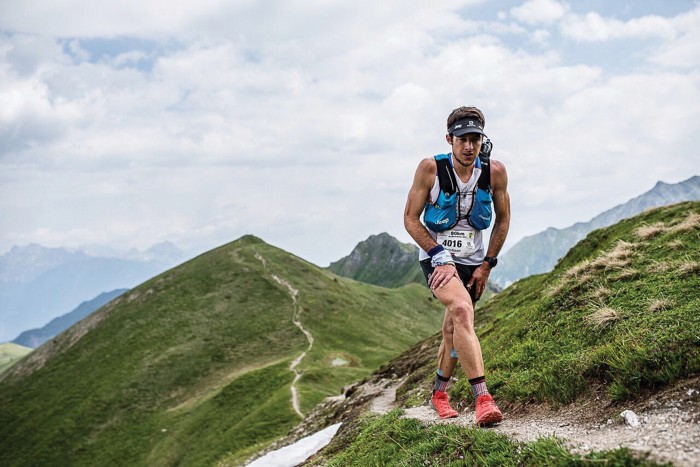 Young Christopher Greyling made his appearance towards the end of September, entering the world with a certain amount of expectation on his shoulders. After all, his parents, Landie and Christiaan Greyling, are pretty much considered royalty in South African trail running circles. – BY SEAN FALCONER

Having both represented South Africa in World Champs events, and having both won an impressive number of events, including the prestigious Otter Trail Marathon, it comes as no surprise that much is expected of Landie and Christiaan’s child. “Everyone keeps telling us that they expect him to be a real running superstar with our combined genes, but we want him to choose what he likes,” says Christiaan. “He doesn’t need to be a runner, but we will expose him to the mountains and outdoor activities, because we believe that what you’re exposed to when you’re young will affect what you love when you’re older.”

Landie says the pregnancy was not exactly 100% planned, although they had been talking about starting a family sometime in the near future, given that they are now both in their early 30s. “I picked up an injury last year and it was quite funny how many people suddenly started suggesting that it was perfect timing to have a baby, since I wasn’t running anyway. We actually considered it and I went to see the doctor about the steps to take, but in the meantime I had started running again, so we decided to cancel the appointments and first do some projects, like our Lesotho Crossing in March 2018… but then I found out on 14 February that I was already nine weeks pregnant.”

Landie still managed to get some racing in earlier this year, even finishing on the podium a few times as she began to regain fitness, and she continued running throughout her pregnancy, still averaging around 60km a week at seven months. “My running has just been slow and controlled of late, because I listened to my body, and gymming three times a week also helped, but I finally had to revert to women’s push-ups, because the weight was getting too much for my arms!” she laughs.

COACHING CREDENTIALS
Naturally, falling pregnant has forced this elite running couple to change their plans, but Christiaan jokes that it has actually proven a lucrative time for their careers, and for their recently launched coaching business, Alpas* Fit. “More people like our posts on social media now that we’re pregnant, so we see this as a great marketing opportunity!” But jokes aside, he says they are enjoying putting all their experience to use as coaches. “People know our reputation as runners, which helps attract new clients, even though we’re not advertising that much yet.”

The two are actually still getting used to this new coaching role, given that neither of them foresaw a full-time career in running until recently. As Landie explains, “I studied to become a chartered accountant and intended to go into the corporate world, but then I discovered this adventurous world of running. Initially I was working and lecturing on top of running, but now that we’ve started the coaching business, which is quickly expanding into other things, there just isn’t time to get back into full-time work. So that’s on hold for now.”

Similarly, Christiaan studied engineering and until recently was working full-time. Then his running really took off, and he also turned pro. “For years I was always there, taking part and picking up experience, and I always tried to win, but my first year of racing was the year of placing 12 over and over. The second year was about injury, the third year of placing top 10, and the fourth year I always seemed to finish fourth! Then I started training with Landie and I think that helped me improve to earning podium positions, and then I was inspired to start winning races.”

RUNNING MATCH
Training together is actually how these two got to know each other in 2008 while at varsity in Pretoria. They first met, briefly, at an adventure racing event in the Magaliesberg, says Landie. “I was in a team with two friends, while Christiaan was in another team. After the race, we all hung out for a while, but I only spoke to him for about three minutes. A week later I went to a trail race and accidentally drove the wrong way up a one-way road, and suddenly there was a bakkie in front of me, hooting and flashing its lights, so I pulled over to let it go past. When I parked, the same bakkie pulled up next to me, so I pretended to scratch around in my car, because I was so embarrassed, but then there was a knock on my window, and the bakkie driver was Christiaan!”

“After that trail run, he asked me out for an ice-cream, but I said let’s rather go for a run, because I told him I was looking for somebody to train with. The next day he phoned me to invite me to join his training group, but I later found out he actually just got a bunch of friends from his ‘koshuis’ to join him for a few early morning runs. One by one they disappeared until it was just us two!” Christiaan just smiles as he admits that “it was the most running I had ever done in my life.”

They’ve now been together for just over 10 years, and in that time they’ve enjoyed many running highs together, including winning the mixed pairs category at events such as the AfricanX Trailrun, SOX, Dryland Traverse Tankwa Trail and the Riano in Spain. They also finished second in the eight-day TransAlps between Germany and Italy in 2015, and Christiaan says they have unfinished business there. “Finishing second in a very strong field was incredible, but we want to go back after our baby arrives, because the couple that won in 2015 had a one-year-old!”

Another great double act was both being selected for the SA Team to the World Ultra Running Champs in Wales in 2013, where Landie was our first female finisher in ninth place, while Christiaan was our first man home in 32nd position. She had also been to the World Short Distance Champs in Italy the previous year, while he also made the SA Team for the World Long Distance Mountain Champs in Slovenia in 2014, but Landie says it was really special to represent SA together in Wales. “It was a really proud moment for both of us.”

Individually, they’ve also both racked up impressive lists of wins, with both winning at the Skyrun and Ultra Trail Cape Town events in SA, but when asked for their standout run, both choose the Otter Marathon as their highlight. “For me it was because I tried for so many years to get that win under my belt,” says Christiaan, while Landie adds, “I won it in 2014, but my 2013 run was better, even though I finished second. Being the first South African woman to break that magical five-hour barrier was huge, because nobody knew if it could actually be done.”

BABYSITTING DUTY
Looking ahead, the couple are already thinking about how to plan racing around the new arrival, but Landie says they will simply take turns with babysitting when necessary. “Luckily our families have been very supportive through the years, attending many of our races, so we should have somebody available to look after the little one to allow us to keep racing.” At that comment, Christiaan breaks out laughing, then says, “Perhaps we should place an ad in Modern Athlete for a babysitter at races. Ideally that person can do sports massage as well… Not too much to ask!”

* Alpas is a Filipino word that means ‘to break free from the old into the new.’ You can find out more at www.alpasfit.com.