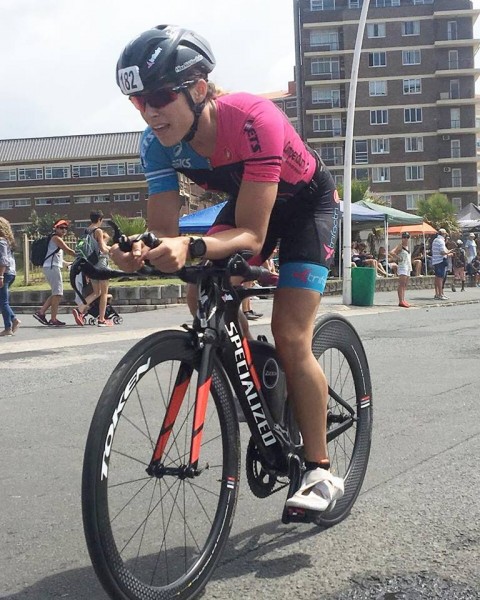 Ultra-distance triathlete Jade Nicole is not just making a name for herself in the sport, she is ready to take on the world’s best in the hopes of pursuing a pro career in triathlon. – BY SEAN FALCONER

The right mindset. That’s what Jade Nicole (28) says was missing when she went to Europe aged 18 to become a pro cyclist. “Cycling started out as a hobby during school in Cape Town, but soon I was racing the top girls and signed by the Konica-Minolta team, riding the big races like the Cycle Tour and 947. Then I went to Europe, and honestly, I really missed my family and friends, and the comforts of home. I was living in a team house with 10 other riders and it was a lot more difficult to get into the pro team, and after three years I realised I wouldn’t make it.”

Fast-forward a few years and Jade is once again making a name for herself on the sporting front. Now living in Johannesburg, she won the recent MiWayLife Sun City Ultra triathlon (1.9km/90km/21km), having finished first in her age group and eighth overall at the Standard Bank Ironman SA 70.3 in East London earlier this year, as well as well as first in her age group and second overall at the MiWayLife Durban Ultra. Those great results followed overall wins in 2017 at the Durban 70.3 and Indian Ocean Triathlon in Mauritius, and a first in age group and seventh overall in the 2017 Ironman SA 70.3. And she says it is largely thanks to her coach, Lucie Zelenkova.

“Sun City was not my best race, but I pulled a rabbit out of the hat after being two minutes down on Magda Nieuwoudt at T2. Somehow I passed her on the second lap of the run and ended up beating her by nearly seven minutes. I had been sick the week before the race and still wasn’t feeling great, but I had one of my best runs that day – and I must give credit to Lucie for helping me develop the mindset that now allows me to race so successfully. I wish I had this mindset eight years ago in Europe – I could have achieved so much more, but I didn’t believe in myself as much.”

A Second Chance
Jade had actually done a few triathlons while in school, but says she struggled with the swimming. With her cycling days behind her, and having initially trained as a chef upon her return to SA and worked in that field for four years before training to become a personal trainer, she decided to give triathlon a go again in 2015 when a client invited her to a tri event. Her initial results were competitive but not top level, so in 2016 she decided to take things more seriously and signed up with Lucie’s Trifactri squad. “I’ve always been inspired by her, having watched her race and win in East London when I was young,” says Jade.

“I now have a coach who has raced all around the world, who’s been there and done it, and I love that she is very hands-on and supportive. We have regular meetings to ensure I am focused, while avoiding over-training, and I trust the process, and that Lucie will get me there. She is always open and honest with me, and she has said a lot of things that make me confident about the future, including possibly turning pro. Still, we’re both being realistic, and I first need to see how I do against the world’s best before I can even start thinking about trying to make a living from triathlon.”

Bring on the Best
Of course, the chance to test herself against the world’s best triathletes is just around the corner. Having won her age group in East London earlier this year, Jade qualified for the Ironman 70.3 World Champs, which will take place in Port Elizabeth on 1 September. “My goal is to win my age group at World Champs, and then, if things go well, to turn professional and represent my country at an international level. The World’s best are coming to SA and it will be my first international race, so a good indication to see where I stand on the world stage. I need to be able to make money if I turn pro, so I’ll be comparing times when they are here.”

Happily for Jade, her motivation to succeed is strong enough to overcome any doubts, especially when she thinks bout her decision to cut back on her work hours in the Virgin Active Classic Collection gymnasium at Alice Lane in Sandton, in order to train for World Champs. “I am currently only working half-day, and have sacrificed my morning working hours – and pay – to fit in training from 4:30am to 12, before I see clients in the afternoon and evening. But I am motivated and looking forward to the challenge.”

STOP PRESS: Since this article was written, Jade went on to win her age category at the Ironman 70.3 World Champs in PE… which means chances are good she will be turning pro in the near future!