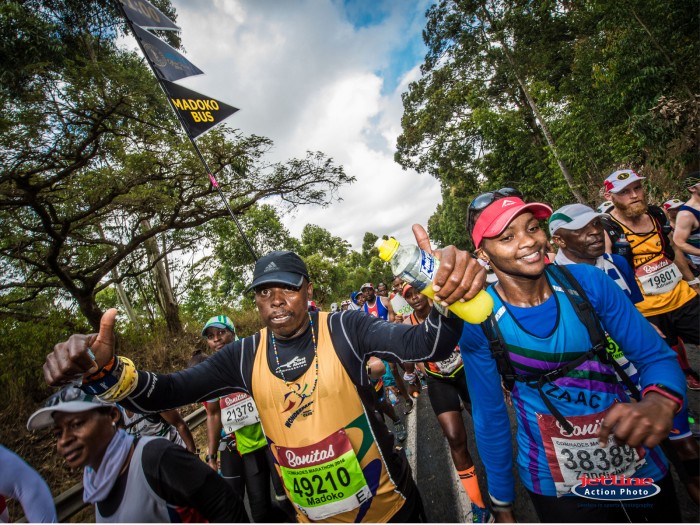 They come running into the finish line, chanting, dancing, big smiles on faces, obviously having a whale of a time even though they’re tired, sweaty and sore. On the one hand, they’re relieved to be finishing, and ecstatic to have hit their target time, but on the other hand they don’t want the race to end, because they’re having so much fun! These are the passengers of Madoko’s Bus, driven by legendary pacesetter and coach Madoko Ndhlovu. – BY SEAN FALCONER

With his distinctive singing, chanting and even some dancing, well known pacesetter Madoko Ndhlovu has his bus passengers hanging on his every word as they follow him home in races. “At the beginning I tell them, I am Coach Madoko, I am your driver today, and I am going to change the way you run, talk and smile. I want them to know what to expect from their driver, right from the first kilometre, and then it’s tuck in your stomach and heel to toe!” says Madoko. He also teaches his passengers a few songs and chants, including what has become known as Madoko’s Anthem, Morena re hauhele (a Sotho hymn, which translates to Lord have mercy on me). “When it is tough out there on the road, I start humming the song, and the people just hum along. But when it’s going good, we sing and chant, and people like the vibey atmosphere.”

Unsurprisingly, Madoko’s buses attract a lot of passengers, but he says, “I’m not worried about the size of the bus, I’m worried about how people will finish the race, so I make sure that even the person right at the back of the bus gets the info. That’s also why I ask everybody to pick a partner and work together – they must know each other’s names, and motivate each other to keep going, like brothers in arms. I’ve seen people exchange telephone numbers after the race because they want to stay in touch after the incredible brotherhood of the bus. I also get people who have run Comrades for 20 years saying they have never enjoyed it more than when running with my bus, and that makes it all worthwhile.”

Leading the Way
Madoko (50) runs his own building construction company in Pretoria, having previously worked for Telkom for 20 years, and he is married, with two sons aged 26 and 19, both very talented soccer players. As a youngster, Madoko played volleyball, softball and soccer, but he started running in 2000 with his brother, who was working and running for Transnet, and that’s where he heard the guys talking about Comrades and decided to run it in 2001. “That was fun, something out of this world. I ran one of my best times that year, 8:40, but I also saw people were suffering due to inexperience, so the following year, by which time I had become chairman of the Telkom running club, I started training the members. That’s where my coaching and mentoring started,” he says.

Soon he was pacing clubmates in races to achieve target times or qualifiers, and in 2004 he unveiled his now famous Madoko Bus flag, so that any runners who wanted to stick with him could find him at races, and his buses became hugely popular. “I ran sub-4:00 buses at most of the marathons I was doing and delivered them all on time, but I realised the faster runners can often do it by themselves, whereas the slower runners need more help, so I moved to sub-5:00 to help others qualify for the big ultras.”

After he brought a huge unofficial sub-10:00 bus home at the 2005 Comrades, he was invited to become an official Comrades Pacesetter for the first time in 2006, and for the next few years he was a regular sub-10:00 Pacer. In 2011, however, he ran his 11th Comrades and it would be his last for five years, partly due to injury, but mostly due to the tragic death of his sister Abigail in a motorbike accident that December, which Madoko says hit him very hard. “She always supported me in my running, and she and my wife were my number one supporters. Coping with her loss, that took me three to four years. Fortunately, I was eventually motivated to come back to running by my wife and kids, and all my running friends who wanted me back on the road, so in 2015 I started running seriously again. People kept asking me when I will be back at Comrades, and in 2016 I ran it again.”

Back on Pace
Madoko went straight back to pacing at Comrades 2016 and brought his unofficial sub-11:00 bus home in 10:54:21, and that saw him brought back into the official Modern Athlete Comrades Pacesetter Programme in 2017. Now specialising in a sub-11:00 finish, he led his passengers over the line in 10:58:29, and this year repeated the feat with a 10:57:21 finish. He says that 2017 run really stands out as a highlight, not just for the incredible spirit in the group, but also thanks to one specific passenger in the bus.

“I was standing at the start of the 2017 race when a runner called Johan came up to me and said, ‘Madoko, you helped me run my first sub-nine in the 2008 Up Run, and now you are doing the sub-11:00 bus. Well, this is my wife Martie, and I want you to please assist her now, because she is doing her fifth Comrades and couldn’t finish either of her two previous Up Runs. I told her she must run with you and she will make it.’ Well, Martie then stuck right next to me the whole way!” says Madoko.

“We reached halfway in 5:30 and she turned to me and said, ‘Are you for real? I’ve never made the halfway cut-off before!’ Then as we reached the bottom of Polly Shortts, she asked me if I was going to keep my promise to get her up that hill. Well, when we reached the top, Martie was so overjoyed she stopped at the SABC TV camera for a quick interview. Then her phone rang, and it was her husband, telling her that he had just watched her on the big screen at the finish. She put the phone on speaker mode and we all heard her husband cheering her on while she just cried with joy and emotion.”

“I lost her in the crowd at the finish, but two months later I received a call from her. She said that she had been trying to track me down, so that she could thank me. She was so incredibly happy about finishing, and now every time I am asked for a motivational story about Comrades, I tell the Martie story. It proves that everybody can finish it! She had been unable to finish the Up Run, and then she ran a sub-11. It’s a mind game, that’s why I work with the runners’ minds right from the start.”

Coach and Mentor
Pacing is just one way Madoko is helping his fellow runners. Over the last few years he has also developed training camps to help novices get to the Comrades, and thus far he has a 98% finish rate amongst his trainees. “I just love to help others by sharing a winning formula, and it is all done from the heart, because I don’t ask people to pay me. I now have people coming from all over the country for my training camps, and I focus on the core, not only on running, because running is easier if you have a strong core. I was very pleased when a lady from Gugulethu in the Cape ran in my bus this year at Comrades and told me she got my training programme from my Coach Madoko Training Camp Facebook page –and that it really works! Again, that makes it all worthwhile.”