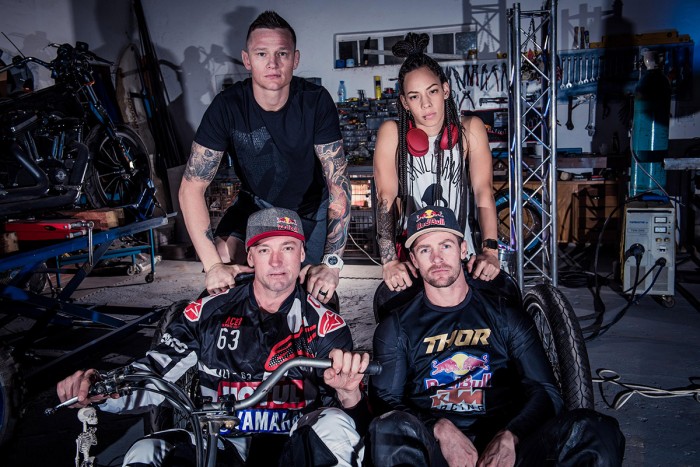 The ferocious construction of SKULLCANDY’s WAR RIG can be heard for miles across neighbourhoods as fierce war cries and screeching metal drilling pierce the air, the sounds echoing through the streets, scaring local bullies indoors and feral cats scuttle for cover. A sudden burst of thunderous hammering breaks nearby rocks into gravel, a reminder of what’s to come; the most brazen, kick-butt, battle-waging machine, a prodigy of Mad Max, the fierce, animalistic SKULLCANDY WAR RIG is ready to tear down Sandton Drive with all the ferocity of Imperator Furiosa in search of GLORY!

With nothing but gravity and gallons of mad bravado and Red Bull, the fearless pilots, Capper and Fitzgerald, shrugged off as mere misfits by their peers, will shake down the egos of those before them, instilling fear and confusion in those still to come. “CAN YOU FEEL IT?”

Come the 16th September, the posh, meek and mild must lock their doors and close the curtains as Sandton Drive will be taken over by hundreds of mad, thrill-seekers out to beat the fearsome War Rig Warriors, who, we might mention, are deeply indoctrinated in the belief that dying in battle will take them to Valhalla.

If you’re brave enough to cast your eye in the direction of these four apocalypse survivors, you can’t miss the brutish War Rig engineer, Martin van Staden, EFC Champion who chases his opponents around the ring until they slip over their spilt blood; the War Rig’s breakneck mechanic, Courtnaé Paul, a steely avenger with combat and tactical skills that will beat brawn at every break of dawn; then there’s the gung-ho co-pilot, Kerim Fitzgerald, the raging, fiercely competitive KTM warrior who thrives in hostile environments, living only for today, no price is too high to pay; and finally, the Chief of Five Wives, and of all citizens in Citadel, is kamikaze pilot, Brian Capper. He is dangerous on wheels, an extreme adrenaline junkie with pure savagery and rage surging through his veins, feeding fire through the steel and rubber of the War Rig, crushing all who attempt to outrun the War Rig in this deadly, high-speed chase through the concrete jungle.

Hold onto your wives, they are coming. YOU WILL #FEELIT….