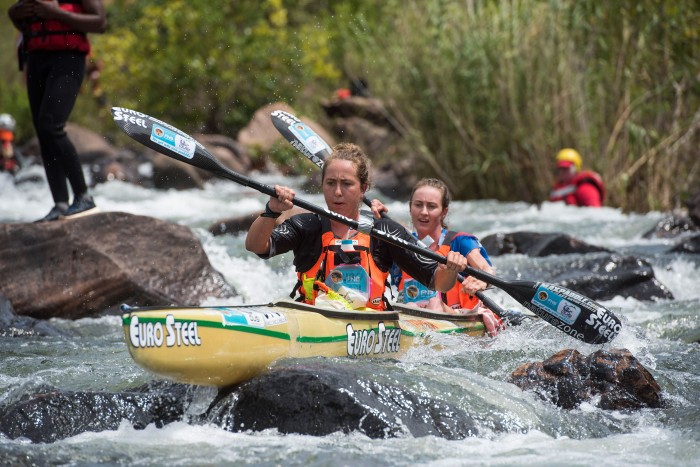 With a streak of race wins in trail running events, Cana Peek is making a name for herself in the sport, on top of already being a Dusi Canoe Marathon winner. As she explains, the two sports really do go together well. – BY SEAN FALCONER

The FNB Dusi Canoe Marathon covers just over 120km from Pietermaritzburg to Durban in KwaZulu-Natal each February, and some people joke that it is actually a running event with a bit of paddling thrown in. That’s because some rapids or weirs are too risky to shoot in the boats, or long loops can be cut out with an over-hill portage, so paddlers do at least 20km of running during the three-day event, with their boats on their shoulders.

It goes without saying that being a strong runner really helps, and that’s why 20-year-old Cana Peek has excelled in the Dusi. “I think running is a huge aspect of the race, especially for me. I don’t think I have a natural build for canoeing, because you need a lot of power and strength to push through the water, especially on the flat water and sprint sections. But being so light does benefit me in rocky waters, and more importantly, it means less muscle mass to carry when out of boat,” she says.

Paddling Prowess
Cana began paddling while attending Epworth High School in Pietermaritzburg, just a few kays from the Dusi starting point, and says it all started thanks to the annual Adventure the school offers. “One was to paddle around Mauritius, so I had to be fit enough to be chosen to go. I soon found that I was getting better at paddling, so I started doing races, and I also enjoyed the outdoor element far more than being on a hockey field or the squash court.”

That led to her doing her first Dusi in 2014, at the age of just 15. That year it was the K2 two-seater race, so she paddled with a schoolmate and they finished first in the under-18 girls’ category and seventh female team overall. The following year was a K1 race and Cana surprised everybody, herself included, by finishing second overall. In 2016 she partnered with Kyeta Purchase and they once again won the under-18 category as they finished third overall.

After skipping the 2017 race while taking a break from paddling, to begin her B.A. Sports Science degree at Stellenbosch University, Cana returned this year to partner her older sister Jordan (24), who was also studying at Maties, and they dominated the race from start to finish. “This was the first time we paddled the Dusi together, and just to go through all that experience, the training and the race, with my best friend and my role model was awesome. With a sister you can be absolutely blunt and honest, you shout at each other and you have to be tough, but the whole time there is banter and we keep each other entertained on the water.”

Running Talent
At the same time as getting into paddling, Cana also discovered a talent and love for running. “I did athletics from grade eight to grade 10, running the 1500m and 3000m and earning provincial colours, but I found the training on the track got a bit boring. I preferred running cross country, and in high school I ran every single race for Epworth in the inter-school league from grade eight to grade 12, and won every race. I was awarded school colours and became the school cross country captain.”

Now Cana has taken to trail running in a big way. At the time of writing, she had competed in nine trail races in 2018, and won them all, including the 24km event at the Jonkershoek Mountain Challenge in Stellenbosch and the first race of the Cape Winter Trail Series. “At both races, I was behind at the start, but passed the leading women on the technical downhills. I seem to be able to go faster there,” she says. “Everywhere I travel, I try to do trail runs, because it’s a great way to get out and see places, but I am trying to be smart with races. I would race every weekend if I could, but I know that’s not healthy – and I want to see how far I can go in the sport.”

Looking ahead, Cana says her preference now definitely lies in running rather than paddling. “During school I couldn’t choose a favourite, but now I really do prefer my running. Canoeing in the Western Cape is not as supported as back home in KZN, whereas trail running here is much bigger, with a great vibe and social aspect. Also, it’s a lot easier to pick up your shoes and hop out on to the mountain, versus taking your boat and equipment to a dam!”