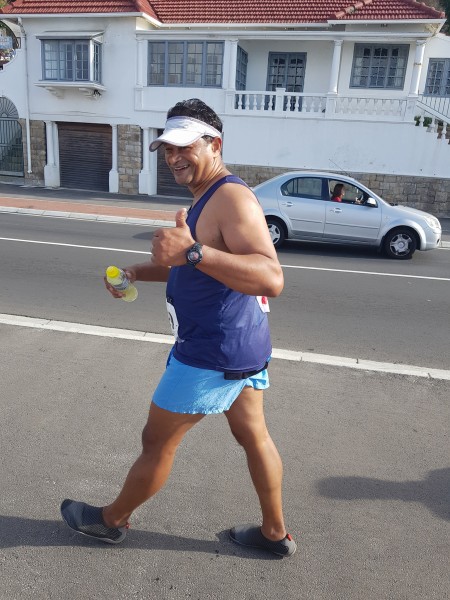 Three years ago well known back-of-pack runner Keith Solomon lost his great running friend Malcolm Marks, and every step he runs these days is in memory of their incredible friendship. – BY PJ MOSES

Every runner soon finds people who share their passion for running when they get into this sport, but the really fortunate ones make actual friends who become more than just ‘sole mates’ on the roads or trails. That is why from the moment Keith Solomon met his late friend Malcolm Marks at a race, they were inseparable. “We used to call each other ‘Munchie’ and always had a lot of fun during races,” says Keith. “Malcolm would do silly things like try and hide behind a lamp pole or come up with funny definitions for road signs along the route.”

There was no distance that the duo would not take on, and their encouragement of one another helped during the tougher sections of ultra or multi-day races. “We always supported each other in our running. Sometimes Malcolm would do more mileage than me and at other times I would do more than him, but there was never any envy or competition or anything like that.”

Taken Too Soon
Sadly, their long running partnership was broken when Malcolm suddenly passed away in 2015, a week after what would be their final run together. “I couldn’t believe it. We were still planning what adventures we were going to try after his retirement, which wasn’t far off. He was looking forward to travelling overseas for running, especially to run on the Great Wall of China.”

At first Keith found it hard to return to running following Malcolm’s passing, but eventually he decided to continue, because that is what his friend would have wanted. And every step would be in memory of their friendship. At the multi-day circuit races that both loved so much, Keith stuck to their agreed total of 50km per day, even though he could do more. “I didn’t want to do any more than what we used to do together, and I would usually finish my total distance with a day to spare.”

“I finally broke this mourning period of the past three years at a recent six-day race in Germiston, when I did an extra 50km to finish with a total of 350km. After that last lap, I looked up and said, ‘Munchie, this one was for you!’ Now I want to organise a multi-day race in Cape Town, as a way of remembering Malcolm. I know that he would look down on us with a smile and shake his head saying: ‘Look at these moegoes!’ That will be a really special race for me.”

Mind Over Matter
Keith has always been active, playing soccer and hockey, and venturing into cycling – he is a nine-time Cape Town Cycle Tour finisher – before the running bug bit in 1998. He originally joined Atlantic AC, then ran for Hewat AC, Pinelands AC and Central AC before ultimately returning to Pinelands. In that time, he has attempted Two Oceans and Comrades many times, successfully finishing Oceans once and Comrades twice, but he prefers the challenges of the circuit races. “There is so much opportunity to test yourself and the mental side of the races are very tough. To get up every day and do a marathon or more is not easy on your body or your mind.”

He averages about two races a week and will do anything from 10km up to whatever distance is on offer, but he has had to be a bit more careful in recent times after developing a condition known as Athletic Heart Syndrome (AHS), or ‘Athlete’s Heart.’ This means the heart is enlarged, and the resting heart rate is lower than normal. “I only discovered this after fainting during a run at Rondebosch Common. The doctors struggled to find what caused me to faint, but after many inconclusive tests, they asked me what I do to keep busy and I said I’m a runner. Then they smiled and said, ‘Ah, you have Athlete’s Heart!’ At first, I thought they were taking the Mickey out of me, until I Googled it and found that it is a real thing.”

Keith says he prefers simplicity to complications in his life and in his running. “I don’t have a special diet and I don’t use supplements. My shoes are neutral, with a minimal sole. When I run now, I don’t overexert, I just run at an even and slow pace from start to finish. I only have two speeds: Slow and stop! Yes, I run a lot, but I don’t believe in punishing myself, because running is about the joy, not the pain. That’s why I always tell people to check the fine print on the entry form, because I am sure it states that the bailer’s bus is included in the entry fee. I make use of the bus when I feel like it, to relax and get full value for my money! And when people ask me what training programme I follow, I just say I run every weekend and rest in between. Simplicity.”