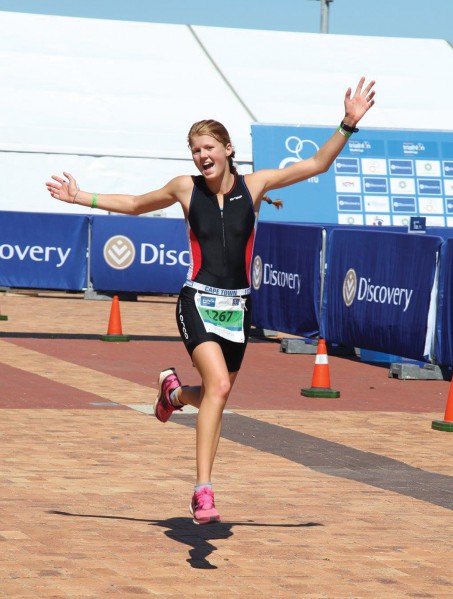 Whether it is triathlons, trail running or life-saving competitions, Linda Detering has the talent and potential to become a major force in every sport she tries. – BY PJ MOSES

With her red hair blowing in the wind and a steely look in her eyes, Linda Detering has in a still short sporting career proven that she is a force to be reckoned with. Winning has become a bit of a habit, and she has collected a number of podiums over the course of the last two years, including taking first place over the short distances at the Old Mutual Two Oceans and Volunteer Wildfire Services (VWS) trail races in 2017. This year she maintained that form by placing second at the Two Oceans race, and once again taking victory at VWS.

Now most people would be happy with talent in one sport, but this 18-year-old ‘wunderkind’ decided to give multisport a go as well, after watching some of her friends participating in a triathlon. With the help of Mike Reddington of the Embark Triathlon Club, she was able to win the Freshpak Fitness Festival sprint triathlon last September, and followed that success by entering the IRONMAN 70.3 race in East London in January. Surprising even herself, she finished second in her age group, and earned herself a slot at the 70.3 World Championships to be held this coming September in PE. “I never expected to do that well. It was just a bucket list item that I wanted to tick off, but naturally I am happy and excited with how it all worked out in the end,” says Linda.

With that success still fresh, Linda took on a new challenge at the Walker Bay Extreme Big 6 Challenge earlier this year, where competitors had to do six events over four days. “It is a whole weekend of adventure and you have to do a mountain bike race, a swimming leg, a triathlon, a street mile run, a run/swim/run, and a trail run. It was tough and very tiring, but I managed to finish in second spot overall in the women’s division. It is not always about chasing podiums for me, but when it is there to take, I won’t let it slip by. It just adds to the fun I am having out there.”

GAME FOR ANYTHING
Born close to Munich in Germany, Linda and her family moved to Cape Town in 2011. The eldest of three kids, she’s always been active, with her main sport being horse-riding when still living in Germany. However, the warmer SA climate and the beautiful mountains around her Hout Bay home inspired her to try new sports, including running, cycling, swimming, surfing, lifesaving, water-skiing, paragliding and skydiving! “In South Africa there is just so much more to do, and I love being outdoors. I’ve also made so many friends doing all of these things, and nothing beats the vibe around an active lifestyle. But I still find time to relax as well: I love movie nights with my family, or socialising with my friends, also reading good books and taking my dogs for long walks.”

Unsurprisingly, trail running and triathlon are not the only sports that Linda excels at. She is also part of the Llandudno Lifesaving Club, and at this year’s SA Lifesaving Champs, she won both the junior and senior women’s 2km beach runs, on the same day. “It was 500m loops on the beach and the crowd really helped me, because the atmosphere was so fantastic. I knew this was my last opportunity to compete in both events, so even with little turn-around time between races, I just gave it my all.”

INSPIRATION AT HAND
In spite of all the success Linda has enjoyed in a short period, there have also been a few low points and disappointments, but she stays motivated, and gets herself race-ready, by watching one of her favourite videos on YouTube, called Rise and Shine. “It puts me in the right frame of mind, and if things get really tough, I just take a deep breath and look around me. The beauty of nature reminds me why I am doing this. I do it because I love it, and that there’s nowhere else I would rather be.”

With her focus currently on training for the 70.3 World Champs, she says she knows that finding balance is of the utmost importance, too, if you want to be at your best. “I think there is a time and a place for everything, and you have to get your priorities straight. You can’t be out the whole night before a race and expect to do well the next day. People just need to choose what is important to them, but never forget to have fun. Do the things you love and don’t force yourself to do anything that you don’t want to.”