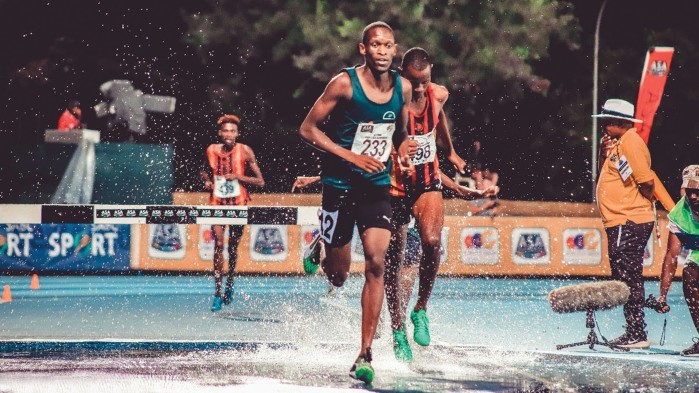 After surviving a brutal attack in February that had many thinking his running career was prematurely over, Thabang Mosiako not only returned to running incredibly quickly, but also stronger than before, and he says it is all down to magnesium. – BY SEAN FALCONER

The South African running community was shaken in February when news broke of an apparent racially-motivated attack near the North West University campus in Potchefstroom on two well-known black athletes, SA 5000m Champion Thabang Mosiako and SA 3000m Steeple Chase champion Rantso Mokopane, along with their friend Sandy Londt. The initial reports said that Thabang was in a coma after suffering severe head injuries, having had his head repeatedly kicked and bashed against the pavement. There were doubts whether he would recover from his head injuries, let alone run competitively again.

In 2017 Thabang claimed the men’s 5000m title at the SA Senior Track and Field Champs, putting in a stunning last lap to close down Olympian Elroy Gelant’s 200m lead. Later that year he won the FNB Joburg 10 CITYRUN, and in January the second-year human resource development student at Boston City campus in Potchefstroom won the SA Cross Country Trials to qualify for the SA team going to the CAA African Cross Country Champs in Algeria in March, but the brutal attack seemed to have put an end to those plans.

Amazingly, though, he made an incredible recovery from his injuries and not only resumed running, but made it to the African Champs just over a month after the attack, where he finished a very creditable 26th and third South African home in the men’s 10km. “My preparation did not go to plan because of the attack, but after running my race, I was so happy, because I had managed to finish, and under the top 30 as well. It really showed me that I can run again,” says Thabang, who went on to finish 12th and fourth South African in the FNB Cape Town 12 ONERUN in May.

THE FATEFUL NIGHT
According to Rantso, the three friends stopped at Varsity Café in the early hours of the morning to buy some food. While Thabang and Sandy waited outside, he found himself in the queue to pay behind three apparently drunk white men, one of whom began swearing at the elderly black woman working the till. That prompted Rantso to intervene. “I asked them can you please pay and go, because what you guys are doing is not right, but those guys got angry. There was another white guy behind me in the queue, and he also said to the drunk guy to stop, but nothing happened to him. The drunk guy just focused on me.”

When Rantso came outside, the group had grown to about 10 men who then attacked him, so Thabang and Sandy tried to help their friend. Passing police officers came and stopped the fight, but appeared to take the side of the white men. “The police started beating us with batons, as if we were the ones who were in the wrong,” says Rantso. Having received no help from the police, the three tried to get away from their attackers, who began chasing them. “It happened so quickly, and then we were running for our lives,” says Thabang.

Shockingly, Rantso says they came across another police vehicle and asked desperately for help, but were ignored, and stopping for help just allowed the chasers to catch them once the police drove away. “Sandy went one way and Thabang went the other. I was fighting two, but then they left me and went to Thabang. I saw them hitting and kicking him, and when they finished he was lying unconscious with blood on his head. Then more police came and they called the ambulance.”

RECOVERY BEGINS
Thabang woke up the next day in hospital and says while lying there, his thoughts turned to the attack, and how he had kept thinking about his wife Thandi (who was SA under-23 Champion over 1500m last year), and their young son Mpho. “I thought I would die there, and kept thinking what would happen to them if I lost my life,” he says. Fortunately, his injuries were not as severe as initially feared, so he was up and about a few days after the attack, but he was left with sever headaches, especially when he tried running, and believed his opportunity to represent his country in Algeria was gone. “I was overcome with despondency, and I had given up on the Algeria trip,” he says.

Then out of the blue he was contacted by Benita Niemann of Magnesium Café and everything changed. “She tracked me down before African Champs and told me to try the product, that I will see the results.” Having heard of the attack and Thabang’s struggle to recover, Benita had decided to offer what help she could. “It was really sad for me, because when I first made contact with Thabang, he had two hands full of tablets, and not one was magnesium. As soon as he started to drink the magnesium, he started to recover. People don’t understand the importance of magnesium,” she says.

Thabang continues the story: “Everyone thought I would only be running again next year, or at least after six months of recovery, but I went to African Champs. What really helped me recover was the magnesium products, and I can’t thank Benita and Magnesium Café enough. It took away the headaches, and gave me the energy and focus I needed in training. Physically I am OK now. The terrible headaches I was getting are not so bad now, only coming now and again, and I plan to keep using the product, because it saved my career!”

Unsurprisingly, his training mates noticed his rapid recovery and quick return to form, and began asking him about the wonder supplements he was taking. That saw coach Springs Phakathi ask Benita if she would consider sponsoring more of his training group, so now Rantso, Thandi and Puseletso Mofokeng are all using her products, and Rantso is equally effusive about the effects of magnesium. “It seemed to really help Thabang. Initially he used to stop regularly in jogs due to the headaches, but gradually improved once he started using magnesium. Previously I never believed in supplements, but now I’m also using magnesium, because it’s the best thing I have found for recovery and energy.”

ENDURING FRIENDSHIP
No suspects have been arrested following the attack, in spite of Rantso following up with the police and university authorities, and he says the latest information they have points to the fact that it may have been men from Pretoria, with ties to Potch students, that attacked them. “Ironically, Thabang always avoided coming out in the dorp at night due to previous attacks or incidents like this, usually with drunk guys. To be honest, I don’t go out at night any more, because I don’t feel safe.”

He says he wished the attack had not led to his friend suffering so much, but he nevertheless does not regret getting involved in the café. “The first thing I thought was, what if that had been my mother, just doing her job… so I had to speak up, because we must protect people that can’t stand up for themselves. I had no intention to fight, but I am still responsible for what happened. I used to think maybe we were at the wrong place at the wrong time, but seeing my friend almost get killed made me stop and say this must not happen again, and that is what I am fighting for.”

Meanwhile, Thabang says the physical injuries of the attack may now be largely healed, but the psychological and emotional scars are still healing. “When people talk about the attack, it really hurts me, because even today nobody has been arrested. It hurts because I haven’t got justice yet. Still, I am really proud of Rantso for standing up for that cashier, even though we got attacked. He is a true friend.”