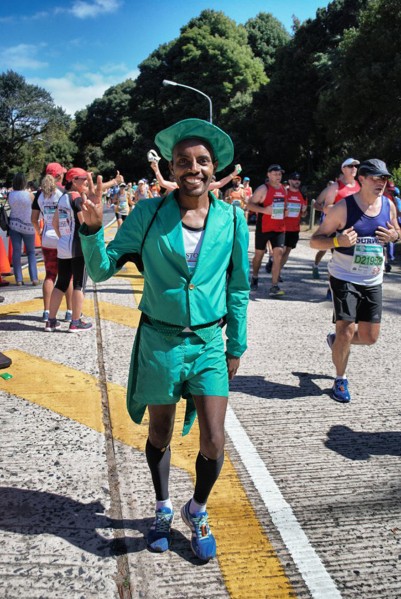 Cape Town-based Ethiopian astrophysicist Kamil Suleiman ran the recent London Marathon with a most unusual record in his sights. – BY PJ MOSES

Kamil believes that everything is possible, and that nobody can deny you your place in this world if you do not allow them to. “I saw successful people who looked just like me all around when I was growing up. I never felt inferior to anybody, and I want to give that gift to every child struggling against injustice and oppression in this world.” This bold mission statement led him to the London Marathon in April and an attempt at a Guinness World Record (GWR): He wanted to become the fastest runner in a marathon dressed as an Irish Leprechaun!

The existing GWR for this is 2:59:30, and Kamil’s motivation to chase it was not just because he has a good sense of humour, but because he knew this was a good opportunity for him and his comrades in the Runners for the Freedom of Palestine (RFP) movement to spread awareness of their cause on a major world stage. “I gave it my all and came within 15 seconds of breaking the record, but unfortunately I could not get it done. I did the training and prepared properly, but it was a late morning start and a record warm day for London.”

Kamil finished in 2:59:45, complete with costume and flag, in position 1079 out of 40,273 finishers, which put him in the top 3% of the field, but he was nevertheless just a little disappointed. “I was upset about missing the Guinness World Record by just 15 seconds, but I’m super proud for two reasons. One, the record attempt was only a platform – the main goal was to raise awareness about the plight of the people of Palestine by finishing with the Palestinian flag, and the amount of coverage we got was incredible. Two, this was my first sub-3 in a flat marathon, and there’s no hiding from the continuous work by the same group of muscles. Continually telling myself to keep pushing till the end, despite the exhaustion, was so hard, but I didn’t accept defeat till the finishing line, and I am proud of that.”

The Plan is Born
Growing up in Addis Ababa, Ethiopia, Kamil played soccer and other sports, but running didn’t interest him back then. However, after winning a scholarship to continue his studies in Astrophysics at the University of Cape Town and relocating to South Africa, he slowly became aware of the Cape running culture. It still took him almost a decade of living in Cape Town before he would fall in love with the sport, but eventually he began running for fun in 2012. Then in January 2014 decided to take it more seriously and joined Itheko AC. “I was not a natural, I think, and finished my first marathon in a slow 4:39, but the flame had been lit inside of me to become a better runner.” With the help of his coach, Farouk Meyer, he trained hard and improved massively to clock a PB of 2:56.

The idea for the ‘Leprechaun Run’ came from his friend Safoudien after they checked the Guinness records. “I wanted to go for the fastest marathon time while using a skipping rope, because I loved skipping as a child and still skip when training. In practical terms, however, we decided that it would not be possible for me to skip and take the flag near the end of the race, so I postponed that idea and decided on the Leprechaun idea instead. Then, getting a costume made the way the GWR wanted and getting a lucky race entry through a charity were also obstacles we had to overcome.” Thankfully, the ‘luck of the Irish’ was with the group and everything worked out.

Motivation and Support
On race day, Kamil had a decent first 32km, but from there the heat began getting to him and his legs started to cramp. He says it took all his focus and determination not to slow down. “I knew my friend and RFP colleague Rabia Harris was waiting to give me the flag for the last kilometre, and that thought kept me focussed – I had the opportunity to be the voice of the voiceless, and I could not waste it. I also thought about everybody who got behind our cause, and I didn’t want to let them down. It was not a pressure, it was an energy booster, and I can’t thank everyone enough.”

“I also need to give Rabia special credit here. The race was heavily guarded, with both visible and hidden security personnel, and the cops near my supporters kept moving the rope or stripe tape to prevent the runners from getting close to the spectators. Rabia the rebel saw no choice but to jump over the fence to hand the flag over to me. If she hadn’t done that, I would have had to crawl under the rope, which would have probably triggered the really bad cramp that then thankfully only happened after I finished!”