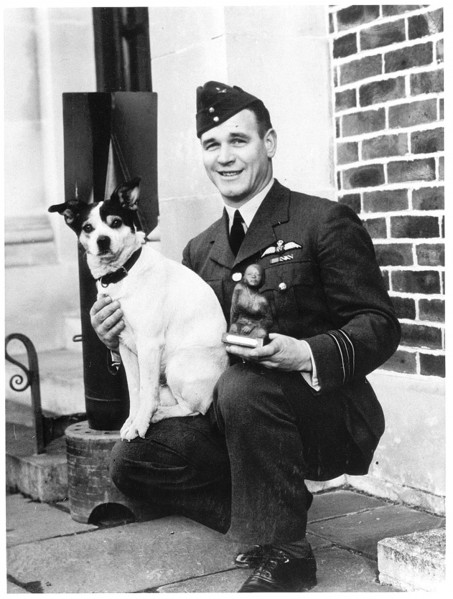 Many South Africans run races to raise funds for a charity or cause, but most choose a cause in South Africa, whereas Yvonne Malan is running to support a museum in Great Britain dedicated to the Second World War. There’s an interesting story behind her choice. – BY SEAN FALCONER

In June 1940, the world stood on the brink of disaster. Nazi Germany had conquered most of Europe, and Britain and her former colonies, including South Africa, were the only opposition left to Adolf Hitler’s forces. The British Army had just been miraculously rescued from the beaches of Dunkirk in France, and the Battle of Britain was about to commence, with the fighter squadrons of the Royal Air Force tasked with stopping the German Luftwaffe from gaining air superiority over Britain, which would open the door for a German invasion.

Leading one of those squadrons was South African fighter ace Adolph ‘Sailor’ Malan, and by the end of the Battle he was one of the highest-scoring, most decorated and best known RAF aces. He went on to become one of the war’s leading tacticians in air-fighting, with his Ten Rules for Air Fighting being hung up in most fighter squadron’s orderly rooms, and he was hero-worshipped in Britain. Today, the Malan name is still revered in the UK, whereas he is a largely forgotten figure in his own country, but one runner is trying to change that.

FAMILY HERITAGE
A distant relative of Sailor, Yvonne Malan is running three races this year in South Africa with links to his history, in an effort to raise money for the Kent Battle of Britain Museum in the UK, and to commemorate Sailor’s important role in history. “I’ve already done the Peninsula Half Marathon, which finishes in Simonstown, where Sailor joined the Merchant Marine at age 14. That’s why he later picked up his nickname when he joined the RAF. Next was the Safari Half Marathon in Wellington, where he was born, and the third race will be the Cape Town Marathon, because that’s where he led huge rallies for the Torch Commando in the fifties, speaking out against the Apartheid policies of the then government,” says Yvonne.

“I have created an online donation page where people can support my runs in order to raise my target of £500 for the museum, because if Germany had won the Battle of Britain, the consequences would have been catastrophic globally. Even though the Battle is more British history, it is actually global history, and still relevant to all of us today. Many South Africans were involved in the Battle, and the war, and that should be commemorated, so I am glad to see that the movie Dunkirk has also sparked more interest in that period of history again.”

RUNNING ACADEMIC
Born in Somerset West, Yvonne initially studied at Stellenbosch University before heading to Oxford University in 2005, going on complete a doctorate. She now works as an academic and regularly travels internationally for work, but tries to get back to SA and fit in as many races she can. “I started running in 1999 and ran my first Two Oceans and Comrades in 2000. I have spent much of the last 13 years abroad, and it’s hard to keep your running going in the winter months overseas, but when I am here, I try to run races in support of a charity. This year I wanted to do something a bit different, and I think Sailor and his fellow pilots deserve to be remembered.”

She says Sailor is actually better known in the UK, and she has often been asked if there is a connection. “When I met the late Sir Roger Bannister for the first time in Oxford, he actually asked if I am ‘related to that Malan,’ because he grew up during the war years. If you look at all the books on the Battle of Britain and the biographies on Sailor, you see that he was hugely respected as a leader and there was an aura around him. However, he has largely been erased from the history books, because of his involvement with the Torch Commando.”

“It was one of the first non-racial movements in the country, mostly consisting of war veterans, and they basically said we fought fascism in Europe, only to return to SA and find a fascist government in control, and we’re not standing for it. They had huge rallies and became an outspoken threat to the government, especially Sailor, because he was an articulate, revered war hero with Afrikaner heritage, so the movement was undermined and later banned. Sailor was vilified by the Afrikaner press and withdrew from politics, and I think he has largely been forgotten, even erased, because he was inconvenient… one of many whites that stood up against Apartheid back then, and even today that makes him inconvenient to many in the current regime. I hope to change that perception this year.”

You can support Yvonne’s fundraising runs at  https://mydonate.bt.com/fundraisers/yvonnemalan1