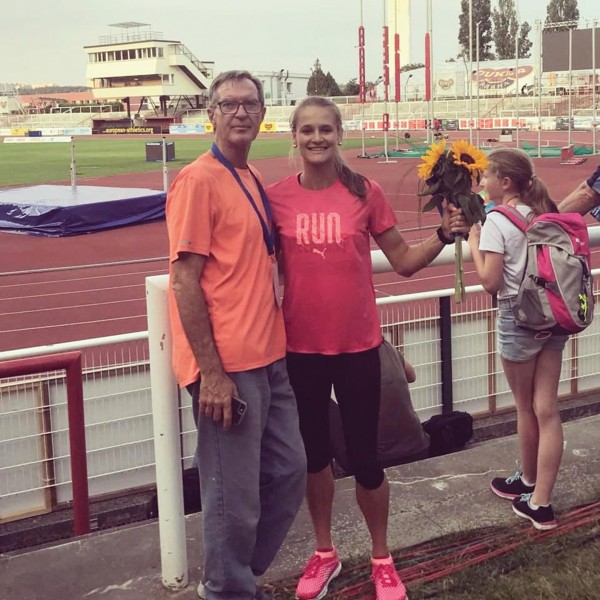 After coming back from an operation on her foot and having to learn to walk again, multiple SA Champion Rikenette Steenkamp had been frustratingly close to breaking the 21-year-old SA Record for the women’s 100m hurdles, but in June she finally claimed the record for herself. – BY SEAN FALCONER & WILHELM DE SWARDT

If ever an athlete deserved to break an SA Record, it was Rikenette Steenkamp. Throughout the 2017 season she had been knocking on the proverbial door of dipping under 13 seconds and improving on Corien Botha’s SA Record of 12.94 seconds, which had stood since 1998, and the same had continued in 2018. She had finally broken that 13-second barrier, and then had actually run a 12.92, at the Resisprint International Meeting in Switzerland, but the wind from behind was unfortunately too strong for record purposes.

Undaunted, Rikenette (26) continued chasing the record, and in June she finally did it at the Memorial Josefa Odlozila Meeting in Prague. Former World Junior Champion Elvira Herman of Belarus won the race in 12.69, with Rikenette finishing second in a brilliant new SA Record of 12.91 – and that in spite of not having the best of starts, coming out of the blocks second-last, but still leading over the first four hurdles.

“To at long last break Corien Botha’s record was amazing. I have dreamt of doing so for the last seven years. What excites me is that it was not the perfect race. My technique going over the first four hurdles was possibly the best I have ever done, but I was coming onto the hurdles so fast that it led to me losing a bit of rhythm. Then I hit the sixth hurdle – I can’t remember when last that happened!” says Rikenette. “I was quite emotional afterwards, especially when I met up with my coach, Hennie Kriel. I owe so much to him for the way he guided me to break the record.”

Starting from Scratch
What makes Rikenette’s SA Record all the more impressive is the fact that just two years ago she had to learn to walk properly again after an operation on her foot! Having won the SA Schools title in 2009, then recording a hat-trick of titles in 2010 by claiming the SA Schools, Junior and Senior titles in her matric year, then going on claim the gold medal at the 2014 African Champs in Morocco, she saw her career derailed by constant pain in her foot.

“After a six-week off-season break in September 2014, I started training again, but slight pains in my right ankle started bothering me. Despite consulting various physios and doctors, the pain gradually increased. In early 2015, I tried training three times a week at about 60% intensity, but that was just frustrating, and at the end of 2015 I consulted a foot specialist, Dr Fief Ferreira, and he finally identified the problem,” says Rikenette.

“I had an extra piece of bone about 15mm long in my ankle, which impaired my mobility and therefore caused a lot of pain when running. There was no other option than to do surgery, followed by six weeks’ bed rest, two months’ physiotherapy and two months of swimming, whilst working with a biokineticist. That rehabilitation period was difficult, although I knew it would all be worth it, but I could only return to the track in September 2016! There were moments when I thought I won’t ever run again, but I am so blessed with an amazing family and support system that carried me through this time. They always helped me to focus on the next part of the process, and we celebrated every small victory.”

Bouncing Back Strongly
Today, the pain and frustration of her operation and recovery are distant reminders of how far she has come, spurring her on to still greater achievements, and up to her record run in Prague, Rikenette had posted a remarkable series of results in European races, winning four races and finishing second in a further two. Also, it shows how far she has come, in that posting a second sub-13 in a week, at the Diamond League Meeting in Stockholm, just after the record run, actually left her feeling a bit disappointed…

“I guess I should be satisfied with a time of 12.99, as it is only the third time officially that I managed to dip under 13 seconds, but after my 12.91 in Prague, I know that I am capable of running faster times. Still, I am overwhelmed with thankfulness after the setbacks and challenges that I’ve been through the last two years. The biggest lesson I have learnt is that it is OK not to have everything under control. I view things very differently now. Life almost never works out completely as planned, so I enjoy my running a lot more now when I am relaxed and make jokes. I also don’t see mistakes or bad races as failures. It is part of sport to go through processes, and it’s not possible to run a personal best in every race.”

Postscript: Rikenette Shatter Own Record
Having set a new SA Record of 12.91 in the 100m hurdles just a few weeks earlier in Prague, Rikenette produced another breakthrough performance on 1 July in Switzerland. She obliterated her still new record with a 12.81 in the final of the Resisprint International meeting in La Chaux-de-Fonds, after clocking 12.70 in the qualifying heat, but that mark was run with the benefit of a tailwind and is not record-legal.